The Triumph of Cherries

Surviving bad weather and soft prices, the orchards of Traverse City, Michigan, are thriving once again—all the more reason to celebrate the quintessential summer fruit they grow. 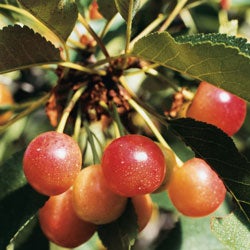 “Why don’t you take my truck for a spin around the orchard?” cherry farmer Glenn LaCross proposes, tossing me the keys to his taupe Chevy pickup. It’s a clear, 80-degree Saturday in early July, and soon I’m navigating the rig along deep ruts in LaCross’s 75-acre orchard in Leelanau County, Michigan, about 250 miles northwest of Detroit and part of Traverse City—the so-called Sour Cherry Capital of the World. As I pass row after row of trees thickly dotted with thousands of shiny red orbs, I find it hard to believe that in the summer of 2002 these same branches were nearly barren. According to LaCross, most of the county’s cherry crop (about 95 percent) was wiped out that year, owing to freak climatic conditions: a warm period that encouraged early budding, followed by a prolonged spell of cold. Many farmers went bankrupt, and the local economy suffered greatly. The weather gods have been more sympathetic lately, however, cooperating to foster better crops.

As I maneuver the pickup back toward where LaCross is waiting, I pop into my mouth a fat, glistening, black sweet cherry from the basket on the seat next to me. I bite through the thin layer of smooth skin, and the fruit’s sweet-tart nature reveals itself; its meaty texture is a reward on its own. A crimson drop of juice falls on my T-shirt, and it occurs to me that cherries just may be the ultimate fruit of the American summer.

Scholars consider the cherry—a member of the genus Prunus, which comprises other stone fruits, like plums, peaches, and apricots—to be one of the world’s oldest fruits, with probable origins in prehistoric Asia Minor. The word cherry is likely derived from the name of an ancient Greek city, Kerasounta, where the fruit once thrived. In the first century A.D., Pliny reported that at least eight varieties of cherry were being cultivated in Rome, among them the ancestors of the two main types of cherry cultivated today: the sweet cherry (Prunus avium) and the sour (Prunus cerasus).

By the 16th century, cherries were being grown in Kent, England, and by the 17th century, colonists had brought at least two dozen varieties to New England. Not long afterward, settlers from Normandy planted both sweet cherries and sour ones around the Great Lakes. Their decision was wise. There, the “Great Lakes effect,” a climate phenomenon characterized by cool periods in the spring, extended warm periods in the summer, and dry, arctic air in the winter, proved to be highly favorable to the cultivation of the fruit. The sour variety, its trees hardier and shorter (about 20 feet high) than the sweet’s (about 25 feet), flourished especially along Lake Michigan’s shores. The success of that variety in that location encouraged the planting, in 1852, of Michigan’s first commercial sour cherry orchard, on the 20-mile-long Old Mission Peninsula, which juts north of Traverse City into the waters of Grand Traverse Bay, off Lake Michigan.

Today, at least two dozen varieties of sweet cherry and two types of sour cherry are grown commercially in the United States, mainly in Michigan and on the West Coast. The primary sweet cherry is the bing (named in 1875 for a Chinese worker in an Oregon orchard); the primary sour is the montmorency, which originated in the French valley of the same name and is now the star of about 99 percent of the commercial orchards in the Traverse City area.

When it comes to shape and color, it’s easy to differentiate between the two main types of cherry: sours tend to be heart shaped and an orange-kissed red, while sweets are often globular and dark, in the burgundy-black range. When it comes to taste, however, the difference can be subtle; although clear-cut examples of each genre exist, some sour cherry varieties have juice tinged with sweetness, and vice versa. Culinary authority Waverley Root, in his encyclopedic work_ Food: An Authoritative and Visual History and Dictionary of the Foods of the World _(Smithmark Publishing, 1996), suggested that sour cherries were somewhat misnamed: “[What] the word [sour] means in this case is really acid,” he wrote. Indeed, most Traverse City locals refer to sour cherries as “tarts”; they are best suited for cooking. Their acidity lends a complex, nuanced flavor to baked goods, and they are more delicate than sweet cherries but hold their shape better when heated. Sweet cherries may also be cooked, but given their more straightforward, even sugary, flavor, most people prefer to eat them in their natural state.

The joy of eating cherries derives, of course, from the serious business of growing them. Jim Nugent, a scientist at Northwestern Michigan Horticultural Research Station, in Traverse City, is an expert on the matter. During my trip, I stopped by his office to learn more about commercial cherry farming, which can apparently be a trying endeavor in many ways. First, Nugent explains, it’s expensive, and it requires a major commitment: a cherry tree, whose average life span is 30 years, takes about seven years to bear fruit. (By comparison, an apple tree takes three years; the life span of most apple trees is similar to the cherry’s.) Then there are the diseases particular to cherry trees, which are difficult to control, like cherry leaf spot, in which a fungus infecting a single leaf may inhibit the ripening of an entire tree. Diligent pruning is also a must: Cherry leaves are plentiful and can block sunlight in a way that prevents the fruit from ripening. The harvesting of sours is perhaps the easiest part of raising the fruit; it is usually done by a long-armed machine that grabs the base of each tree and shakes it until the ripe fruit falls onto a “catching frame” (which resembles a tarp shaped like an upside-down umbrella) spread on the ground or, sometimes, attached directly to a tree. Sweet cherries for the fresh market are generally harvested by hand, but in Michigan more than 90 percent of the sweets grown are sold to processors; those too are mostly harvested by mechanical means.

I ask Nugent about the disastrous harvest of 2002. A couple of unseasonably warm weeks in March that year, he tells me, fooled many trees into budding early, and when low temperatures returned, lasting well into the spring, the fruit already forming was destroyed. But Nugent points out that Michigan’s cherry industry has suffered other setbacks as well. “Cherry growers had a big heyday in the late ’70s,” he says, “but we overplanted trees.” As a result, the ’80s brought a glut of cherries, and prices dropped so far that some farmers decided not to harvest their orchards at all. About half the area’s cherry farmers got out of the business, in fact, but, Nugent notes, that wasn’t necessarily bad for the industry: those who survived the 2002 season now find the market much easier to manage.

Glenn LaCross, is one of the 650 or so cherry growers who have weathered all these travails. A Michigan native who loves horses, he leased his first farm in 1962 when he was just 16, mostly to have a place where he could ride. A cherry orchard happened to be on the property, though, and LaCross soon started learning how to tend the trees. After graduating from college and spending a few years in the real estate business, he realized that he’d fallen in love with cherry farming; he dedicated himself to it full-time in 1975. LaCross and his wife, Judy, readily acknowledge the hardships of cherry farming and admit that 2002 was particularly difficult, but they consider themselves tied to the land and, more important, to the cherry fruit. “It’s a lot of hard work, especially in the summer,” Judy confides. “I haven’t had a summer off in a very long time. But then, I am just a simple country girl.” LaCross adds, “We really enjoy fruit farming, and we like living the business.”

Over the past few years, the LaCrosses have wisely bolstered their bottom line by multiplying their offerings. They now also provide brined sweet cherries to food manufacturers, who use them to flavor products like yogurt and ice cream. And in 1998 the LaCrosses made the leap into the juice business. Following reports that montmorencys have anti-inflammatory properties that may be effective against arthritis and gout and contain significant quantities of the antioxidant melatonin, which may be used in the treatment of sleep disorders, the demand for the juice of tart cherries rose considerably. “Doctors buy it by the case, and it is strongly recommended by chiropractors. It really is a big boom,” says LaCross, who was one of the first of many Traverse City farmers who jumped on the bandwagon.

There is no place better for farmers, locals, and visitors alike to rejoice in the revival of Michigan’s cherry industry than the National Cherry Festival, an eight-day party held annually in Traverse City at the start of cherry season. Today marks the opening of the event, and I head for the festivities with Judy LaCross. Downtown Traverse City, idyllically set on Grand Traverse Bay, has a postcard-perfect, “Main Street, U.S.A.” appeal. As LaCross and I walk past shops whose windows display items like cherry-themed footrests and martini glasses, she tells me that this year’s festival consists of more than 150 events, including a cherry pit-spitting contest, a concert by Loverboy, and orchard tours. It will also likely draw more than half a million people and bring $15 million to $20 million to the region.

As we arrive at the fairgrounds, we spot the reigning monarch, Ashley Prusick, a statuesque young lady with practiced poise who has made countless promotional appearances on behalf of Michigan cherries this year. As Prusick is interviewed by a crew from the Food Network, her eager court (four would-be queens, all sponsored by local businesses and each of them coveting the $8,000 college scholarship that comes with the title) scoops ice cream at the opening ceremony.

I meet Patty LaNoue Stearns, the food editor of Traverse magazine. She is an unabashed cherry enthusiast; her book Cherry Home Companion (Arbutus Press, 2002) contains 132 cherry recipes from local chefs. We marvel at the hordes who mob the food stands selling slices of sour cherry pie, soft ice cream cherry shortcakes, even hamburgers made with ground cherries and served with cherry mustard. Before we part ways, Stearns tells me not to miss the pie-eating contest the next day.

Some 20 hours later, I show up as advised. “Walk, do not run, and come on and eat cherry pie!” yells Nancy Grimm, who has been managing the event since the late ’80s. Known around here as “the Cherry Pie Lady,” she has lots of tips for the entrants, who are as young as two and as old as 45 or thereabouts. “The biggest rule of all is to chew and swallow,” she tells everyone. Contestants take part in heats, grouped by age. The intensity increases as the heats progress. I’m almost hoarse from cheering by the time the 16-year-olds are up. One blonde sporting a high ponytail, low-rise jeans, and shimmery blue eye shadow takes a seat at the table. Her insouciance is immediately apparent. Then, as soon as “Go!” is shouted, she starts eating that pie as if her life depended on it. After she’s finished, she shoots out of her chair and throws her hand up in a positively Olympian gesture. When she is crowned the winner, we learn that she is Casey Williamson from Riverview, Michigan. All of a sudden she looks much less like Britney Spears and much more like a happy young girl: a living illustration, Grimm observes, of what cherry eating can bring about in all of us. Grimm then proceeds to encourage the winner and, indeed, cherry lovers everywhere: “Show us your cherry pie face!”