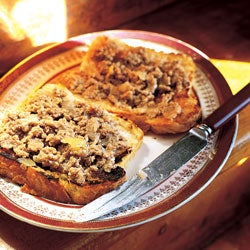 Cretons is similar to rillettes, the pate-like French mixture of pounded meat and seasoned fat, but has a crumbly texture. Michel Careau, of La Ferme Enchantee restaurant, gave us his aunt Marie’s recipe.