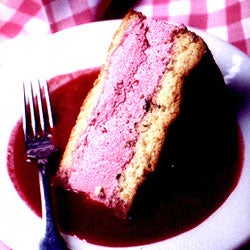 Much speculation surrounds the origin of this sweet treat's name. While some believe that it took its name from Queen Charlotte of the United Kingdom (1744-1818), others believe it was created by Russian Czar Alexander I's French chef Marie Antoine Careme (1784-1833), and named after the Czar's sister-in-law, Charlotte of Prussia. See the recipe for Raspberry Charlotte ». Christopher Hirsheimer
SHARE

The Les Halles quarter of Paris may no longer have its famed food market, but its spirit lives on in the classic French bistro dishes it inspired, such as this luscious dessert.

For the Raspberry Filling and Sauce