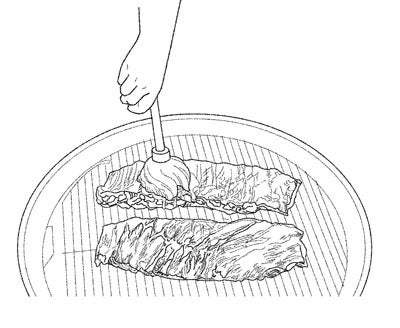 Mopping Mopping is a technique that involves slathering sauce onto the cooking meat with a large basting brush, which adds flavor, makes skin crisp, and, when layered over the rub, creates a nice bark¿the flavorsome crust that develops during the cooking process. According to Amy Mills Tunnicliffe, co-author of Peace, Love & Barbecue (Rodale, 2005), "Mopping adds surface flavor, it's not penetrating. But when you pull pork butt, you're mixing the bark with the internal meat, which is fabulous.". Brenda Weaver
SHARE

Though the terms are often used interchangeably, what separates barbecuing from grilling is low, slow heat and smoke. While grilling requires contact between food and flame, barbecue relies on indirect cooking—putting distance between the coals and the meat, and allowing radiant heat to cook the meat inside a closed chamber. There are other factors to consider while making barbecue: what cut of meat to use; how to prepare it for cooking; how to tend to it during its hours in the smoke; which wood to use; what kind of vessel to cook it in. These are the elements of barbecue greatness, and the following galleries are your guide to success.