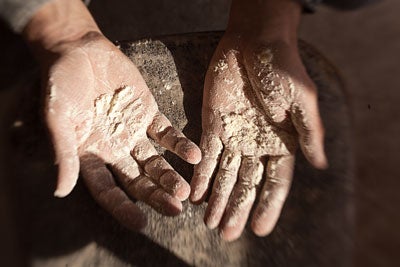 The main ingredient in bread not only affects the loaf’s flavor: it also helps determine its texture, appearance, moisture content, and nutritional quality. One major difference between the many kinds of wheat flours available is protein content, which affects just how easily gluten—those stretchy strands in dough that ultimately form bread’s interior crumb—is made; the more protein in the flour, the more easily gluten forms. All-purpose flour works fine for baking airy breads, like baguettes. Usually a blend of hard and soft wheats, it has a lower protein content than bread flour, which is made with protein-rich hard wheat (ideal for making sturdy rustic loaves). Whole wheat flour is also high in protein; ground with the wheat germ and bran intact, it has a darker color, more pronounced flavor, and more vitamins and minerals. Bread can also be made with flours milled from other cereal grains, with their own special characteristics. Rye flour, for example, creates a sturdy loaf because it absorbs more water than wheat flour does, but it also attracts more natural yeasts, so it’s great for making sourdough starters. Spelt flour, on the other hand, has a higher protein content than wheat flour but, interestingly, forms weak gluten, so spelt loaves tend to be denser, with a pronounced, nutty flavor. While it’s certainly possible to bake artisan bread with commercial flours, many of the movement’s bakers are interested in organic or stone-milled flours for a variety of reasons: no matter what the variety, they are fresher (which translates into more flavorful loaves); they have a higher protein content; and since they aren’t bleached, they still include all the beneficial yeasts and flora, which make them well suited to natural sourdough starters. “One of the goals of commercial milling was to create a consistent product that wouldn’t vary,” says Don Lewis, owner of Wild Hive Farm in Clinton Corners, New York, which mills many varieties of wheat and grain, including many heirlooms that haven’t been grown in the region since industrial milling took over. “But flour changes from season to season and place to place.” The hard red winter wheat Wild Hive mills primarily for bread flour, for example, tends to be harder—or contain more protein—than hard red spring wheat, and bakers have to subtly change their recipes to adapt to the differences. It’s a small sacrifice to make for the beautifully round, earthy flavors of freshly milled flours.