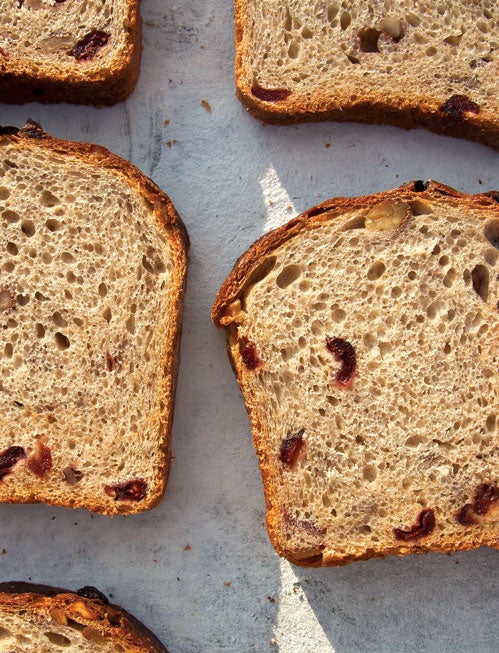 Making bread is simple, but professional bakers use a lot of complicated jargon that can seem overwhelming to novices. These terms, however, help explain the scientific processes at work when making artisan bread; they can also help home bakers understand what to expect each step of the way. First, there’s the starter, often called a levain (in French), a lievito madre (in Italian), or a mother, starter seed, or sourdough starter in English. Starters are made by mixing flour in water to form a pasty mixture; over time the mixture will sour by the process of fermentation as it picks up natural yeasts from the air. As with any fermented food (cheese, wine, pickles, etc.), time, temperature, and humidity can greatly affect how a starter looks on any given day or how a finished loaf turns out. When you’re ready to bake, a portion of your starter is mixed with some fresh flour and water to form a sourdough culture that further ferments, thereby deepening the flavor, for up to 24 hours. This sourdough culture is then combined with more flour and water to make your dough. It’s this two-step process of fermentation that’s responsible for artisan bread’s characteristic, and pleasant, tang. An ideal temperature for feeding your starters and fermenting your sourdough is about 75°, but since home kitchens vary wildly in temperature, we advise letting your starters, sourdoughs, and bread doughs ferment and rise in a cold oven, which keeps a constant temperature that’s slightly above room temperature. (Like many professional bakers, we also add a touch of commercial yeast to our wild yeast sourdoughs, just to ensure a good rise.) The stage where you let a dough rise is called proofing, and it’s so named because you’re allowing the yeast to “prove” it’s alive by raising the dough. If dough doesn’t rise, or proof, long enough, your bread will be dense. The yeast will not have produced enough bubbles, or air pockets, the result of yeast emitting carbon dioxide and alcohol as it metabolizes the sugars in the flour. There is also a stage before kneading dough when you let the just-mixed ingredients rest for 20 minutes to let the flour hydrate in the wet ingredients; this is called autolysis and it’s helpful in producing a smooth, evenly crumbed final product. If you don’t let the flour fully hydrate before kneading, there can be small pockets of raw flour in your dough.