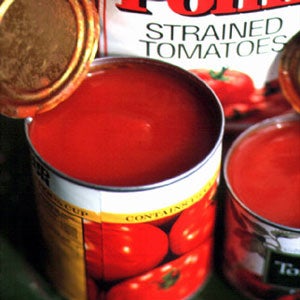 Stocking your kitchen pantry with a few basic but essential ingredients will be helpful in preparing delicious Italian recipes, but remember, the better the quality of the ingredients, the tastier and more authentic the result. You can find most of these items at your local grocer or specialty market.

ANCHOVIES Though often disparaged, anchovies cannot be ignored if you desire authentic Italian flavor—their slightly mysterious taste adds that extra-special something to many dishes. They are usually packed in oil or salt, but Sicily also produces “white anchovies,” filleted and marinated in white vinegar. In a pinch you can use anchovy paste, which has a milder taste and is easy to find.

CANNED TOMATOES A gift to Europe from the New World, the tomato (“pomodoro” in Italian) didn’t really take hold throughout Italy until the early 1900s, when canned tomatoes became widely available. They remain popular in Italian kitchens today, particularly the exquisite san marzanos of Campania, which are considered the finest of all cooking tomatoes. These can be found at your local Italian grocer.

CAPERS These tasty little berries add a zesty punch to your favorite Italian dishes. The bud of a bush found in the Mediterranean, capers are available either pickled in vinegar or packed in salt. Wash well before using to remove the salty flavor of the brine.

CORNMEAL Polenta, a staple in northern Italy, is made with either coarse- or medium-textured cornmeal. Once considered a peasant food, polenta has recently started showing up in upscale restaurants and sophisticated recipes. Cornmeal will last for months if kept in a tightly closed container and stored in a cool, dry place.

HERBS AND SEASONINGS We can’t imagine cooking Italian food without the classic herbs so strongly associated with the authentic dishes of Italy—basil, oregano, sage, rosemary, thyme, and parsley. Dried herbs have a much more robust and concentrated flavor, and should be used more sparingly than fresh herbs. Other important seasonings to have on hand are sea salt, whole black peppercorns, and red pepper flakes, which add just the right amount of heat.

LEGUMES The Italian love affair with beans dates to the early 1500s, when assortments of tasty legumes were introduced to Florence from the New World. Their popularity soared, and by the 17th century they were cultivated throughout Tuscany. An integral part of Italian cuisine—almost as fundamental as pasta—beans are central to hundreds of recipes. The most popular are the small white zolfino, or cannellini; fresh, delicate favas; chickpeas (ceci); lentils (lenticchie); red and cream borlotti; and large black-eyed beans (toscanelli). Dried beans can be kept for weeks or even months if stored in a cool, dry place.

OLIVE OIL In Italy, olive oil is the lubricant of life, used for dressing salads, vegetables, cold fish, and more; for preserving mushrooms, anchovies, tuna and almost anything else worth saving for later; for deep-frying, shallow-frying, sauteing; as shortening for breads and pastries; even sometimes as medicine. Olive trees flourish in the sunny south, but some connoisseurs think that top Tuscan oils, peppery and full flavored, are the best of all. Wherever it is produced, extra-virgin olive oil, which comes from the first pressing of the olives, is known to be superior in taste.

OLIVES Italian olives, which grow from the northern shores of Lake Garda to the southern tip of Sicily, are among the world’s finest. They come in both green and black varieties and are usually so good they are eaten by themselves.

PARMIGIANO-REGGIANO The ultimate Italian cheese is used throughout the peninsula and is essential to a host of classic dishes, from Liguria’s pesto to Campania’s eggplant parmigiano; it’s also prized as Italy’s finest table cheese, eaten in small firm chunks. Named for the cities of Parma and Reggio nell’Emilia, it is made only in a precisely defined area. Made from cow’s milk, parmigiano-reggiano has a nutty, earthy flavor and a grain that feels like cornmeal in the mouth. When young (it must be aged at least a year), it is perfect for sauces; as it ages it is best eaten alone. Use the rind in soups and sauces to add flavor.

PASTA In its purest form, pasta—literally, “paste”—is simply flour mixed with water or eggs (and occasionally both), then cut or shaped into various forms, and usually dried. In its earliest days pasta was probably made fresh to order, but by the 13th century dried pasta became more commonplace due to its long shelf life. It wasn’t until the 20th century that pasta became a staple of Italian cooking, but today, mention Italian cuisine and it’s usually the first thing comes to mind. Choose pasta imported from Italy, especially products made from semolina flour. Egg pasta is best made from scratch, though you can buy it dried in a pinch.

PROSCIUTTO What we (and Italians themselves) commonly call prosciutto is actually proscuitto crudo, raw (but cured) ham; the most famous bears the appellation “di Parma,” meaning that, while the pigs might be raised in different regions, the meat must be cured in the province of Parma. At its best, proscuitto di Parma is rosy-hued and silky in texture, with a spicy aroma and slightly salty, earthy-sweet flavor. Whether eaten by itself or used judiciously in cooking, it is one of Italy’s great culinary treats.

RICE Italian cooking makes excellent use of the high-quality, short, plump grains cultivated in Lombardy, Piedmont and Veneto, which are categorized into four groups based on grain size: comune, semifino, fino, and superfino. Carnaroli, classified as superfino, is the preferred variety for making risotto, due to its high starch content. Look for ai pestelli on the package, which means the grains were hulled with a mechanical mortar and pestle that leaves the rice covered with a powdery starch—important in making the creamy texture one finds in risotto. Never wash the rice before cooking, as this would remove the needed starch from the grain.

SEMOLINA FLOUR Produced from durum wheat, this pale yellow flour, which is available either coarsely or finely ground, is used primarily for pasta due to its high content of protein and gluten, but is sometimes used for gnocchi and assorted breads and pastries.

WINE AND VINEGAR Wine is produced in every region of Italy, and though most of it is everyday stuff, drunk with no ceremony, there are a few treasures: Piedmont’s complex barolos and barbarescos; sensuous, earthy Tuscan chiantis and brunellos; the fragrant, mineraly whites of Friuli and the Veneto; and the sun-drenched sweet wines made in Sicily. Where there is wine, of course, there is vinegar—which is not wine gone bad but rather wine taken in a different direction, acetified and honed to sharpness. Italians favor vinegar as a medium of preservation, especially for cooked vegetables and fish, and also as a basis for dressing salads. True balsamic vinegar can be pricey, so use the inexpensive stuff for salad dressings and cooking and save the 25-year-old bottle to drizzle on special dishes.