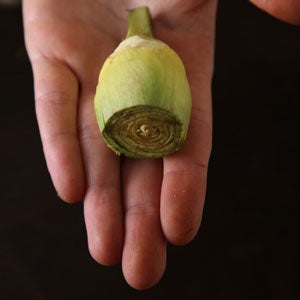 Unlike European baby artichokes, which are harvested young, the vegetables that go by that name in America are simply smaller artichokes harvested at the same time and from the same plants as bigger ones. Clustered low on the stalk, shaded by the jumbo bulbs at the crown of the plant, these “baby” artichokes grow into mature, if petite, bulbs that remain relatively tender. Larger artichokes, such as globes, have not only woody outer leaves but also a fibrous choke that must be removed and discarded, while baby artichokes contain an edible choke (except those harvested very young, which have no choke at all). Both the American and the European baby versions are perfect for simmering, as in our recipes for Braised Artichokes and for Fettuccine With Artichokes And Chicken, or for sauteing, as in the Skirt Steak With Artichoke and Potato Hash recipe. They’re also great in stir-fries and used raw in salads. And as this step-by-step guide shows, these diminutive delights are exceptionally easy to trim and prepare for cooking.

1. Using a serrated-blade knife, cut off the spiky top third of a baby artichoke and discard the trimmings.

2. Pull back each dark outer leaf and snap it off at the base until you reach the tender, pale green inner leaves.

3. Use a vegetable peeler to remove the tough outer layers around the stem until you reach the pale layer underneath.

4. Leave the stem attached. With a paring knife, cut off the tough bottom 1⁄4″ of the stem.

5. Use the paring knife to trim any remaining dark green or tough parts around the edge and underside of the artichoke and stem until it is smooth and uniformly pale in color.

6. The cleaned baby artichoke with its edible choke intact can be rubbed with the cut side of a lemon half and used immediately or stored, refrigerated, for up to two days in four cups of water mixed with the juice of two lemons, which will prevent browning.