How to Get Corn Off the Cob 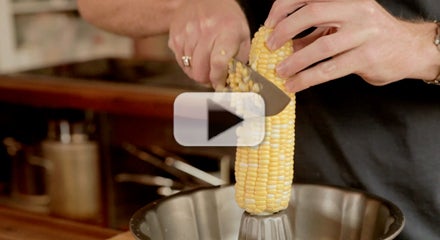 Fresh corn is one of summer’s greatest pleasures, but getting it off the cob can be a wobbly, messy endeavor. To keep kernels from flying everywhere, associate food editor Ben Mims shows us a trick using a bundt pan to keep the cob steady and collect all the kernels in one place.

Place the cob on the center of the bundt pan. Slice downward along the sides of the cob to remove the kernels, then scrape the back of the knife along the cob to release its juices.