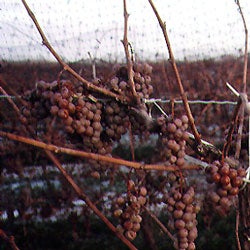 It isn’t hard to imagine the gamut of emotions that must have flowed through the nameless German vintner who, some 200 years ago, discovered that his precious crop of riesling grapes had frozen solid on the vine—incredulity, anger, frustration, and finally resignation, as he pressed the fruit anyway, despite their icy exteriors, hoping for … what? And what he got was the world’s first ice wine.

According to Canadian wine writer Tony Aspler, this happy accident took place in 1794 in the duchy of Franconia. Since that time, German ice wine (Eiswein) has become both famous and famously expensive. But Germany isn’t the only place ice wine is made these days. Some of the best of it, in fact, comes from Canada (a country frankly not famous for its wines), and specifically from Ontario’s Niagara Peninsula. Even the French agree: One of the best of the genre, Inniskillin 1989 Vidal Ice Wine (vidal is a French-American hybrid grape that does well in northerly climes) was awarded a Grand Prix d’Honneur at a 1991 Vinexpo competition in Bordeaux.

The secret to the luxurious sweetness and complexity of ice wine lies in the calculated gamble of leaving the grapes on the vine until they are well frozen by at least three consecutive days of at least -7° C (19° F) weather. At that time, whatever shriveled, brown fruit has escaped the voracious appetites of the local birds is harvested, and then crushed while still frozen. The incredibly concentrated juice grudgingly given up by these icy nuggets—one-fifth or less of the quantity pressed from normal grapes—is then clarified and slowly fermented until it turns into a golden elixir.

The resulting wine is nectarous, and wonderfully intense. It is a delicacy to sip and savor in small amounts—which is fortunate because, in Ontario as in Germany, it remains a rarity. A number of wineries in the Niagara area make ice wine—besides Inniskillin, the top producers include Hillebrand Estates, Konzelmann Winery, Reif Estate Winery, and Vineland Estates—but even at premium prices, demand has been so great that orders often remain unfilled.