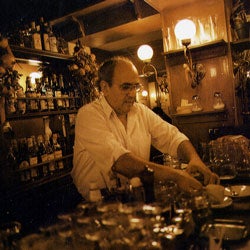 In every wine-producing corner of the Mediterranean, spirits are distilled from wine grape residuals—seeds, pits, skins, and the like. The French call such liquors marc; the Italians call them grappa. The Greek equivalent of grappa is tsipouro. Many Mediterranean lands also produce anise-flavored alcohols—arak in Lebanon, pastis in France, anis (dry or sweet) in Spain, sambuca (sweet, and also flavored with elderberry) in Italy, and so on. Ouzo, virtually the national tipple of Greece, began as something of a combination of the two, with a twist.

According to the early 20th-century philologist Achilles Tzartzanos—Diane Kochilas recounts the story in The Food and Wine of Greece (St. Martin’s Press)—both the product and its name were born sometime between 1878 and 1881 in the town of Tirnavos, in Thessaly, in northeastern Greece. Tirnavos was noted for two things: its fiery liquors and the quality of its silks. According to Tzartzanos, three local aficionados of strong drink decided to try to improve the town’s best raki, an anise-scented grape-residual spirit distilled three times for smoothness. To this raki, they added mastic, an incenselike gum from Chios (and the heart of another clear Greek liquor, mastiha), and various other flavorings. The result, declared one of their number (who happened to be a textile merchant), was “as good as USO Massalias”—the name given to silk bound for market in Marseille, the optimum quality. “USO” became “ouzo.”

It might be noted in passing, incidentally, that this sounds suspiciously like folk etymology—and that Tzartzanos was a resident of Tirnavos, so may have had a vested interest in promoting the town as ouzo’s birthplace. But whatever the origins of ouzo, there is no question that it quickly gained popularity throughout Greece. Today, it is not necessarily made with grape-residual spirits, and the law allows some latitude regarding flavorings (though anise is essential). Because of improved distillation methods, it is no longer necessary to distill the spirits three times, either—though several brands, are distilled twice.

Though ouzo has always been consumed with food, it may at first have been swallowed straight, undiluted. Some native fans of the drink might still take it straight, or with water on the side—but the favored way to drink ouzo today is with a splash of water, which turns it cloudy.

At least one century-old custom celebrating the spirit survives in Tirnavos. It occurs on Shrove Monday when the townspeople drink ouzo from giant, gaudily painted phallic vessels—a paean to the ancient fertility gods. Surprisingly, this practice is apparently sanctioned by the Greek Orthodox church.