The Best Sparkling Wine to Buy This Season 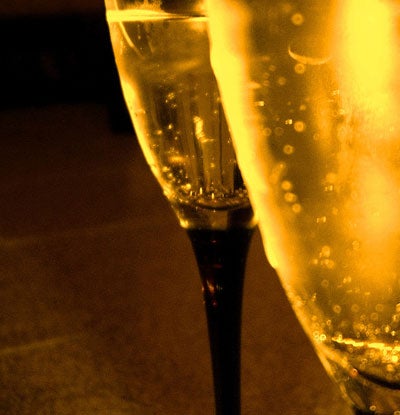 Let’s be honest. There’s only one thing that matters when it comes to wine during the holidays: how can you buy fabulous stuff and have memorable, sensual, worthwhile experiences with your guests without having to take in roommates and switch to a ramen noodle soup diet come January?

I could just give you the names of some great cheap wines to buy, but the premise of my new book, Drink This: Wine Made Simple (Ballantine, 2009), is that knowledge is power, and I’d rather teach you to fish than just give you a fish, so to speak. So, here’s the news: European sparkling wine is almost always the most reliable inexpensive wine in your local shop. Why? Because sparkling wine and regular, vintage-dated wine are made differently.

French champagne makers, however, wrote themselves a better set of rules. They release vintage-dated champagne only in the very best years. For the rest, they keep a tank of the tart stuff and another tank of the sweet stuff, and they sell the watery stuff on the bulk market, blend the good, jettison the bad—and voila! That’s how champagne vintners make a consistent product.

Here’s an easy way for food people to think of it. Regular vintage wine is “ingredient driven.” That is, it requires perfect ingredients, like that one beautiful summer heirloom tomato shining on a plate. Bubbly wine is more “chef driven”: it’s not exactly cooked, but different varieties of sparkling wine are combined into one bottle. That’s why, almost without exception, sparkling wine is of uniformly higher quality than regular still wine. (The hideous exception is cheap American bubbly, usually made from the worst available bulk-market juice and added chemicals like citric acid to give it acidity and actual sugar.)

Champagne is the sparkling wine of the Champagne region and is made from its native grape, chardonnay. But lots of other European regions have their own sparkling white wines made from their own native grapes that are likewise corrected by means of highly skilled winemaking. Americans don’t know what they are, and so they’re underpriced. Here are the ones to look out for.

Cremant is a French way of saying bubbly (the French actually have words for bubbly in the same way that Eskimos are supposed to have different words for snow). More important, it’s your secret handshake to get you a whole bunch of wonderful French wines that are a bit more gently carbonated than champagne. All of them start with the word Cremant (pronounced CRAY-mawn) and end with a place-name. For example, keep your eye out for Cremant de Loire, Cremant de Limoux, Cremant de Bourgogne, Cremant d’Alsace, Cremant de Jura, and so on.

Typically, Cremant sparkling wines start at around $12 or $13 a bottle and top out at around $30, with most clustering in the all-important $18-$25 region. Mostly they are white, but lately there’s been a bit of enthusiasm for roses. All in all, though, they’re uniformly excellent. Some are a little sweeter than the champagne you’re used to, but some are not. They’re great stand-alone wines, and they’re perfect with cheese, crackers, fish, and poultry. Generally, they’re some of the cheapest good wine in any local store. They’re usually imported in such small batches that you’ll never find the same bottle twice in, say, New York City, never mind the same bottle in both Berkeley and Boston, so there’s not any point in naming exact names. But if you want to spend less this holiday season and drink well, take a gamble on the next Cremant de Whatever that you see. It’s likely to be pretty great.

Cava is sparkling wine from Spain. The only difference between French bubbly and Spanish bubbly is a couple of hundred miles and a much drier climate, which requires that the Spanish use totally different grapes. Typically, cava starts at around $7 a bottle and tops out at $30; basically, any cava under $10 is clean, crisp, and somewhere between plain and innocuous (much better than American wines under $10, which will be highly acidic, weirdly sweet, and headache inducing.)

Cristalino makes a reliable cava: it’s sharp, crisp, and inexpensive, usually $8 for white bubbly and $9 for the very slightly fruit-scented rose. Pay over $15 for cava and you’ll start getting into more interesting efforts, with wines offering various notes of biscuits, mushrooms, and so on. If your local shop offers something that looks as if it came straight from a Renaissance festival, with a strange metal grape crest and an elaborate metal coaster glued to the bottom of the bottle, it might hold something pretty awesome, like Segura Viudas Cava Brut Reserva Heredad, an intriguing wine with biscuit notes that goes splendidly with cheese.

I know I’ve been slagging cheap American bubbly. Part of the reason is that crude domestic sparkling wines made by producers like Cook’s, Andre, Tott’s, Korbel, and even Chateau Ste. Michelle are so terrible that most wine-buying folk take a pass on truly amazing American sparklers.

Mirabelle, from Schramsberg, is one that shouldn’t be ignored. It has a cheesy name (what, Tinkerbell was taken?), but it’s just a charming wine. It’s usually priced between $17 and $20 a bottle and offers a beautifully restrained and balanced body and the prettiest, most subtle nose of flowers and biscuits. I love it. And I tell you—this Mirabelle has to be one of the most undervalued wines on Earth.

Schramsberg’s higher-level sparking wines are all great—J. Schram, at around $80, is worth a splurge. My other favorite American sparklers are the Roederer Estate wines, from its basic Brut ($18.25) to its L’Ermitage ($43.99); the Mumm Napa wines (its Cuvee M, at $20, is underrated); and the Gloria Ferrer sparklers, especially its Blanc de Noirs ($17).

Dara Moskowitz Grumdahl’s new book, Drink This: Wine Made Simple, is available in bookstores. You can also follow her at deardara.com.