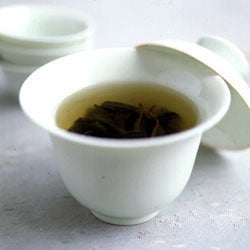 In Japan, the enjoyment of a certain kind of tea has been elaborated over the centuries into a ritualized procedure popularly called the Japanese tea ceremony. Every aspect of the preparation and consumption process is performed according to a set of rules—the preparation of the water, the transfer of a brilliant green powdered tea to the tea bowl, the whisking of the tea into a thick, foaming brew, the way in which cups are presented, drained, returned. A specific style of architecture even developed for the elegantly rustic tea rooms or teahouses in which the ceremony is usually performed.

There is a formalized way of preparing tea in China, too, using semifermented teas from Fujian—though it’s practiced most elaborately in Taiwan, where tea drinkers have more time and money to devote to tea. Called gong-fu cha, it is not a ceremony as such, but rather a step-by-step method of tea preparation.