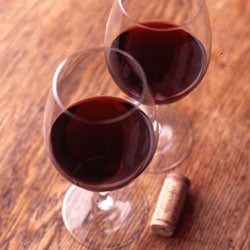 Legends have attached to what has been called the black wine of Cahors—a handsome walled town on the Lot River in the southwestern French region of Quercy—for two thousand years. One tale claims that tsarist plotters poisoned Rasputin, the mad monk, by doping a glass of cahors he was drinking—the wine so formidable it could conceal the taste of cyanide. Now, there’s a catchy advertising slogan for you.

Cahors these days isn’t anywhere near that harsh. Since the 1970s, the vignerons of the region, which lies roughly 125 miles southeast of Bordeaux and 390 miles south of Paris, have tinkered with the character of the wine, smoothing its hard edges. By vinifying the wine in a friendlier style, local winemakers hope to turn cahors into the next cotes-du-rhone—which was a vin ordinaire until about 25 years ago and then jumped in status to become something approaching fine wine.

The Romans introduced winemaking to Cahors, and Caesar reportedly exported its black wine to Rome. In medieval times, the reputation of cahors spread across Europe. Its biggest promoter was Pope John XXII, the former bishop of Cahors, who became the second Avignon pope in the 14th-century schism with the Vatican. Pope John saw to it that cahors became the communion wine of the Avignon church—and may have been responsible for persuading the Russian Orthodox church to adopt it as well, perhaps as a way of solidifying an alliance against Rome. A wine called caorskoie, made from vines descended from French cuttings, is still found in the Crimea—lending plausibility to that legend about Rasputin.

Cahors is a product of the dry limestone soils that predominate on the Causse plateau. The limestone does a service to grapevines by encouraging the retention of heat and moisture. (The principal grape variety is malbec, with some tannat—which also produces the sturdy wines of Madiran—plus a strictly local variety called jurançon noir and an ever-increasing measure of merlot.) The result is rich, dark fruit that yields ruby-colored wine. Traditionally, some boiled-down must (unfermented or partially fermented grape juice) was added to deepen the color and enrich the wine still more.

In the Middle Ages, when the wines of Bordeaux were a literally paler version of their current selves, cahors was often blended in to lend them body and color. By the 18th century, Bordeaux’s fame had eclipsed that of Cahors. Then, around 1880, phylloxera, the plague that all but destroyed the wine industry in France, wiped out Cahors’s vineyards. The rebuilding of the region’s wine industry began after World War II and accelerated in the 1960s—later greatly assisted by the political connections of the man who was then the town doctor, Bernard Pons. Georges Pompidou, who lived upriver at Cajarc, became president of France in 1969; two years later, he made his friend Pons his minister of agriculture. The same year, the doctor lobbied successfully to have cahors granted an appellation controllee—which gave it new visibility and respectability in the world wine market.

It says much about the strength of family tradition in the region that the aristocracy among Cahors winemakers includes the same names that have been associated with the wine for generations: Resses of Chateau La Caminade, Jouffreau of Chateau du Cayrou, Rigal of St-Didier, Monpezat of Chateau de Monpezat, Baldes of Chateau Triguedina. The particuliers of Cahors—proprietors of family-owned chateaux—work their own fields. At harvest time, they are out among the migrant pickers from Portugal and Morocco. To shake hands with Jean Baldes of Chateau Triguedina in Puy-l’Éveque—who died in 1996—for example, was to feel the rough palm of a farmer. But Baldes, who was stubborn and ribald and smart, was a farmer who made good—and his success made him, like a number of other particuliers, affluent enough to be able to afford heavy capital investments in the latest equipment. Chateau Triguedina, dating from 1830, is built in the classic Quercy style of limestone and straight lines. Under it, the cool ground floor is used as a wine cellar. Yet behind the house is a modern chai, a model of winemaking technology: huge, gleaming fermentation tanks, computerized climate controls, and rows of oak barrels, maturing wine that no one will drink for at least three years.

At the other end of the industry in Cahors are the small growers, often situated close to the banks of the Lot and hence called les pieds a l’eau, or feet in the water. They grow wine grapes as a low-input crop with a ready market and a price all but guaranteed—in this case by the local cooperative, Les Cotes d’Olt. The co-op was founded in 1947, at the dawn of the cahors revival. Its sprawling production facility in Parnac is a veritable factory, whose young wine is sold for $2 per liter (in the customer’s own container) in the great Saturday market of Cahors. Not surprisingly, the particuliers blame Les Cotes d’Olt for perpetuating the image of cahors as a rough country wine.

The friction between the particuliers and the growers who sell to the co-op manifests itself, to some extent, as a class conflict. For example, a requirement for membership in Les Seigneurs du Cahors, an association formed to promote the image of cahors, is the steep admission price of 30,000 francs, almost $6,000. There are also plenty of family rivalries and long-standing grudges in the region. But that, jokes Jean-François Baldes, Jean’s son, “is a tradition here. In Bordeaux, there’s a different way of thinking, because the chateaux are owned by big companies. Here in the Lot, 90 percent of the vineyards still belong to families.”

The young Baldes has firsthand experience of ancient family custom. Under the rule of primogeniture, Jean-François and his two sisters were excluded from all but shareholder roles at Chateau Triguedina, in favor of their older brother, Jean-Luc. To keep his roots in the wine trade, Jean-François joined two Americans, Stephen and Sherry Schechter, in the creation of a new winery, Chateau de Flore, on a hillside overlooking Triguedina. Alas for him, though the property’s wines sold well locally, they attracted little interest in the export market—and in 1995, the Schechters sold de Flore to the Baldes family. Primogeniture again gave Jean-Luc ownership of the property. Jean-François now works at the drug-and-alcohol rehabilitation clinic in Cahors, and helps out part-time at Triguedina.

If the feuds and family melodramas of the region have at times suggested scenes from Jean de Florette, at least everyone used to know who everyone else was. In the 1980s, however, Quercy was discovered by the beau monde—the “beautiful people” of Paris and beyond, attracted by the region’s pretty villages and relative remoteness. What particularly rankles some of the old families of Cahors is that several of these posh newcomers have set themselves up in the wine trade. Alain-Dominique Perrin, chairman of Cartier International, for instance, bought the 148-acre Chateau Lagrezette estate in 1980, and later founded Les Seigneurs du Cahors. In 1987, before going into partnership with Jean-François Baldes, the aforementioned Stephen and Sherry Schechter bought Chateau Pech de Jammes from Pons. (Pons has pursued his political career, holding a variety of governmental positions; he is now said to be a possible candidate for the mayoralty of Paris.) Even royalty has come to Cahors: Queen Margrethe II of Denmark married Henri de Monpezat (now known as Prince Henrik) in 1975, and though it is de Monpezat’s brother Jean-Baptiste who runs the family wine business, Margrethe and Henri visit their Chateau de Caix estate each August.

Stephen Schechter is a managing director of the New York-based Schroder Wertheim Company investment firm, where he came into a windfall in 1986 through a corporate merger. The Schechters had been serious wine enthusiasts since the early 1970s, and with their newfound wealth, they decided to go shopping for a chateau. After looking without success in Bordeaux, they heard about Pech de Jammes. “Neither of us knew anything about Cahors,” recalls Sherry Schechter. “I told Stephen that if he insisted on going to see the place, I wouldn’t even talk to him. I slept the whole way in the car.” The Schechters now say it was love at first sight. The chateau dates from the late 18th century. Pons had installed a swimming pool so large it was marked on some local maps of the area. At the edge of the vineyard stand several truffle oaks, where once a year local truffle hunters come with their dogs to sniff out the prized fungus. Surrounding the house, on the slopes below, are 25 acres of vineyards.

The estate produced a modestly successful wine under Pons, but the Schechters—who have invested more than $1 million in the estate—made it clear from the beginning that they had larger ambitions for their Pech de Jammes. Among other things, they wanted to raise the percentage of merlot grapes in the blend, to soften its character. This got them off on the wrong foot with traditionalists like Georges Vigouroux, their vineyard manager—who is also the proprietor of two Cahors estates of his own, Chateau de Haute-Serre and Chateau de Mercues, and was a pioneer of the region’s regneration. (Vigouroux has obviously come around, as he continues to manage the property.)

Along with Alain-Dominique Perrin, the Schechters have emerged as the most visible spokespersons for Cahors. They promote the wine enthusiastically to retailers, chat up wine writers, and link the success of their own wines to that of the appellation generally. Tooling around the Lot Valley in their dollar-green Mercedes station wagon, they have brought an American-style aggressiveness to the Lot that Stephen Schechter concedes is not always appreciated by his fellow growers. It didn’t help when a London wine writer referred to Schechter several years ago as “Mr. Cahors”. “Basically,” says Schechter, “the Cahors vignerons perceive their competition as their neighbors down the road—not the wineries of Chile or Australia or New York State. They don’t understand that the more publicity I can get for Cahors, the better it is for the region.”