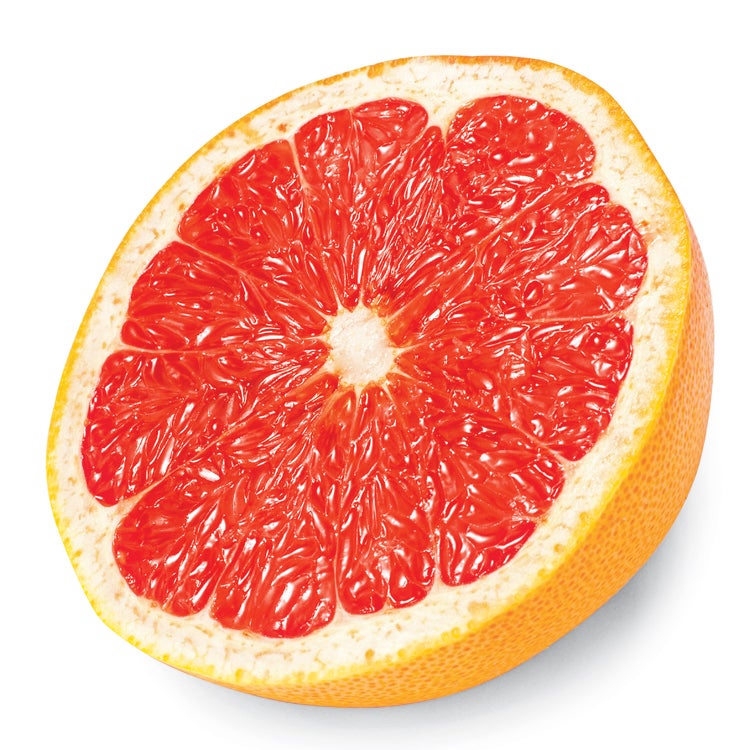 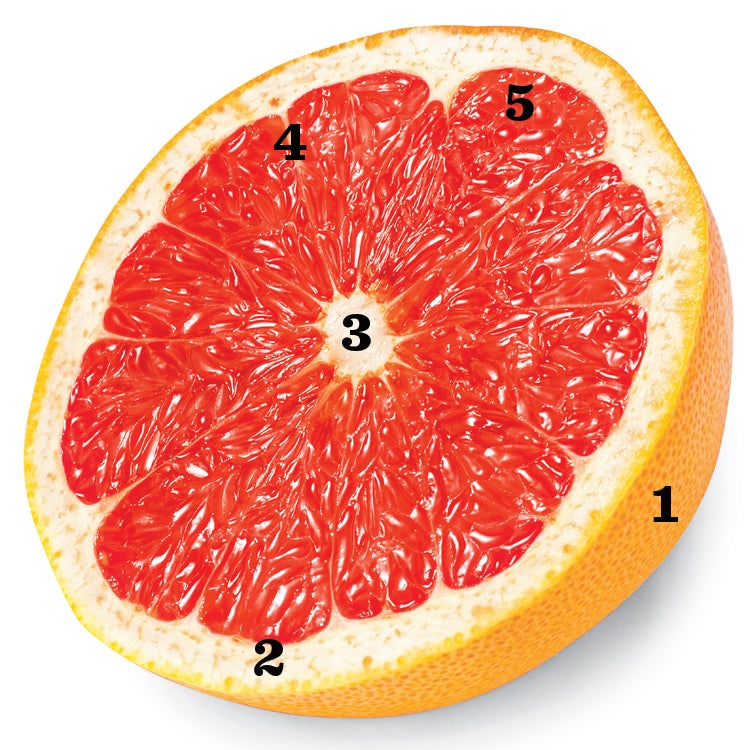 Citrus paradisi, or grapefruit, is structured similarly to the majority of its citrus cousins. On its outside is a pigmented skin that scientists refer to as the flavedo 1. The flavedo is covered in tiny glands filled with essential oils. The oils contain many of the compounds that give grapefruit its signature aroma, released when cooks, who refer to the skin as zest, grate it, adding zip to dishes. Of grapefruit oil’s 200-plus volatile compounds, nearly 40 contribute to the fruit’s scent and flavor. Two of these—spicy nootkatone and the sulfur compound 1-p-menthene-8-thiol—are unique to grapefruit. Beneath this outer skin is the airy white section of the peel called the pith or the albedo 2. The bitter compound naringin is concentrated here. Happily, this compound is water-soluble, so its bitterness softens when the albedo is boiled, as it is for candied grapefruit peel. The pith is also high in pectin, which acts as a natural thickener in grapefruit marmalades. Radiating out toward the albedo like spokes on a wheel from the grapefruit’s white central axis, called the columella 3, are the tough walls of the fruit’s membrane 4. Vascular tissue that feeds and waters the cells of the fruit, the membrane separates the flesh of the citrus into as many as 30 wedge-shape segments. Within each segment is grapefruit’s pay dirt: hundreds of teardrop-shape vesicles 5 containing the juice. Filled with compounds called esters that deliver a fruity, tropical flavor, the sweet-tart juice is also deliciously high in sugar and acid, both of which are concentrated at the more intensely flavored blossom end of the citrus. The juice contains the majority of the fruit’s pigments, so it’s also to thank for grapefruit flesh’s glorious colors, which range from pale yellow to rose-petal pink and deep crimson.