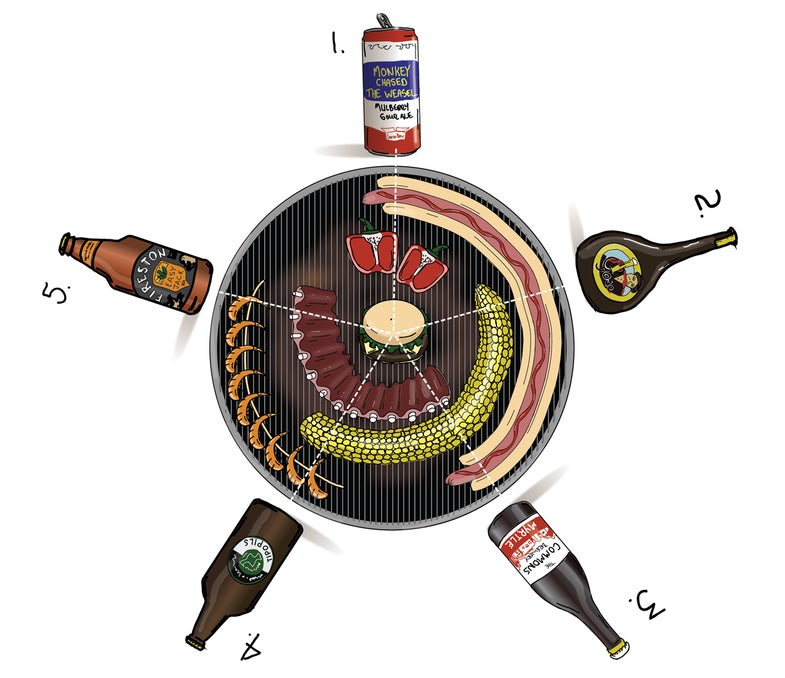 The advent of summer cues a certain approach in my beer-drinking habits—I want something refreshing and thirst-quenching to battle the heat, light enough to enjoy all afternoon, and with enough flavor to stand up to the spicy, savory, and smoky foods that I’ll be serving at my barbecues. Here, five different beers that hit this sweet spot:

1. Carton Monkey Chased the Weasel Berliner Weisse (3.9% abv)
In Berlin, sweet fruit syrup is often dispensed into steins of the local wheat beer, called Berliner Weisse, to counterbalance the ale’s inherent tartness. In New Jersey, Carton Brewing blends fruit juice right into this sour beer for its own take on the style. Made with mulberries from a tree shading the brewery’s parking lot, this bracing Berliner Weisse strikes a sweet-tart balance that’s just right for relish-topped hot dogs or cool summer salads. And at just 3.9% alcohol by volume, it’s a gulpable beer to swig all day long. ($12 for four 16-oz. cans)

2. Leipziger Gose (4.5% abv)
Like Berliner Weisse, gose is a light and refreshing, once-obscure German-style sour wheat ale that’s recently been reinterpreted and popularized the US. Some of the most popular goses come from American craft brewers like Westbrook, Off Color, and Stillwater, but one of the originals is Leipziger Gose from the city of Leipzig, Germany, about 100 miles southeast of Goslar, where the style originated several centuries ago. Tart and lemony with a crystal clear, bone-dry finish, it’s a no-brainer for pairing with savory grilled foods, especially lighter fare like charred zucchini, creamy potato salad, and light-colored sausages with pickles and sauerkraut (think weisswursts, knockwursts, even hot dogs). Bonus points for showing up with this ridiculously shaped longneck at your next cookout. ($20 for a 750-ml. bottle)

3. The Commons Myrtle Saison (5.8% abv)
Saisons are notoriously indiscriminate beers, coupling with and adding pleasure to just about every food they’re paired against. The Commons Brewery from Portland, Oregon, creates an invigorating version made especially tart and acidic from Lactobacillus fermentation. The bacteria create enormous citrus aromas akin to lemonade, mimosas, and grapefruit soda while the prickly carbonation tingles like fireworks in your mouth. An addition of local Meridian hops adds a dry but pleasant bitterness. Drink this with grilled corn, blistered hot dogs, marinated flank steak, or just about anything else you can find to throw on the grill. ($15 for a 750-ml. bottle)

4. Birrificio Italiano Tipopils Pilsner (5% abv)
Perhaps no backyard pairing is more patriotic than a Budweiser and a hamburger. But while I occasionally knock back an ice-cold Bud after a long bike ride, the attenuated flavor and thin mouthfeel make it a beer that doesn’t stand up particularly well to food. Try one of my favorite pilsners instead, Birrificio Italiano’s Tipolis from northern Italy. Its sturdy, grassy flavor and fresh hop-forward aroma makes it well suited for a juicy burger or a stack of sticky ribs, and its crisp mouthfeel makes it just as thirst-quenching as any American lager. ($10 for a 500-ml. bottle)

5. Firestone Walker Easy Jack Session IPA (4.5%)
For hopheads who love the biting bitterness of IPA’s but can’t stomach the elevated alcohol levels when drinking more than one or two, the recent advent of the “sessionable” IPA is a godsend; their low ABV (most clock in at under 5%) means that you can drink a few without fear of tumbling head-first into the pool. California’s Firestone Walker dry-hops their version, Easy Jack, with American Mosaic hops for a citrusy clean taste that’s easy drinking and supremely refreshing. Sweet aromas and a peppery finish mean that it’s good with grilled chicken slathered with barbecue sauce and burgers topped with ripe tomatoes and melted cheese. ($10 for six 12-oz. bottles)