Your Pantry Guide to the New Essential Baking Spices

How to expand your dessert potential in ten easy steps 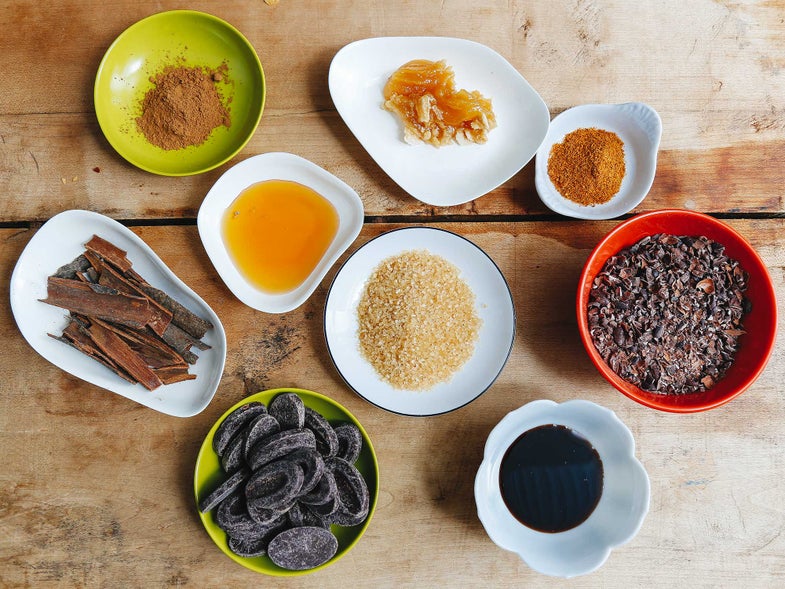 Whether you only bake for the holidays or regularly find yourself up to your elbows in buttercream because it’s Tuesday, your spice cabinet deserves to be an essential part of your dessert arsenal. Obsessing about the integrity of our butter and flour is commonplace these days; why should we give our cinnamon and nutmeg the short end of the breadstick? Great spices, even if only used in small amounts, can mean the difference between good pastries and breathtaking ones, and a well-stocked cabinet also expands your pastry potential like nothing else.

So here is a ten-point checklist to taking your sweet spice rack more seriously. I’m calling these New Essentials not because they’re new—spices are after all one of the most ancient things we eat—but because they’re probably not the flavors you rely on for your baking. I’m also playing a little loose with the term “spice” here—chocolate, honey, and other accents make appearances—but those are tactical moves meant to further expand the way you’re thinking about your dessert.

Bear with me. The world-historical thrust of baking modernity compels you.

It’s an exaggeration to say spice genius Lior Lev Sercarz’s smoked cinnamon has changed the way I bake, but only a slight one. First up: if you haven’t had quality cinnamon yet, made from real Cinnamomum verum, you’re missing out on a gentle fragrance and sweet citrus vibe that’s totally different from the more pungent fiery stuff in most spice jars. Then comes the smoke: gentle, not overbearing, letting the cinnamon’s natural fragrance shine through, but that extra edge makes spice cakes, ice cream, and baked fruit desserts sing.

When a recipe calls for nutmeg, I usually substitute mace—the bright red webby stuff that surrounds the actual nutmeg nut. It tastes like nutmeg but so much more: lighter, brighter, with notes of citrus and a generally sunnier disposition with less of nutmeg’s feisty pungency. A subtle difference, but a pleasantly unexpected one that I adore with lemon zest in the crumble layer for my apple crisp, or in the batter for honey cake and pancakes. Great pancakes.

Are you adding black pepper to your dessert yet? Do it, in small doses, especially where vanilla or mango make appearances. But you already have black pepper. What you probably don’t have is grains of paradise, a pepper lookalike that for a while in Middle Ages was prized even more than the black stuff. It’s sweeter, less peppery and turpentine-y, with notes of wood, cardamom, and orange, so it plays nicely in desserts that need a savory touch with their spice. Add it to gingerbread, that apple crisp you’re fortifying with mace, mango sorbet, and shortbread cookies.

Coriander gets plenty of love in savory recipes, but I’m all about using it in sweet applications. Depending on the region your coriander comes from (the spice is cultivated from Mexico to Thailand), the dominant flavors can range from citrus to balsam, but regardless of source, coriander adds great complexity to coconut cake, everything with lime, and tropical desserts like pineapple upside down cake. Mix it up with lime zest and sea salt and you have a killer topping for caramels or butterscotch cookies.

These crunchy little guys are great ways to add deep, roasted chocolate flavor to something without any sweetness; their gentle tannins actually help reduce the overall sweetness of a dessert. Most people just use them as doses of nutty textural crunch, but I really like treating them as a spice: toast and grind them and you have a powder that’s like a cross between cocoa and coffee, but more flavorful than either. And if you want to make the deepest, darkest, most chocolatey ice cream or pudding ever, steep some cacao nibs in your dairy for a couple hours first.

This alternative sweetener isn’t a spice, but it’s an essential part of the way I bake now, the kind of thing that separates serious pastry people from mere mortals (but is actually really simple to use). Glucose is just sugar, available in syrup form or powdered (e.g. “atomized”), but it’s 20 percent less sweet than sucrose (a.k.a. table sugar). That means you can bake tender cakes and cookies that taste less sweet, allowing your meadow butter and whole grain flour to shine through with no less in quality. Glucose does alter the texture of baked goods and custards like ice cream, but generally in ways that we want: cookies are more chewy, ice cream is less icy, and cake stays moist for longer.

Sugar in the Raw from Amazon Matt Taylor-Gross

Also on the sugar front: throw away your brown sugar and use this stuff instead. Okay, don’t throw that brown sugar away, but rely on it a lot less than you do. Brown sugar is really just refined sugar mixed with molasses, which explains why it tastes so…molasses-y. It’s also pretty one-note, an expected, familiar flavor that does little to raise eyebrows. Turbinado sugar, on the other hand, is cane juice that’s dehydrated and minimally processed, which means it retains more of its natural impurities, i.e. complex flavors. It tastes more mellow (and less acidic) than brown sugar, but also more interesting, enough so that it’s my go-to sugar for adding a semi-caramelized verve to desserts.

Because turbinado’s crystal size, moisture content, and acidity aren’t the same as brown sugar, you can’t use them as direct substitutes. It also needs a base with some moisture to dissolve those coarse crystals, which means it’s not ideal for creaming with butter for cookies or cakes. But if your dessert has some moisture going on, like the fruit filling of a pie, turbinado shines.

A serious pastry friend of mine was the first to suggest to me that we should think of honey as a spice, not just a sweetener. She picked up the idea from the late, great Gina DePalma, the pastry chef and author behind one of the most definitive Italian dessert cookbooks ever written. And if it’s good enough for Gina, it’s good enough for me. Honey packs a lot of flavor into small doses, which means just a dab adds wonderful flavor to just about anything.

I’m currently sitting on half a dozen honeys from around the world, all for different purposes, but if you twisted my arm I’d narrow it down to three: light-bodied acacia, for a gentle vibe a lot like golden syrup and perfect for drizzling over fruit tarts; orange blossom, as a moderately dark but fragrant option delicious in walnut cookies (you probably have this one); and buckwheat, a burly, almost brutish honey with a savory edge that adds more depth to dessert than anything in your kitchen.

Balsamic is so 1990s; PX sherry vinegar is so 2000s. Both are good for adding acidity with a dose of syrupy sweetness on top of billowy meringues and piles of pudding, but they pale in comparison to the fruity twang of Turkish pomegranate molasses, which is simply pomegranate juice reduced until its sugars gently caramelize, but not so much that it loses its juicy freshness and almost floral, raspberry seed aroma. Drizzle it on, well, everything, but especially ice cream.

Okay, okay, of all the things on here that aren’t spices, these are the most not-spices, but few things improve the quality of one’s baking than the quality of one’s baking chocolate. That starts with chocolate chips, which are fortified with stabilizers that help them keep their shape while baking, which is fine if you really want that picture-perfect look, but I’d rather have a deeper chocolate flavor with gooey, melty chocolate.

So throw out your chips and replace them with these feves—oval discs that make for perfect fat chocolate slabs in your cookies and brownies. There’s a reason pastry chefs are so loyal to Valrhona’s dark chocolate—it’s reliably excellent, smooth-melting, and plays well with just about everything. Including everything else on this list.