Why People in Havana Are so Crazy for Their Coffee 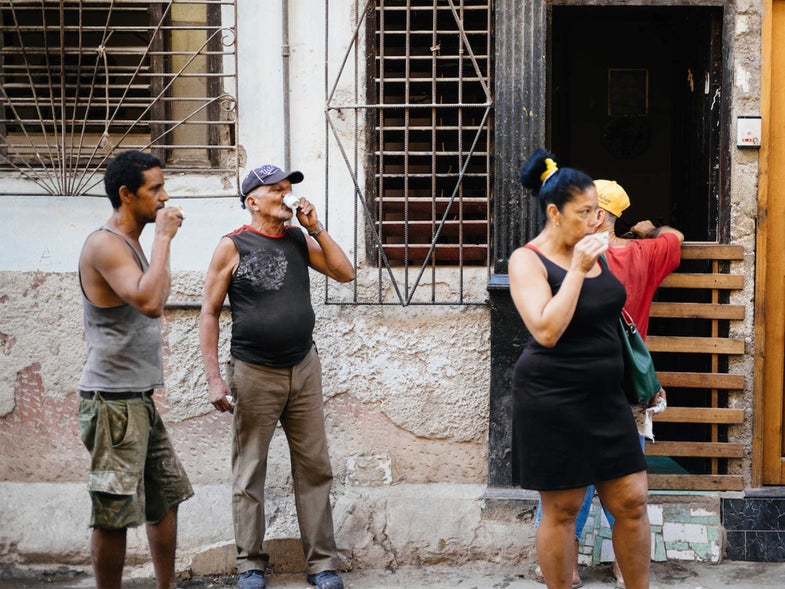 Cuba’s clock stopped in 1960 when the U.S. imposed a trade embargo. More than 50 years later, the American portrait of the Caribbean island 90 miles south of Florida is still painted with old cars and colorful but crumbling buildings. And without much opportunity to see the country over the decades, we’ve ignored some of its most crucial cultural mainstays, such as its coffee. “In Cuba, coffee is not about the type of extraction or the quality of beans,” says Adam Goldberg. “It is a vehicle to bring friends together.”

Goldberg is a New York-based software engineer with an affinity for coffee, food, and photography. He founded A Life Worth Eating in 2007 to document his meals and adventures. “When I was traveling, I would get to know a city through its coffee shops. They became a guide for me,” he says. “Coffee shops attract young professionals with a good pulse on their city.” So last year, Goldberg co-founded Drift, a biannual magazine that explores a city—its culture and its people—through the lens of coffee.

Cue Havana. “I had always dreamed of visiting Havana,” writes Goldberg in Drift. With American-Cuban relations easing, he dedicated the month of September there for volume three of Drift, uncovering a complicated history and discovering a passionate culture that has persevered and is willing to do whatever it takes to keep Cuban coffee culture and the island’s black gold alive.

A patron inside Cafe la Luz. “They only serve espresso,” Goldberg says, “and one employee works three machines, each one capable of brewing four espressos at a time. There are 12 stools, so the employee pulls 12 shots every five minutes or so.” Adam Goldberg

At the turn of the 20th century, Havana had more than 150 cafes. This number slowly started to shrink as coffee took a backseat to the island’s production, and export, of rum and cane sugar (white gold). Castro nationalized coffee production after the Cuban Revolution in 1959, and the island turned its efforts to farming food. “Production declined but consumption rose,” says Goldberg. “50 years ago, Cuba was producing 60,000 tons of coffee a year.” Today, that number is closer to 6,000 tons.

With less coffee available to bring to the market, the Cuban government introduced a rations system in 1962: subsidizing four ounces of coffee per person per month. Café con chícharo, or coffee with chickpeas, was also brought to market. “It’s a mix of ground, toasted beans and toasted chickpeas,” Goldberg says, “made in an effort to get more coffee to more people.” Café con chícharo makes an earthy, rustic, and slightly bitter brew, so adding sugar to coffee is commonplace. This chickpea/coffee hybrid is sold throughout the city at bodegas, Cuban neighborhood ration stores. Coffee can still be purchased at regular markets, called mercados, but at a significant markup that most Cubans, who make an average of $20 a month, can’t afford. Because of the limited quantity of coffee, the drink is always consumed in small amounts from small cups known as tacitas.

Left: “He has been using the same moka pot for over 20 years,” Goldberg says. “A stovetop moka pot is the most common way to brew coffee at home in Havana.” | Right: A moka pot in action. Adam Goldberg

With coffee rationed out and many Cubans unable to afford the rich, thick pulls of frothy espresso from cafecitos, Cubans have taken to making coffee at home. “You’d be challenged to find a home without a moka pot,” Goldberg says of the most common way to homebrew coffee on the island. But this is not of the simple brew-and-pour variety; Cubans have developed a way to mimic the heady crema of a cafe-bought espresso. After the coffee brews, “a small amount is whipped with brown sugar until it looks like the crema on a shot pulled from espresso,” Goldberg says. The rest of the coffee is then added to the tacita.

Left: Inside a window coffee vendor’s house. The coffee was brewed in a moka pot and poured into the serving thermos. To that, sugar is added and a cup is sold for one peso (about three American cents). | Right: The view looking out from the same window. Adam Goldberg

The abundance of homebrewed coffee gave rise to the ventanilla. For those not drinking coffee at home or stopping by a cafe before work, there is the option of drinking coffee outside the windows of other people’s homes, where coffee is sold through windows opened up to the street. “The price for a coffee at window cafes is cheaper,” Goldberg says. “Coffee from ventanillas usually costs 1 Cuban peso, which is the equivalent of three American cents.” Cafes charge 1.5 pesos.

“It’s remarkable how many people you see drinking coffee from 7 a.m. to 9 a.m.,” he says. The island’s coffee culture as it’s known today took shape in the decades following the Cuban Revolution. And the drink became a source of unity and pride throughout the island. “Despite the limited resources, everyone is able to make it work.”

A young boy buys coffee from a ventanilla to bring to his parents. Adam Goldberg
The view of Old Havana from Plaza Vieja. Visitors are allowed to the roof for a look through the building’s camera obscura, “which is one of two in the world,” Goldberg says. You can see a contrast of old and new and evidence of the ongoing restoration taking place in Old Havana. Adam Goldberg
Castro founded the Committees for the Defense of the Revolution in 1960. The idea was to have a leader in every neighborhood that would bring the community together and keep an eye on any counter revolutionary ideas. There is an annual celebration in September of the establishment of the CDR, for which chicken and vegetable caldo, or soup, is prepared on the street in caldrons and offered to anyone who passes by. Adam Goldberg
An old car as seen in Old Havana. “The frame is old, but everything inside is usually new,” Goldberg says. There are some Russian cars from the ’70s, ’80, and ’90s, but most of the old cars in Cuba predate the revolution. Adam Goldberg