Depending on what and where you eat, you might mistake an Indonesian dish for an Indian curry, Chinese fried rice, or a Filipino stew. But nothing is quite like Indonesian cooking. And once you learn what goes into it, you’ll be able to recognize it anywhere.

A World of Influences

No doubt, Indonesia’s multifaceted cuisine has numerous influences: Arab and Indian traders brought spices, rose essence, and dishes like martabak (stuffed pancakes). The Spanish introduced chiles. Rijsttaffel (literally “rice table”) is the larger-than-life Dutch interpretation of the traditional Indonesian meal of rice plus several dishes. But the Chinese immigrants likely had the biggest impact, bringing noodles, soy sauce, and soybeans to the archipelago.

Of course, cooking styles and ingredients vary according to region. The food found on Java and Sumatra are better recognized globally—think beef stew (rendang), chicken satay (sate ayam) and chicken turmeric soup (soto ayam). But branch further out to places like Sulawesi (Celebes) and you’ll find meat- and blood-stuffed bamboo tubes, and fresh-caught fish, grilled and served with a variety of dipping sauces (sambal).

But a Dark Horse in the U.S.

While Indonesian cuisine is revered both within the country and regionally in Southeast Asia, it isn't as well-known as say, Thai or Vietnamese cuisine in the U.S. There could be any number of reasons, but chief among them is population. The 2010 U.S. Census counts only 95, 270 Indonesians in the country. Since Indonesia was a Dutch colony until 1949, it has had fewer political, economic, and cultural ties to the United States than many other Asian nations. For a comparison, that same census accounts for 3,416,840 Filipinos living in America.

Global cuisine is often promoted through restaurants. Unfortunately, the Indonesian Embassy knows of only 34 restaurants stateside. Not that I’m surprised. Many Indonesian dishes are laborious to prepare, and few Indonesians who migrate to the U.S. deign to open restaurants. (I speak from experience; my family ran one in Seattle from 2007 to 2012. It was popular but a lot of hard work. Let’s just say family cohesion won out in the end!)

If you’ve cooked Indian and/or Thai food, you’ll find the ingredients familiar. Turmeric, cumin, cinnamon, and coriander are some of the most-used spices. Lemongrass, lime leaves, ginger, and galangal are ubiquitous. Nutmeg, native to Indonesia’s Banda Islands (part of the Maluku or original Spice Islands) is usually sprinkled into Dutch-influenced dishes like macaroni schotel and risoles. These spices and herbs are blended into spice pastes called bumbu, the very foundation of Indonesian cooking. Herbs like lemongrass, salam, and galangal (a trio I dub the Indonesian bouquet garni) are tossed in while cooking and removed prior to serving.

You can easily find Indonesian ingredients at an Asian market that caters to a Southeast Asian clientele, and maybe even at a specialty store. Any other ingredients, like some of the ones below, can be bought online. I have included my prefered brands but in all honesty, some ingredients are so hard to come by, I say take what you can get! Online sources include:

Used sparingly, aromatic ginger’s unique camphor-like flavor is a welcome addition to dishes like vegetables in coconut stew (sayur lodeh) and Balinese duck curry (bebek Betutu). This reddish-brown rhizome is probably one of the more obscure Indonesian herbs—even I only discovered it recently when my mom revealed the secret ingredient in her fried corn fritters. Sometimes mistakenly called lesser galangal, aromatic ginger is available in the U.S. dried or powdered. 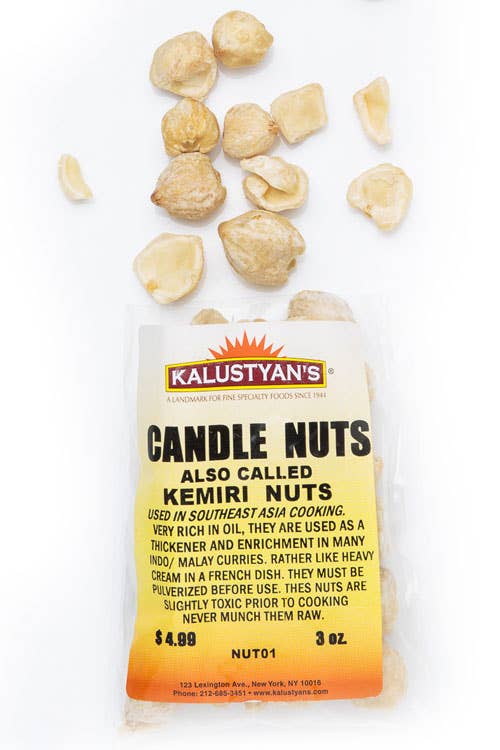 Similar in size and texture to macadamias (which is a decent substitute), candlenuts must be cooked—usually pan-fried—first to remove toxins. These waxy, cream-colored nuts are usually ground with other herbs and spices to add body and texture to curries, sauces and braises. They are high in oil content and will go rancid quickly if not refrigerated. Frozen, they keep for up to a year.

Fried shallots are showered over everything from fried noodles to soups and sambals. My mom even adds it to spring roll fillings for flavor and crunch. Fried shallots aren’t difficult to make, just tedious and messy. My mom would slice shallots (and Asian shallots are tiny, mind you!), dry them in the sun, then deep-fry. When I came home from school as a little girl, I would often find my mom next to a mountain of fried shallots sitting on newspaper to soak up the oil.

For convenience, I buy fried shallots in big containers from the Asian market. These store-bought brands are usually imported from Vietnam and Thailand. My mom swears by the packages of fried shallots she stashes in her suitcase every time she returns from a trip to Indonesia. 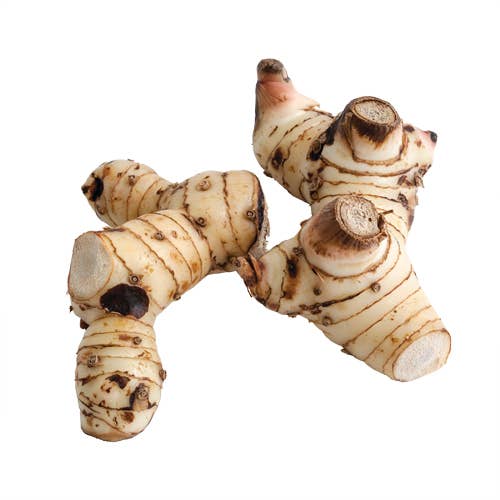 A member of the ginger family, galangal has a distinctive fragrance and flavor. Look for the more tender young galangal that’s pinkish in color. In Indonesian cooking, it is used in braises, soups, and for fried chicken. Peel then chop the rhizome before adding it to a spice paste. Or cut into half-inch slices and toss into soups. If you can’t find fresh galangal, buy them dried and soak 10 minutes in hot water before using. 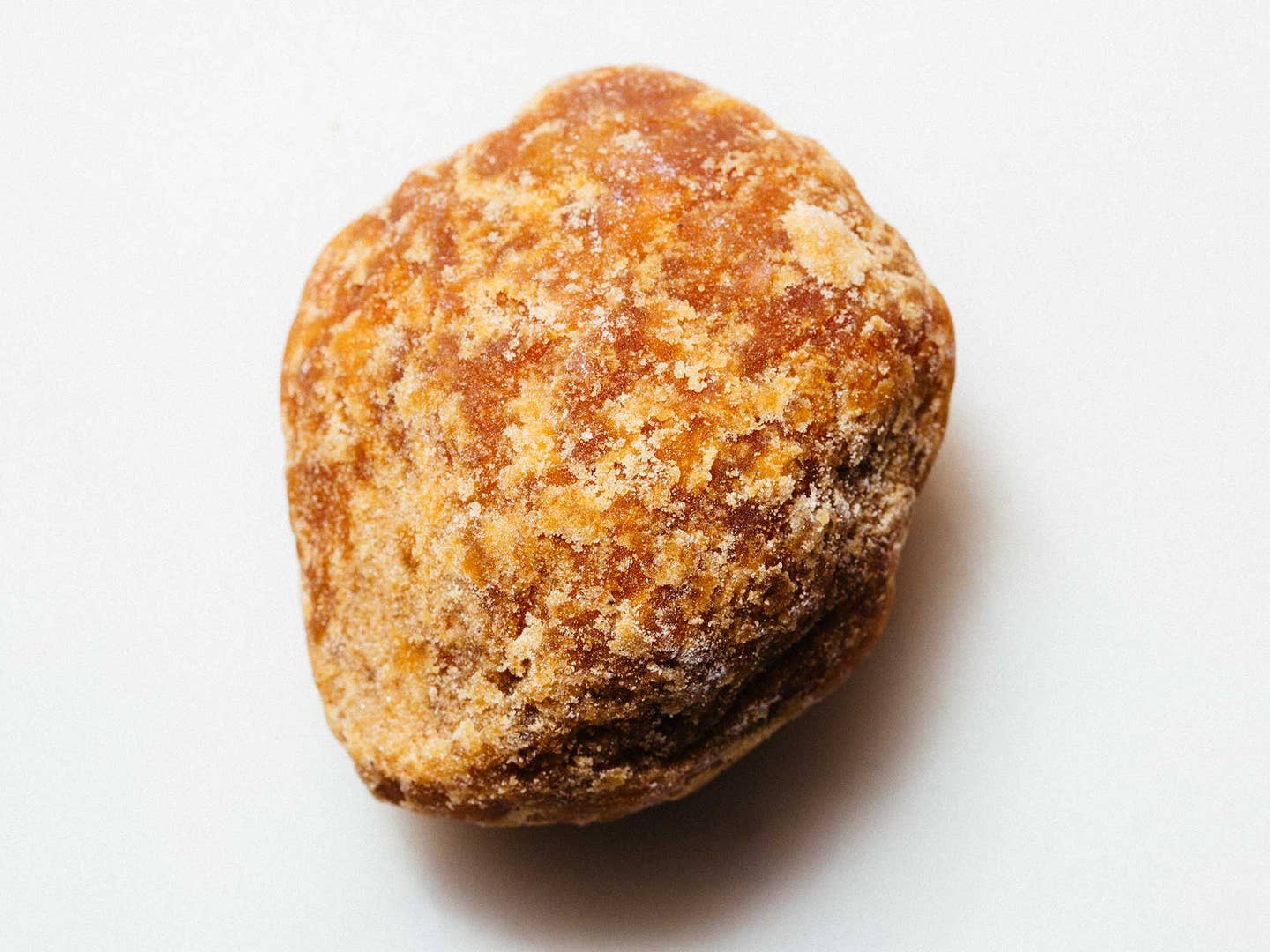 Indonesian palm sugar is sold in solid blocks or cylinders. Made from the sap of the arenga palm (and sometimes coconut palm), it tastes of molasses or caramel and is used to make sweets and to balance flavor in certain savory dishes. To measure, shave or grate pieces off the block. Granulated coconut sugar or dark brown sugar make good substitutes. 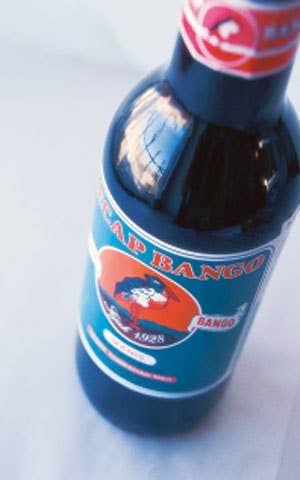 The Chinese introduced Indonesians to soy sauce and they made it their own by adding sugar! The Indonesian version has the usual soybeans, wheat, and salt but also includes palm sugar and molasses. It is much thicker and sweeter than regular soy sauce which is called kecap asin or kecap Cina (salty or Chinese kecap). If you can't find Indonesian sweet soy sauce (Cap Bango is my favorite brand), Chinese or Thai sweet soy sauce will suffice. Or you can make your own with this recipe.

The fried rice of my childhood is doused in sweet soy sauce, and when kitted out with chopped bird chilies and shallots, it makes a delightful dip for fried fish or fresh vegetables. I buy Cap Bango when I can find it, and Cap ABC is my second choice. 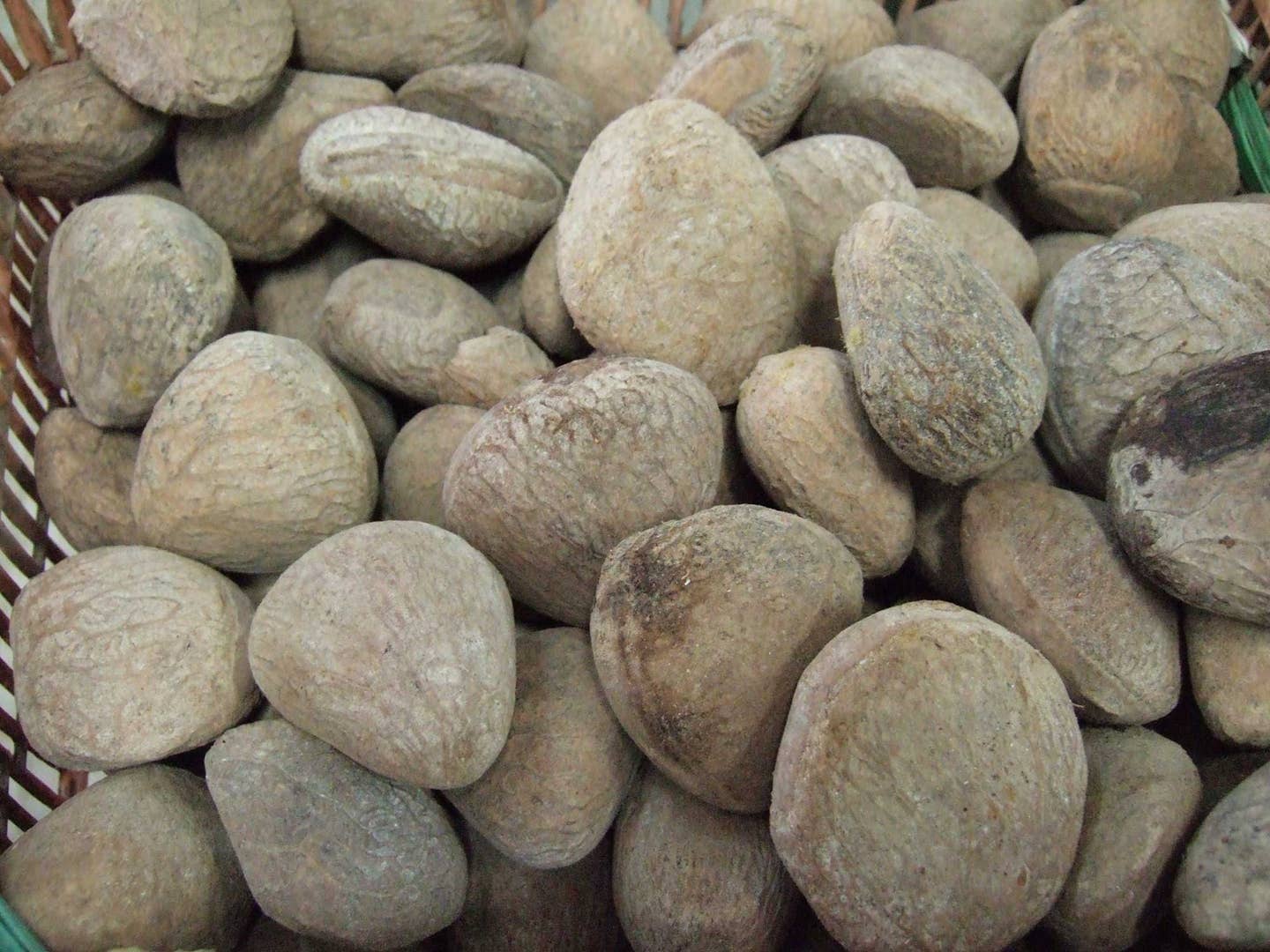 The kluwak “nut” is actually the seed of the kepayang tree, a tall tree native to the mangrove swamps of Southeast Asia. The oily, hard-shelled seeds contain hydrogen cyanide and must be boiled then buried in the ground to ferment and be rid of the toxin. W

hen cracked open, the chocolate-brown meat of the fermented kluwak nuts is ground up to prepare rawon, a thick, black stew made with beef or chicken. Kluwak is also made into sambal with garlic and chilies. Back in the day, my mom had to buy kluwak in the shell. She’d crack open each and every nut and scoop out the meat. It was a laborious process but the resulting dish was so tasty! Thankfully, now I can buy prepackaged dried, peeled kluwak even in the U.S.

Limes are indispensable in Indonesian cooking. The juice and rind are both used, for drinks, to flavor marinades, and in soups.

With its wrinkled skin and limited amount of juice, the lime called jeruk purut (makrut, or what used to be known as kaffir), is almost impossible to find in the U.S. unless you grow your own. Back home, my mom used the juice and rind (she'd toss it into the marinade) to brighten the flavor of barbecue foods like grilled chicken (ayam panggang) and satay. The leaves are more commonplace, adding fragrance and flavor to coconut-based braises and soups like tripe soup (soto babat). Potent whether fresh or dried, the leaves can be ripped off the spine and crumpled to release its fragrance and flavor; or slice thinly into ribbons. Frozen leaves keep beautifully.

Jeruk limo (Nasnaran Mandarin) are small and very juicy. They are excellent in sambals and used to neutralize the “fishy” smell of seafood. My uncle has a jeruk limo tree in his Southern California garden and my mom receives care packages every few months. She freezes the limes and uses them sparingly.

Another lime, jeruk nipis, is very similar to key limes. Squeeze over sambals and noodle soups. I often use a combination of lime leaves, key limes and Meyer lemon to replicate the flavors. 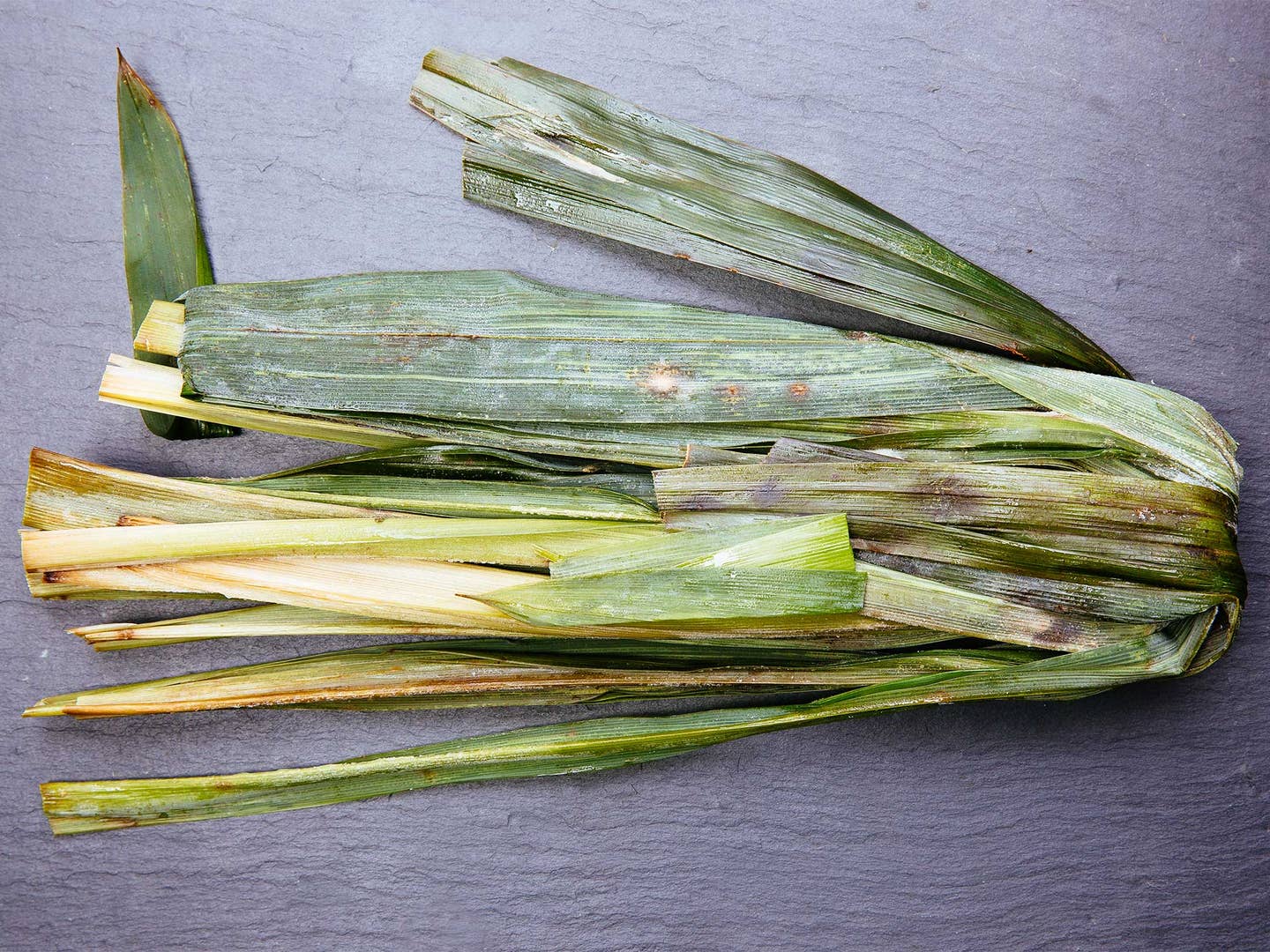 I've dubbed pandan the vanilla of Southeast Asia. This fragrant leaf imparts both aroma and color to many Indonesian dishes, both sweet and savory. Pandan leaves are often tied in a knot and steeped in a syrup that's added to various drinks and desserts. It is also tossed into sweet snacks like sweet black rice porridge (bubur hitam), coconut rice and curries.

As a coloring agent, the leaves are crushed together with some water and squeezed to release their green juice. Bottled pandanus extract is available, but the artificial flavor puts me off and I’d rather go with frozen leaves instead. I still dream of the pandan chiffon cakes that my mom used to make.

Salam leaves (Eugenia polyantha Wight.), a member of the cassia family, add a sweet, earthy flavor to many dishes. They are sometimes called Indonesian or Indian bay leaves. Indeed, they are used in the same way bay leaves are used in Western cooking, but the two are not interchangeable. Salam leaves are only available dried in the U.S. If you can’t find any at the Asian market, omit. It is one of three key ingredients in the Indonesian bouquet garni. 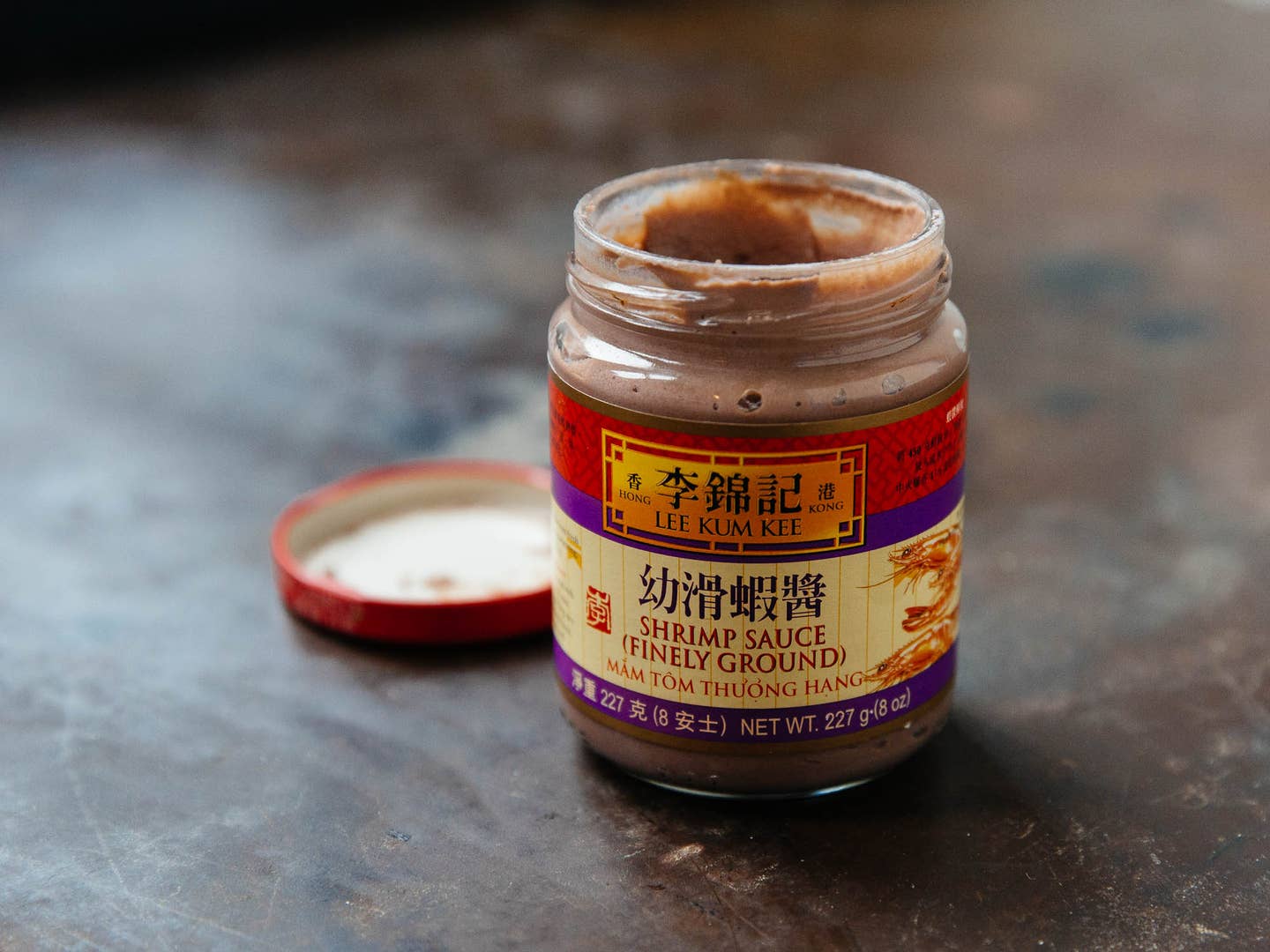 As a little girl, I ran the other way whenever my mom started frying shrimp paste. Sometimes, she’d fry it in her gigantic steel wok; sometimes she would skewer a large chunk of it and stick it in the open flame of our gas stove. Thankfully, she always cooked in our outdoor kitchen. The blackened shrimp paste was then sauteed with chilies, shallots, bell peppers and palm sugar to make my mom’s famous chili-shrimp paste (sambal terasi). Raw Indonesian shrimp paste is sold in solid blocks (a pain to break up) as well as in a cooked, granulated form which is so much more convenient to use—buy it if you find it. 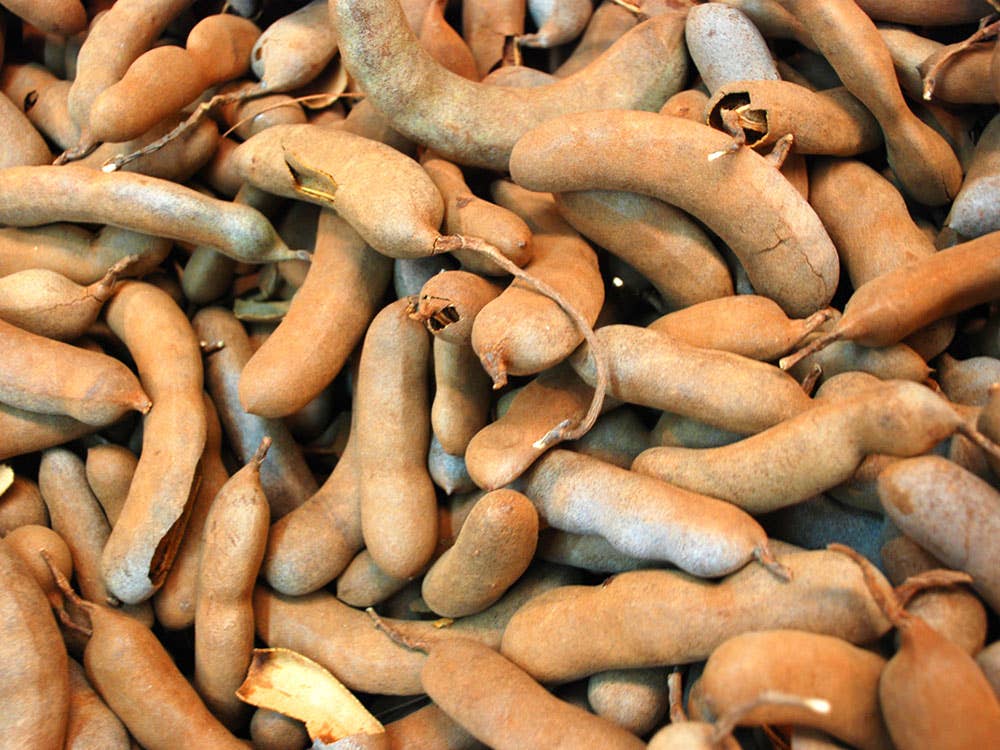 In Indonesian, asam literally means 'sour,' hence tamarind's name, asam Jawa. Other sour fruit exist (including asam gelugur and asam kandis) but tamarind is the souring agent I use most often. I've seen both dried tamarind pods and "wet" tamarind (coffee-colored blocks in cellophane packaging) at the Asian market, but I prefer wet tamarind. And if I can help it, I never ever buy the ready-made tamarind paste or pulp. It is so lacking in flavor. Break off chunks of wet tamarind and soak in hot water. Sieve to retrieve the pulp. 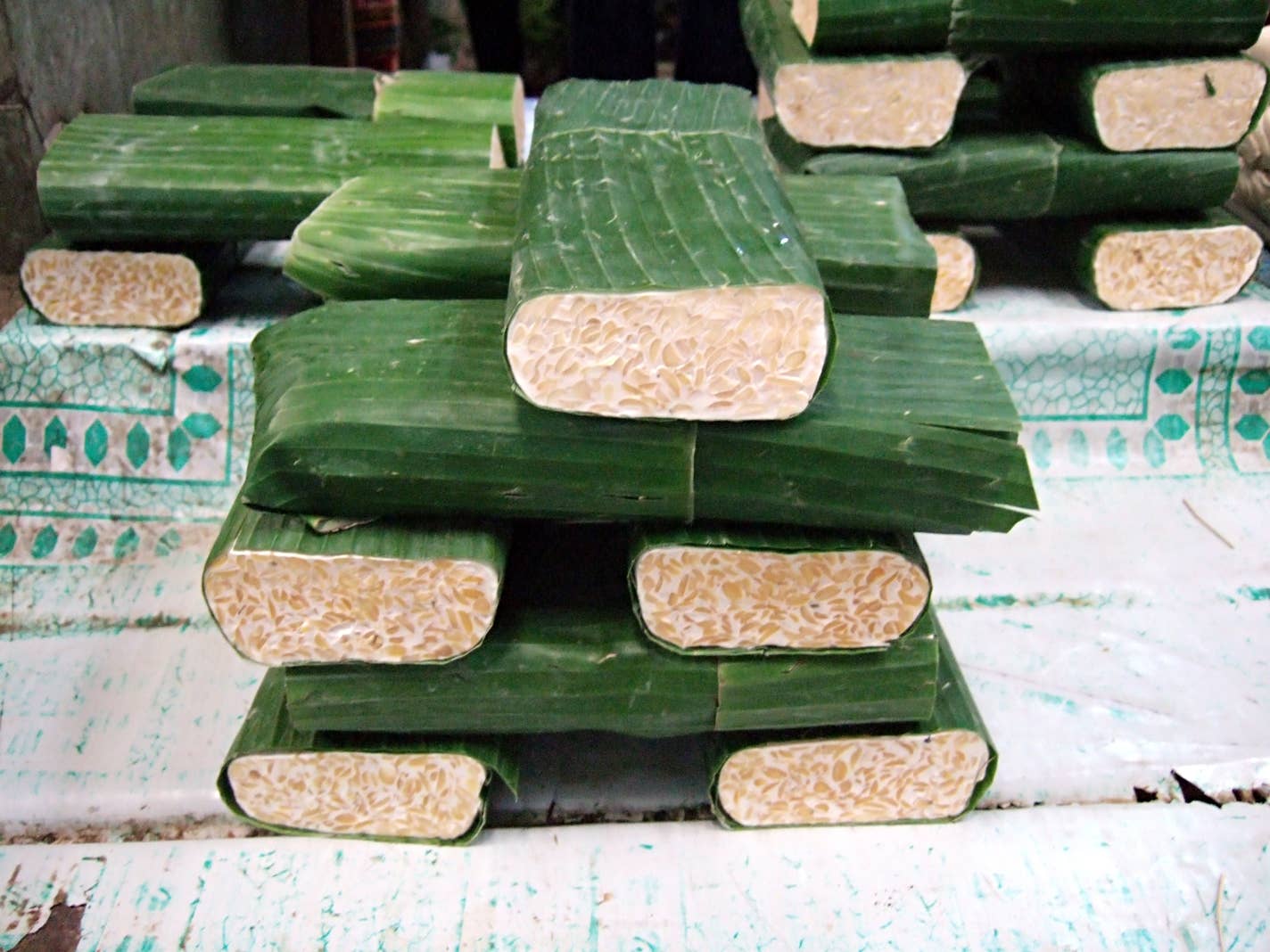 When Indonesians were given soy beans, they made tempeh—fermented soybeans compressed into savory cakes with a distinct, nutty flavor. Rich in protein and other minerals, tempeh is a nutritional powerhouse and a staple food for many Indonesians, especially in rural areas where meat is scarce. In the U.S., it is a popular meat substitute and available at many mainstream grocery stores. To make Indonesian recipes, buy the plain ones and leave the marinated or smoked versions for next time.