The fall and rise of the La Louisiane 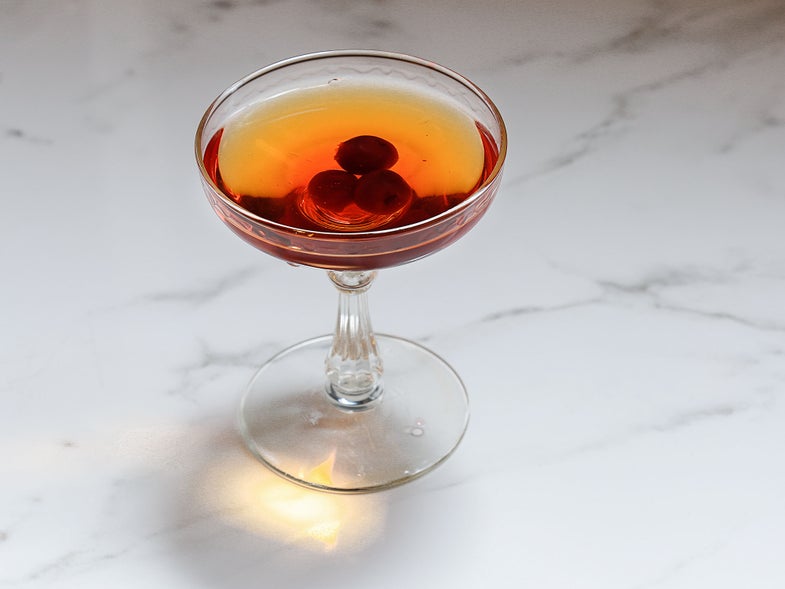 Just a Hand Grenade’s throw from the bottomless beer and Hurricanes of Bourbon street, New Orleans icons like the French 75 Bar at Arnaud’s and the Empire Bar at Broussard’s prove that the old classics still thrive. There you can drink excellent renditions of familiar Crescent City staples, from Old Fashioneds to Sazeracs. And if you look carefully on the menu, you may see a drink you don’t recognize: La Louisiane.

A seductively named drink built on rye, sweet vermouth, Benedictine, Peychaud’s bitters, and absinthe, the La Louisiane shares similar DNA to other New Orleans classics, but never made the same leap into the cocktail mainstream. It is the secret cocktail of New Orleans, and these days it’s starting to get its due.

The La Louisiane began as the house cocktail of its namesake hotel and Creole restaurant—a once-popular French Quarter spot opened in 1881 by the family that has run the legendary Antoine’s since 1840. The drink celebrates the multicultural heritage of New Orleans with ingredients from America (rye), France (Benedictine; absinthe), and Italy (sweet vermouth), with a nod to the Caribbean (Peychaud’s bitters). Stirred over ice and served “up” in a chilled glass with an optional cherry garnish, the burgundy drink is deliciously complex and aromatic: sweet, spicy, earthy, bitter, and tinged with anise.

The La Louisiane recipe was influenced by the Sazerac—one of America’s first cocktails. Chris Hannah, head bartender at the French 75 Bar, goes one step further to describe it as a cross between a Sazerac and a Vieux Carré. “The main spirit [rye] is softened and herbed by the Benedictine and vermouth, similar to the Vieux Carré. But the absinthe adds a thick and flavored anise roundness to the cocktail,” as in a Sazerac. The similarities between the La Louisiane and Vieux Carré have ignited a running debate among the cocktail-curious: Which of these classics came first?

“I think the La Louisiane is a better drink than the Vieux Carré,” says Paul Gustings, who features it among an impressive list of classics at the Empire Bar. Gustings (previously head barman at French Quarter institutions Napoleon House and Tujague’s) is convinced the La Louisiane was created in response to the competition from the hotel around the corner. “The Monteleone had the Vieux Carré, so they [Restaurant La Louisiane] decided they needed a house drink too.”

But local bartending legend Chris McMillian (whose restaurant and bar, Revel, he expects to open in New Orleans’ Mid-City neighborhood by the end of 2015) insists, with some persuasiveness, that the La Louisiane came first. “The restaurant opened in 1881, so it is likely that the drink appeared somewhere in this period of time,” McMillian argues. “The Vieux Carré did not appear until the first few years after the repeal of Prohibition in 1933.”

As with many classic cocktails, the truth is often coated in three layers of myth, but the drink’s original recipe gives some backing to McMillian’s side. The original La Louisiane called for absinthe, a spirit that was banned in 1912 and only made legal again 95 years later in 2007. If the La Louisane really did get invented only in response to the Vieux Carré, its initial recipe would have called for an illicit spirit.

A Drink Without a Home

Both the Vieux Carré and the La Louisiane were first immortalized in 1937 by Stanley Clisby Arthur’s book, Famous New Orleans Drinks and How to Mix ‘Em. But cocktails need places to thrive, not texts. The Vieux Carré enjoyed a permanent home at the Hotel Monteleone’s famous Carousel Bar, which eventually led to its spread across the U.S. The La Louisiane found no such luck., and after its home restaurant changed hands several times beginning in the 1930s, it fell into relative obscurity.

“The La Louisiane fell out of favor I’m guessing, when the hotel and [original] restaurant closed,” Hannah tells me. “And then it came back around the resurgence of the current cocktail era, in the early 2000s.”

The drink has been lovingly nurtured in the French Quarter in recent years, leading to its removal from the endangered species list. You can now find the La Louisiane on menus at cocktail bars around New Orleans and across the world. Locally, the Windsor Court Hotel features the drink. And at Cure, an Uptown New Orleans bar credited with kick-starting the craft cocktail renaissance in New Orleans, it was featured during their closing party for Tales of the Cocktail 2015.

Farther afield, the La Louisiane makes an appearance at Leo Robitschek’s cocktail menu at Eleven Madison Park in New York. The Hi-Lo Club, a cocktail bar in San Francisco, recently featured it as their “cocktail of the week,” and it has even shown up on the cocktail list of Sydney, Australia’s American-style restaurant, Black by ezard.

“Almost every cocktail bar in the world has now heard of the La Louisiane,” Hannah explains. “As soon as they found out there were other rye cocktails from New Orleans, they’ve been chomping at the bit to re-make them.”

Get the recipe for the La Louisiane »