(Re)Consider the Lobster: How to Grill the World’s Most Regal Crustacean

Skip the special occasion. And the pot of boiling water, for that matter. Buy and kill your own, then cook it the way our ancestors did: over hot coals 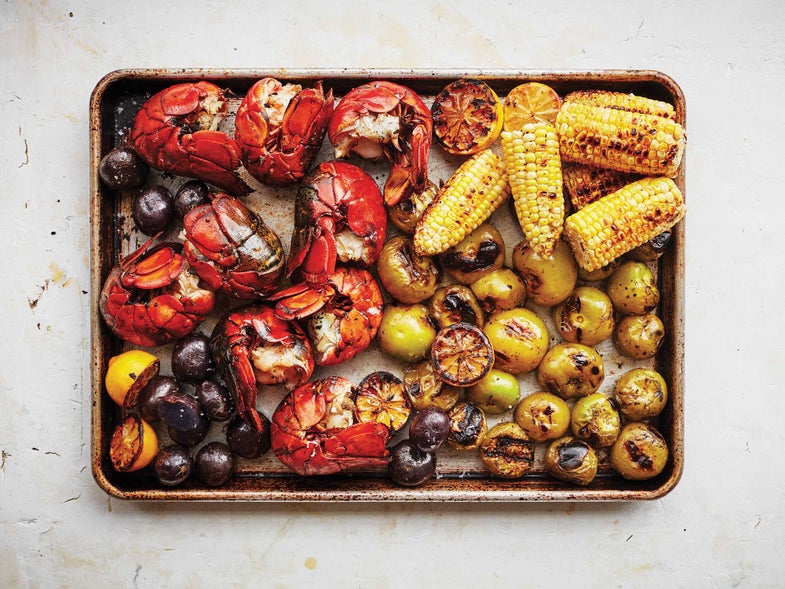 Eating lobster can be an elegant affair, but the process of getting it to the plate is more of an adventure. Plan to do a little dirty work. I remember this as I buy a 9-pound sack, carry it home, and brace for what’s next—bringing the knife down hard into the lobsters’ carapaces; the sandpapery sound of salt and oil rubbed onto the brittle shells; cracking apart the joints and clearing away the rainbow-colored innards; and the sizzle of the cold shells hitting the fire. For now, I place the bag in the fridge and ready the accoutrements for a grilled lobster dinner: sweet-smelling corn, inky blue potatoes, and soft golden bars of butter.

The regal reputation of lobster runs deep. Their scarlet red bodies graced the center of Dutch oil paintings in the 1600s, mosaics on the dining-room floor of ancient Pompeii, and the poetry of Virgil’s Aeneid and Walt Whitman’s Leaves of Grass. But lobsters have primitive beginnings—a fact that’s easy to recall when you see their spiny bodies crawling across a tank.

The crustaceans are part of the arthropod phylum, which includes spiders and mosquitoes, and according to fossilized shells found on British shores, they have been eaten as far back as the Stone Age. Back then, the creatures weren’t delicately prepared, nor were they petite. Our ancestors probably caught bigger, easier-to-spot ones, maybe as large as 45 pounds. The meat would have been tougher and plucked out, raw, and eaten with their hands. According to Elizabeth Townsend, author of Lobster: A Global History, coastal communities in Africa, who discovered fire almost 2 million years ago, were likely the first to cook them—and first to discover that their dark shells turn bright red when roasted over hot stones. Later civilizations, across South America and Europe, began boiling them and preserving the meat by drying it with smoke or soaking it with brine and burying it in the sand.

It wasn’t until the mid 19th century, after haute French chefs began experimenting with lobster, that it became a food of the elite. Americans followed suit—scalloping, fricasseeing, potting, deviling, and simmering the meat in white wine with cayenne and nutmeg—before developing a much simpler and wildly popular approach in the 1930s: the lobster roll. Even doused in butter or mayonnaise on a white bun, it was considered to be special, as overfishing had led to scarcity.

Due to meticulous industry efforts over the past few decades, the number of large-clawed American lobsters has steadily increased. In fact, the population is now stable in Maine, which is why the American lobster is also known as the Maine lobster. Landings (or lobsters sold) in the state have surged from 20 million a year in 1980 to a record of around 130 million in 2016, making it one of the most successful fisheries in the world. Prices have dropped accordingly, while lobster restaurants, co-ops, and food trucks have continued trending up.

Now that laws dictate lobster can only be caught and sold at the ideal weight for eating, between 1 and 2 pounds, their taste is consistently better, too—especially when cooked in straightforward ways. “We boil or steam lobsters,” says Cyrus Sleeper, a lobsterman and longtime local in Sprucehead, Maine. “Or, occasionally, we grill them.” Just as our ancestors did and just as I plan on doing.

But first there’s some work to be done. While enjoying the finest caviar at home requires nothing more than investing in a tin, the finest, most tender lobster imaginable requires sticking a knife into a living thing. I pull the sack out of my refrigerator and work up the courage to plunge a forearm into the bag’s opening. A curved, ridged shell squeaks between my fingers and I quickly pull it upward and out. In my hand, the lobster arches his blue-black claws and tail up and back like a skydiver, revealing a pretty orange underside. I pay my silent respects and set it atop my cutting board. As I pick up the knife and begin to slide it in, a rush of adrenaline hits—a mix of dread and delight that I’m sure I’m not the first to feel.

Talk and Tips From Bruce Fernald, a Sixth-Generation Lobsterman From a Coastal Village in Maine

“I named my boat Barbara Ann, after my wife, and I put it in the water March through December. A lot of guys go all year round, but I’ve been fishing for 44 years and I don’t have to and I don’t want to.

“About 65 to 70 people live in our town on Little Cranberry Island, and about 24 of them have lobster boats. Two of them are my brothers, and my father was one of the founding members of the lobster co-op we all belong to. It’s a pretty tight-knit community: There’s one restaurant, and it’s open June through October when tourism brings the number of people in town up to about 300. There was a store in town, but it didn’t survive.

“There’s a state law that says you can’t have more than 800 lobster traps. So I have 800 traps. My grandfather and father used to use wooden buoys and traps. Once full with lobsters, you had to haul them into the boats by hand. Now we use hydraulic motors. They whisk the trap out of the water in unbelievable time. All the traps are wire now, with two lobster entrance points instead of one. I miss the smell of the wooden ones, but other than that, not much has really changed.

“When the water warms up to around 40 to 42 degrees on the ocean floor, the lobsters begin moving closer to shore. The sweetest, tenderest ones come in between July and October. When I cook them, I like to steam them in a pot with 2 to 3 inches of water. Add butter, a salad, some bread, and champagne, and I’m happy.”

How to Buy Lobster

Focus less on color… Habitat influences the shell tones of a live lobster, which can range from browns and blues to greens or even violets. But all varieties (except the rare white lobster) will turn red when cooked due to a carotene-like pigment in their exoskeletons.

…And more on size: All Maine lobsters sold will have a carapace (the part of the shell that covers the head and legs) between 3 1/4 and 5 inches long, and will weigh between 1 and 2 pounds. The tastiest though are in that sweet spot between 1 and 1 1/2 pounds.

Count legs and antennae: Missing legs or claws, or short antennae, may indicate that lobsters have been in a tank for a while, where they’re prone to fighting and cannibalism. Look for lobsters with all extremities intact, which may help indicate freshness.

Look for “soft” or new shells: Lobsters molt—or shed their old shell and grow a larger new one—dozens of times during their lives, up to 25 times in the first five to seven years alone (which is about how long it takes for them to reach 1 pound). After that, most will molt around early summer each year. The meat is at its moistest and most delicious just after, from July through October, when it’s had a few months in a softer shell and soaked up more briny juices from the ocean. Most lobsters you buy from Maine during this time of year will have new shells, says Cyrus Sleeper, a lobsterman in Sprucehead, Maine. But, to make sure, look for bright orange underneath the raw claws, a shell that deforms somewhat easily when poked or squeezed, and a shell that contains few dark scratches, a sign they’ve been dragging it across the ocean floor for a while.