At the beginning of March, I got my first taste of the vibrant dining scene in Charleston, South Carolina with a mad dash through the Charleston Wine and Food Festival. Not only did I spend days and days chatting with chefs and food and wine folks, but I dined my little heart out at many of the city’s restaurants, throwing back as many oysters and shrimp as possible. From the dazzling seafood towers at The Ordinary to the fried shrimp at Leon’s Fine Poultry and Oyster Shop, there was no mollusk left unshucked, no crustacean left unboiled.

Another constant in Charleston: Red Clay Hot Sauce, a line of hot sauces, hot honeys, and spices that are found on restaurant tables all over the city. (Truly, a drizzle of Red Clay Hot Honey on a juicy piece of fried chicken at Leon’s saved my life one hot afternoon.) In fact, it was co-founded by Geoff Rhyne, a chef who's worked in some of Charleston's best restaurants, like the Peninsula Grill and The Ordinary. So when I got my hands on a bottle of their new Spicy Cocktail Sauce, I had a good feeling that I’d soon be ditching the other sad bottles in the back of my fridge, and I was right.

Related: How to Shuck an Oyster 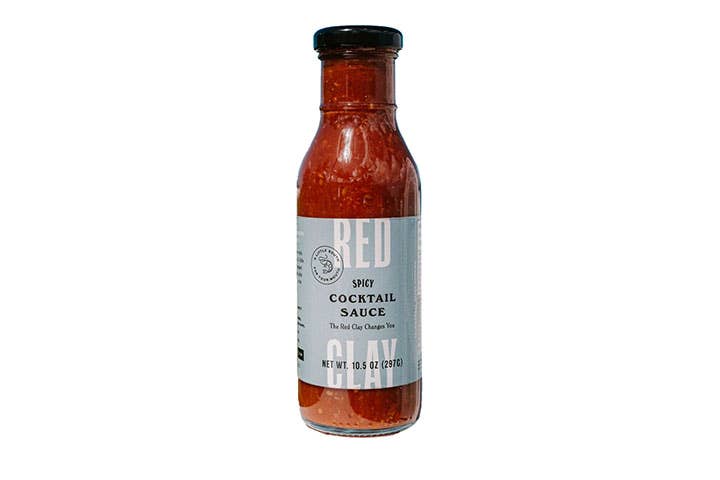 This cocktail sauce is unlike any other I’ve tasted out of a bottle, delivering a rich tomato flavor that’s laced with the bright acidity of sherry vinegar and a healthy dose of pequin peppers (also known as “bird peppers”) and horseradish for heat. Part of the magic, I learned, is that Red Clay started their recipe creation by creating their own ketchup using San Marzano tomatoes and toasted spices like ginger and star anise, rather than using a commercial corn syrup-laced version as their base. In the final product, sumac, fennel seeds, and lemongrass all make an appearance, too. The result is a super flavorful sauce with heat that builds, then lingers. As much as I love my own homemade version, the layers of flavors in Red Clay's make it a step above the classic.

How to Cook Your Shrimp for Shrimp Cocktail

Spring and summer are shrimp season on the coasts, and those sweet, fresh shrimp are just now starting to come in on the shrimping boats in South Carolina. And while there are many ways to cook shrimp, perfectly ocean-fresh seafood needs little intervention. Nathan Hood, a Charleston native, and chef of Post House Inn, recommends poaching rather than boiling your fresh shrimp, with the shell on. “​​I keep the actual shell on, which is kind of like cooking a piece of meat on the bone—it imparts more flavor and keeps them from shriveling up.” He likes to create a flavorful poaching liquid with onions, garlic, and bay leaf before adding the shrimp (head off, shell on), poaching until they’re about 80 percent done before pouring them out to finish cooking. “You want them to have a nice pop to them,” says Hood. Then serve them right away while steaming hot or cooled to room temperature on a platter; if chilling, put them in the fridge, but don’t throw them in an ice bath—you’ll lose all that good seasoning. Serve with spicy cocktail sauce and lemon.

How Else Should I Use This Cocktail Sauce?

Hood ascertains that cocktail sauce is the most important condiment at a low country oyster roast, a unique dining experience in which small clusters of oysters are steamed with seawater, then strewn across a table outdoors and shucked while hot. It's also ideal with another low country classic, Frogmore Stew, which resembles a Louisiana crawfish boil but with shrimp, new potatoes, corn, some kind of sausage, and in Hood's case, blue crabs, too.

Since I'm not currently dwelling in a region awash with fresh seafood, I’m inclined to put it on a variety of things, not limited to shrimp and oysters. The fried fish fillets I frequently cook for work-from-home lunches in my air fryer (yes, I finally bought this one and I love it) would benefit, as would a seafood pasta sauce with butter, or as a sauce for anything fried like a crab cake or even mozzarella sticks.

Where do I buy it?

Right now it's available via the Red Clay Hot Sauce website for $15/bottle, but keep an eye out at retailers and grocers in the next few weeks.