This classic Sichuan tofu dish is a hot global sensation—here’s a rough idea how that happened. 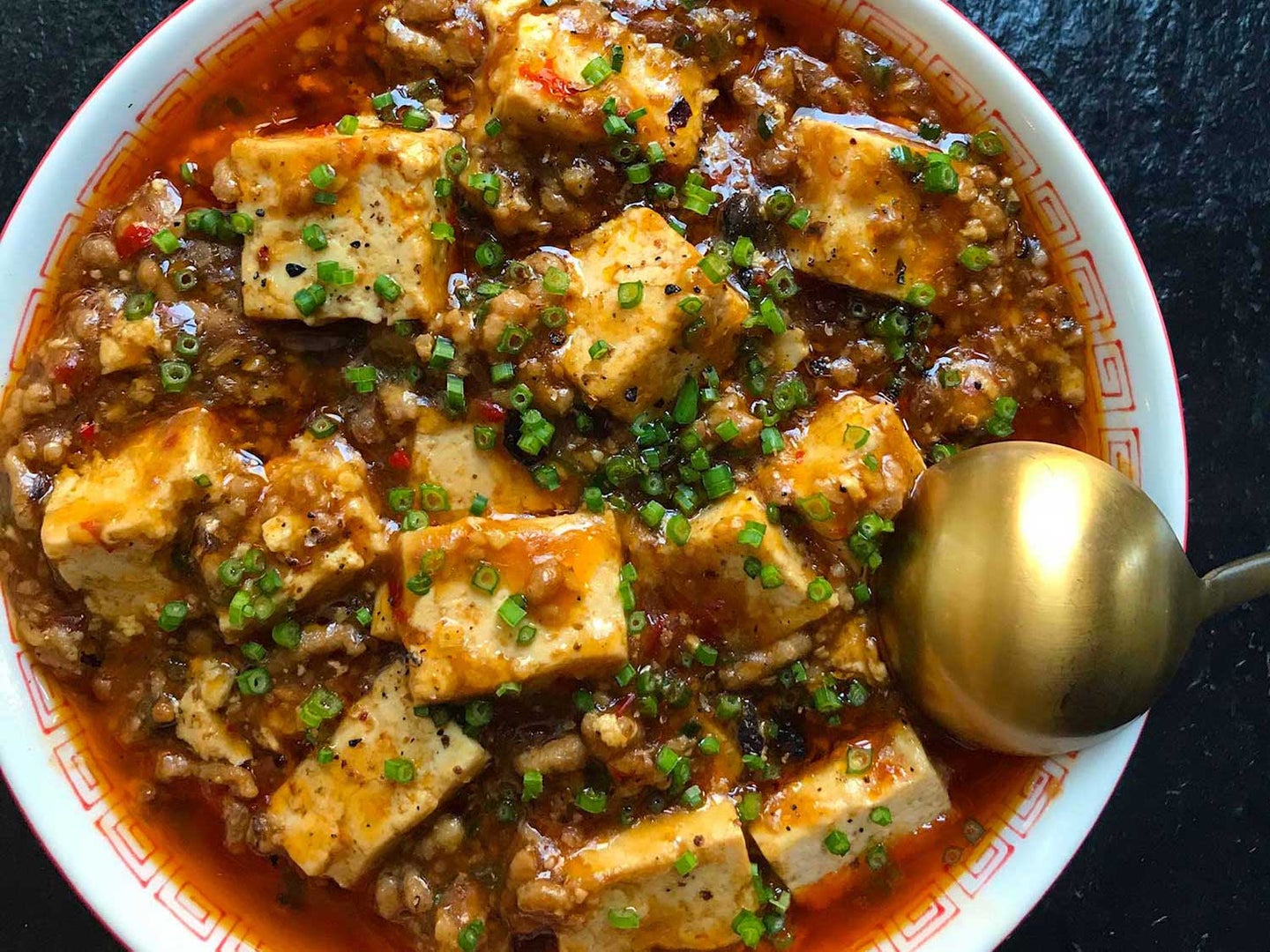 “Mapo tofu is the first thing I remember as a kid eating and thinking, Holy crap, it’s so good!” says Jenny Gao, owner of Fly By Jing, a brand of Sichuan sauces and ingredients, and who was born in Chengdu, Sichuan’s capital. This classic dish, made of custard-like tofu cubes in a venomously spicy meat sauce, leaves a lingering numbness on your lips and, often, an irresistible hunger for more. “It’s perfect on rice because it’s so saucy and you just want to keep going,” says Gao. “It’s really such a comforting dish.” That is if your idea of savoring comfort food is to be completely absorbed in the physical reaction to what you’re eating. The cacophony of flavors hosted by a bright, vermilion oil infuses you with its potent ma la, or “numbing-hot” sensation as you eat it. The addition of Sichuan peppercorn is the numbing element; dried chile peppers and doubanjiang, a chile bean sauce, bring the heat.

Ever since mapo tofu blazed its fiery trail from China’s province of Sichuan, to Japan (where it’s called mabo dofu), and eventually onto the menus of U.S. restaurants, people all over have been, quite literally, eating it up.

Fuchsia Dunlop, author of The Food of Sichuan, thinks it’s striking how quickly mapo tofu has become “this celebrity Sichuan dish”; when she returned from travels in Chengdu to her home in England in 1996, nobody really knew about it yet. She thinks its proliferation in theU.S. is partly due to the success of such hotspots as Mission Chinese Food, the Sichuan restaurant helmed by Danny Bowien with locations in San Francisco and New York, which expanded upon the explosive flavors of Sichuan food destinations often found in immigrant enclaves of cities (Spices II in the Bay Area, and the now-shuttered Spicy & Tasty in Flushing, New York, for example). These restaurants helped indoctrinate Americans to potent flavors rarely tasted before in Chinese-American takeout.

But how did this singular dish land in the world to begin with? It’s named after its inventor, Chen Ma Po, which was also the name of the tofu restaurant that she opened in Chengdu in the late 19th century—this origin story was described in a 1908 guide to Chengdu, and is generally accepted as true, says Dunlop. It is also widely understood that the phrase ma po (ma here is short for ma-zi, or pock-faced) translates to “pock-faced grandma,” which was Chen’s nickname. “Chinese people do have a habit of calling a restaurant by a funny nickname,” Dunlop admits, noting a restaurant in Chengdu called Hairy Mole Baozi, after its owner. “It’s meant affectionately.”

The recipe calls for doubanjiang—Chinese fermented bean paste, which gives the sauce its body, and salty, funky umami flavor, or xian, as it’s known in Chinese. The doubanjiang is a key element to making the dish, as is a final dusting of ground Sichuan peppercorn. Aside from that, using soft tofu is texturally ideal, and the traditional meat that is used for the dish is ground beef—although you will find versions throughout China and beyond that are made with ground pork instead.

The dish is comprised mostly of tofu, with meat used as more or less a flavoring agent (a supporting role with which many Americans aren’t typically acquainted). This makes it flexible for vegetarian adaptations, however, as the ground meat can easily be swapped out for some minced mushrooms. Just don’t skip the essential Sichuan seasonings that give mapo tofu its signature sting. “You can’t say it’s mapo tofu if you don’t have chile bean paste and Sichuan pepper,” says Dunlop. Gao agrees. “Having pork or shiitakes is nice, but you won’t beat the umami of doubanjiang,” she says. “People say that doubanjiang is the soul of Sichuan cooking.”

This is actually a broad category of Chinese fermented bean paste. It can be made with different types of beans, although soybeans are commonly used. It can be smooth or chunky in texture, and have additional ingredients for flavor, such as chiles—in which case it can be called chile bean sauce or paste. The type of doubanjiang most associated with mapo tofu, since it’s from Sichuan province, is Pixian bean paste, named for the county in Sichuan where many of these sauces are produced. It’s made with fermented broad beans, or fava beans. The amount of time it’s aged is also a differentiator. Most mass-produced doubanjiangs that are widely available in supermarkets are aged for around six months to a year, while premium sauces may be aged for longer, and exhibit more nuanced, deep flavors.

Dou chi are salted and fermented black soybeans that can be purchased and used whole, rather than being blended up into a doubanjiang. They’re like little pellets of pure umami, or xian, so they’re a great way to scatter some extra oomph throughout a dish. A little goes a long way, so keep a jar of these sticky little beans in your pantry and throw them into a Chinese stir-fry now and then. You might find containers of Black Bean Garlic Sauce on the Chinese condiment aisle of your supermarket, which are these beans mashed up with garlic.

Sichuan peppercorn, or hua jiao, is an essential spice in Sichuan cooking as it delivers one half of the region’s singular ma la (numbing-hot) flavor combo. Botanically, this spice is not like other types of peppercorns at all; rather than the fruit of a vine, like black pepper, they are the seeds of a small tree known as prickly ash, and you might see it labeled as such.

Hong You, or Red Chile Oil

Make your own red-orange chile oil by infusing dried chiles and herbs in oil and use it right away for the most vibrant flavor. Hong you can be made with just chiles or chile flakes, or with additional aromatics to lend nuance to the bright, toasty heat of roasted chiles. It can also be strained if you’re looking for just the pure oil, or include the crispy, toasted bits of garlic and spices on the bottom. You’ll find many options for the latter variety in an Asian supermarket, or online.