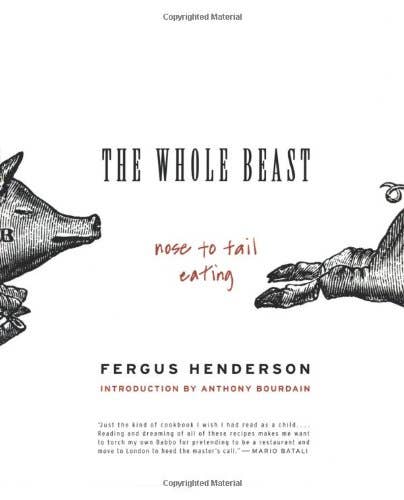 The Complete Nose to Tail, A Kind of British CookingSHOP NOW

by Fergus Henderson and Justin Piers Gellanty
Henderson, the British champion of whole-animal cooking, brings us a compilation of recipes that range from rolled pig's spleen to a light salad of anchovy and tomato. Framed by surprising, silly photos (a Barbie doll with a pig's ears for wings) and the chef's trademark wit, it's a powerhouse of a cookbook with a good sense of humor._ —Kellie Evans

HarperCollins, $50
Buy The Complete Nose to Tail, A Kind of British Cooking 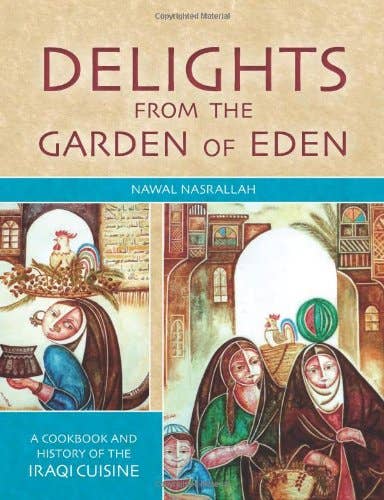 Delights from the Garden of Eden: A Cookbook and History of the Iraqi CuisineSHOP NOW

Equinox Publishing Ltd., $50
Buy ​Delights from the Garden of Eden: A Cookbook and History of the Iraqi Cuisine** 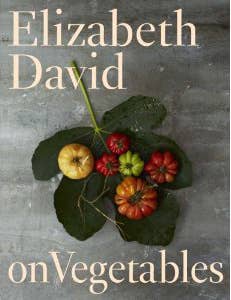 by Elizabeth David
This posthumous collection from David—one of the most noted food writers of her time—is so charming it feels like you're calling the British author at home to get a recipe for, say, mushroom risotto. She's busy, but manages to dash off instructions. The results are delicious, and accompanying essays bring David to life in our minds, as well as our kitchens. —Keith Pandolfi 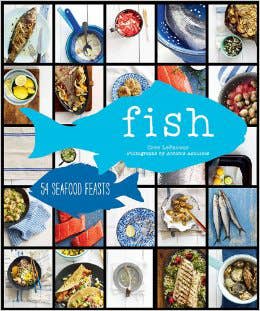 by Crée LaFavour
This clear-voiced guide to piscine cookery elevates weeknight menus. Meals such as cod and curried red lentils with apple-currant relish, and buttery trout in lemon-horseradish cream with prosciutto-laced kale and crispy parsnips, are far more impressive than their effortless preparations suggest. —Helen Rosner 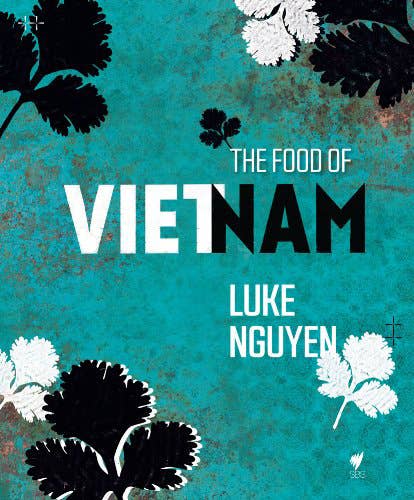 The Food of VietnamSHOP NOW

by Luke Nguyen
In his debut cookbook, Australian chef Nguyen explores Vietnamese regional cooking, from the wok-tossed eel of the southern Mekong Delta to the char-grilled pork of the northern mountain hill tribes. Full of anecdotes and lavishly photographed, it's an inviting, accessible primer on Vietnamese cuisine. —Farideh Sadeghin 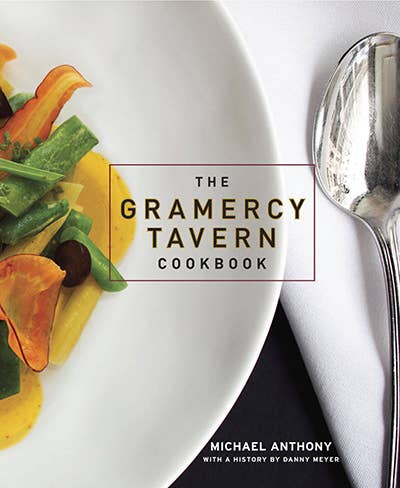 by Michael Anthony and Dorothy Kalins
With its generous size and mouthwatering photographs, it looks like a coffee table fixture, but this book from the famed Manhattan restaurant is meant for true home cooking. Corn soup with honey and a julienne of shiso leaves, earthy mushroom lasagne topped with crispy garlic, and other recipes are as approachable as they are elegant. _—Sophie Brickman 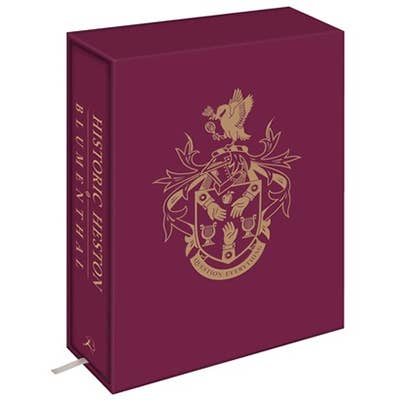 by Heston Blumenthal
This idiosyncratic work by Blumenthal, the chef behind the experimental fine dining restaurant The Fat Duck in Bray, England, pays tribute to those who inspired him. His deeply researched essays on culinary tricksters—such as the medieval cooks who disguised pork as apples to take their diners by surprise—are accompanied by whimsical illustrations and elaborate recipes that celebrate the ingenuity of the British kitchen. —Tejal Rao 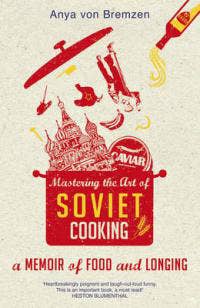 Mastering the Art of Soviet Cooking: A Memoir of Food and LongingSHOP NOW

by Anya von Bremzen
In this lyrical work, von Bremzen, who grew up in Soviet-era Moscow, relates the story of three generations of her family in the USSR. The account is at once harrowing and funny as hell, an epic history told via kotleti(Soviet hamburgers) and contraband Coca-Cola. —James Oseland

Crown Publishers, $26
Buy Mastering the Art of Soviet Cooking: A Memoir of Food and Longing 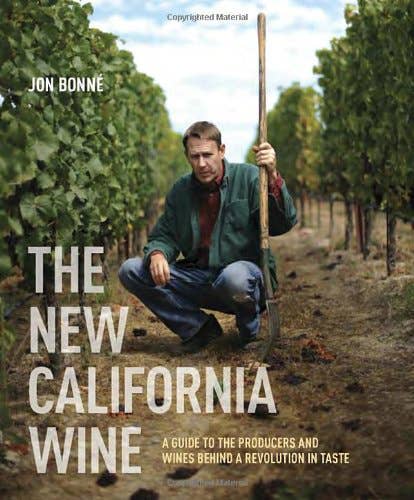 by Jon Bonné
Big, jammy, oaky, buttery? Guess again. Bonné, the San Francisco Chronicle's wine editor, turns expectations of California wines on their head, profiling new producers, growing areas, and approaches to winemaking that are yielding all sorts of exciting bottles. Brisk, elegant, steely and most of all, nuanced—with this seminal account of a vinicultural revolution, these are the adjectives with which we will now be describing the Golden State's wines. _—Betsy Andrews 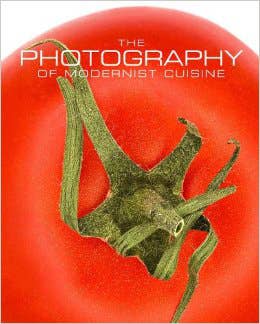 The Photography of Modernist CuisineSHOP NOW

The Cooking Lab, $120
Buy The Photography of Modernist Cuisine 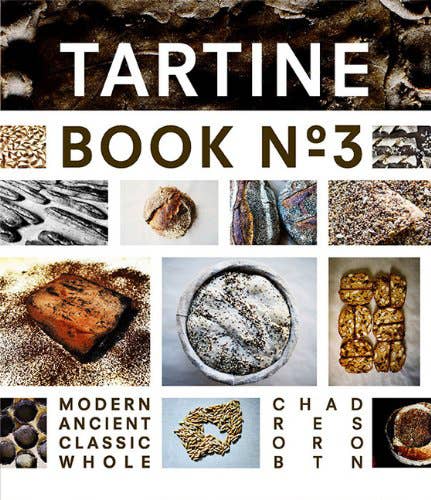 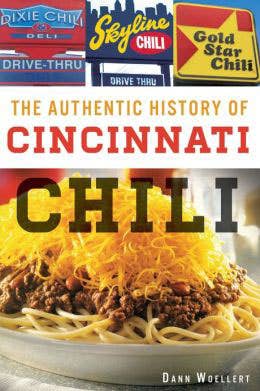 by Dann Woellert
The two most common questions I get when I tell people I'm from Cincinnati are 1) Was WKRP a real radio station? and 2) What's the deal with Cincinnati chili? The answer to that first question is no; as far as the second, let me refer you to this lovingly researched book by Dann Woellert, which traces what, in my opinion, is the most brilliant use of meat ever developed by mankind from its roots in Macedonia, to the neighborhood chili parlors that give my hometown a truly unique flavor. —Keith Pandolfi

The History Press 2013, $19.99
Buy The Authentic History of Cincinnati Chili 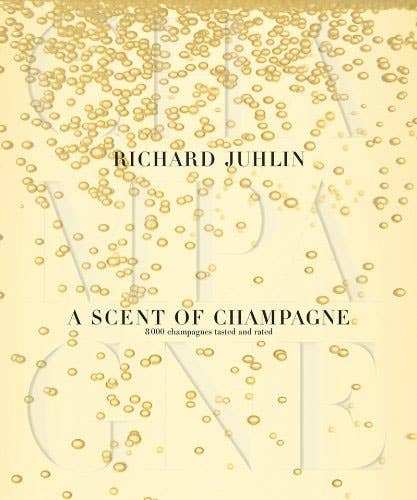 A Scent of Champagne: 8,000 Champagnes Tasted and RatedSHOP NOW

by Richard Juhlin
Richard Juhlin has tasted thousands of bottles of Champagne over the course of his career as a professional drinker; in this volume, the top 8,000 get the comprehensive treatment, with ratings for each, plus histories and anecdotes. For any dedicated drinker of bubbly—or admirers of ambitious undertakings, or just anyone who's a big fan of statistics—this massive book is an indispensable resource. —Helen Rosner 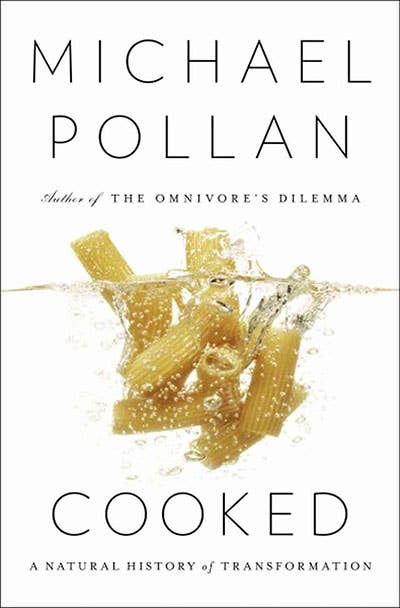 by Michael Pollan
After years of being a passionate food activist but a somewhat indifferent cook, food writer Michael Pollan (author of In Defense of Food, The Omnivore's Dilemna, and The Botany of Desire) apprenticed himself to barbecue pit masters, home cooks, bakers, cheesemakers and brewers to master every aspect of cooking. His account of his experiences, interwoven with the scientific, philosophical and cultural history of man's relationship with food, is his most compelling work yet—and the ultimate case for why cooking matters. —Karen Shimizu

The Penguin Press, $27.95
Buy Cooked: A Natural History of Transformation 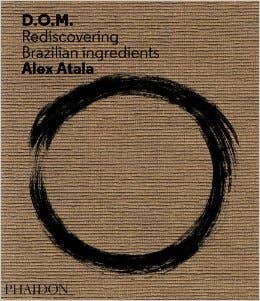 by Alex Atala
I may never be able to cook Alex Atala's "Ants and Pineapple" at home—Atala's ant species of choice, saúva, resides in northern Brazil, not Central Park— but that didn't impede me from happily digging into his exquisite new cookbook; it's a deep-dive into the dishes and philosophy of his restaurant (D.O.M, in Sao Paolo), and an exposition on the beauty of his native country. —Sophie Brickman 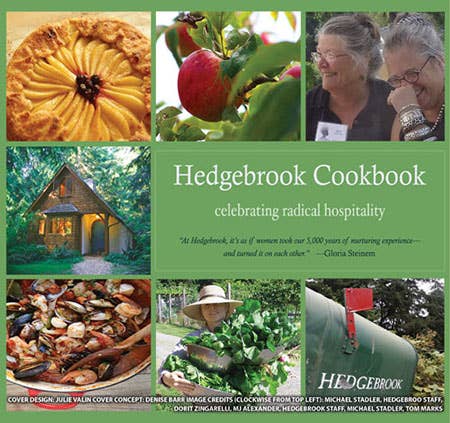 by Denise Barr and Julie Rosten
Written by Denise Barr and Julie Rosten, chefs at Hedgebrook, a retreat on Whidbey Island in Washington State's Puget Sound, this heartwarming cookbook tells the story of this magical place, where for 25 years, women writers have come to work on their art, and eat glorious communal dinners. The recipes reflect the abundance of the Pacific Northwest and the generous, nurturing nature of the retreat. Lusty dishes like cioppino, fennel gratin, zucchini bisque, and lavender shortbread cookies share pages with reminiscences by such notable writers as Gloria Steinem, Dorothy Allison, and poet Carolyn Forché, who all testify to the importance of a fine meal shared among friends to keep artists' spirits buoyant. —Betsy Andrews 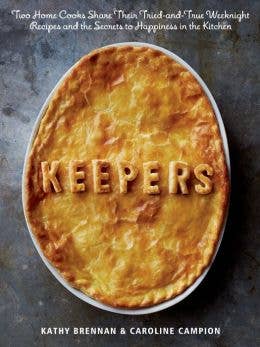 by Kathy Brennan and Carolyn Campion
This smart, friendly work, by former SAVEUR editors Kathy Brennan and Carolyn Campion, has become the cookbook that I reach for when I get home from the office. With over 130 delicious, adaptable recipes—hearty sausage and white bean gratin topped with toasted panko crumbs; black bean and squash enchiladas baked in a bright tomato sauce; salmon baked with spinach and cream—it's perfect for weeknight cooking. —Karen Shimizu

Rodale, $27
Buy Keepers: Two Home Cooks Share Their Tried-and-True Weeknight Recipes and the Secrets to Happiness in the Kitchen 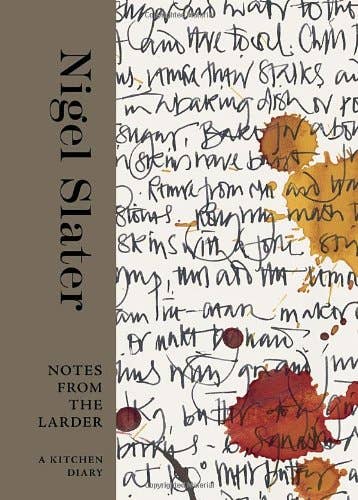 Notes from the Larder: A Kitchen Diary with RecipesSHOP NOW

by Nigel Slater
There are few writers as lyrical and precise as the great British home cook Nigel Slater. As he proves in his newest book, even his daily shopping lists and notes (collected here, along with their associated recipes) make for an intimate and delightful read. Slater cooks every day in his London home, so the recipes include wintery beef stews and fresh summer salads, with beautiful photos of light-drenched lemon tarts and cherry-almond crumbles. But what carries the book are Slater's sweet, strange, and sometimes funny musings, which range from the joy of Brussels sprouts and blenders, to a meditation on the overwhelming amount of work cooks face around the holidays. Luckily, there's always Slater's "lifesaving soup" recipe—made with Vietnamese chile paste and broccoli florets—to lift our spirits. —Tejal Rao

Ten Speed Press, $40
Buy Notes from the Larder: A Kitchen Diary with Recipes 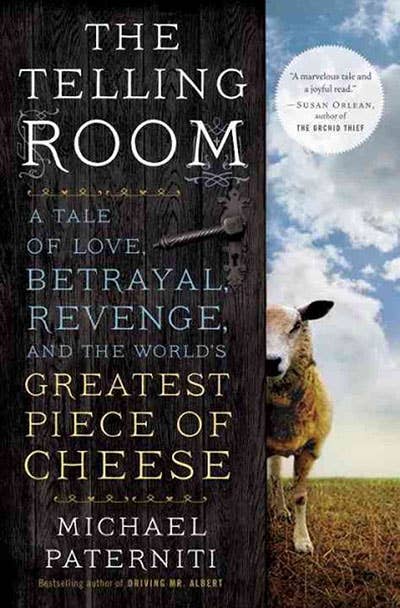 The Telling Room: A Tale of Love, Betrayal, Revenge, And The World’s Greatest Piece of CheeseSHOP NOW

by Michael Paterniti
I admire writers who become irrationally obsessed with mundane subject matters. Especially when they convince me to share in that obsession. Susan Orlean did it with flowers in The Orchid Thief, now Michael Paterniti has done the same with cheese. So fascinated does Paterniti become with the cheese made by a Spaniard in a small cave (or Telling Room) in Castile that he relocates his family to the village of Guzman to learn its secrets. In doing so, he becomes embroiled in an unforgettable story of love, betrayal, murder plots, and a passion for food that's anything but cheesy. —Keith Pandolfi

Dial Press 2013, $27
Buy The Telling Room: A Tale of Love, Betrayal, Revenge, And The World's Greatest Piece of Cheese 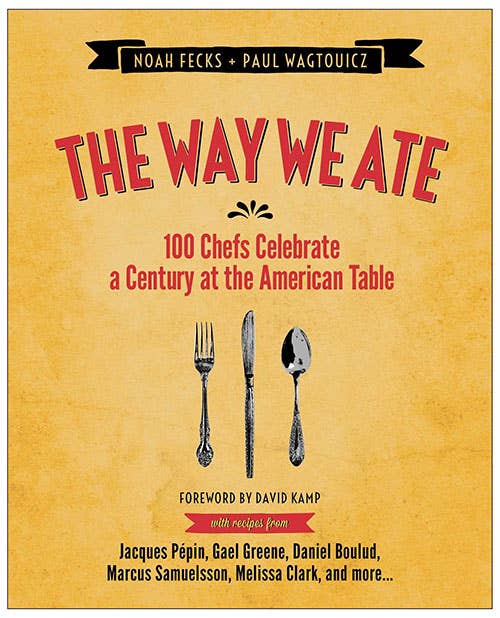 The Way We Ate: 100 Chefs Celebrate a Century at the American TableSHOP NOW

by Noah Fecks and Paul Wagtouicz
Photographers Paul Wagtouicz and Noah Fecks (a SAVEUR contributor) called up 100 of the world's top food folks—from Jacques Pépin to Melissa Clark to Mark Forgione—assigned each one a year from the last century, and asked them to create a recipe that encapsulated the era. The result is just as much fun to sit down and read as it is to cook from. —Helen Rosner

Touchstone, $35
Buy The Way We Ate: 100 Chefs Celebrate a Century at the American Table