A Season for Brussels Sprouts 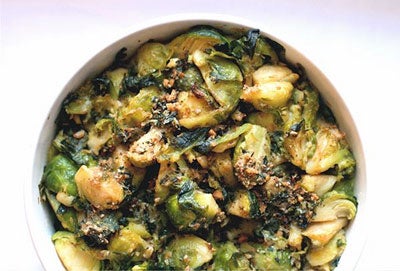 My love affair with Brussels sprouts began with great reluctance; like many survivors of the “boiled vegetable” generation, I only knew one version: waterlogged and lifeless. So when a college housemate plunked down a pan of oven-roasted Brussels sprouts sometime during senior year mid-terms, I wrinkled my nose and visualized the peanut butter-and-jelly sandwich I would eat instead. Thankfully, one bite of the earthy, gently caramelized buds was all it took to change my mind.

Things heated up quickly after that first reintroduction. I began to scour grocery stores and farmers’ markets for these pint-sized cabbages, and quickly made them a fixture of my cooking. Like sweet potatoes, winter squash, and other cold weather vegetables, they were a natural fit for the rustic and cozy cooking style I prefer at home.

During these late autumn days when they hit peak season, it is not unusual for me to eat Brussels sprouts several times a week. Drizzled with olive oil, browned in the oven, and dusted with sea salt, they’re as addictive as French fries. Shredded and sauteed with briny capers or toasted almonds, they make a charismatic side dish. And sliced into quarters, they add substance and to autumn chilis and pasta dishes.

And while I prefer them dressed up in exciting ways, at the end of the day, I might even welcome a plate of plain, old boiled Brussels sprouts to the table. They may not be glamorous, but when it comes to true love, a beautiful vegetable is in the eye of the beholder.

Season: Generally September to November in colder parts of the country (the Northeast and Midwest, specifically). In warmer areas, especially California, the season is extended—generally August to February.

Where to find it: Farmers’ markets are always the best place to look for Brussels sprouts on the stalk, but they’re also sold off the stalk in grocery stores (look for plastic wrapped pint containers), as well as Whole Foods and other natural food stores.

Leah Koenig is a freelance writer, home cook, and food columnist for the Forward.