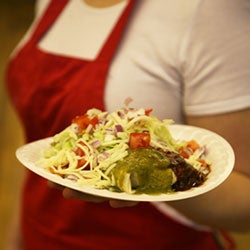 This simple, overstuffed burrito is typical of those found at local lunch counters across New Mexico. Our recipe is based on ones in two classic Southwestern cookbooks: The Feast of Santa Fe by Huntley Dent (Simon & Schuster, 1985) and The Border Cookbook by Cheryl and Bill Jamison (Harvard Common Press, 1995). The machaca filling—which takes its name from the Spanish verb machacar, meaning to pound or crush—consists of slow-stewed, shredded beef chuck seasoned with pepper, onion, garlic, and lime. In New Mexico, it’s customary to order your burrito “Christmas” style all year round, in reference not to the holiday but to the smoky and sweet combination of red and green chile sauces that top the burrito.