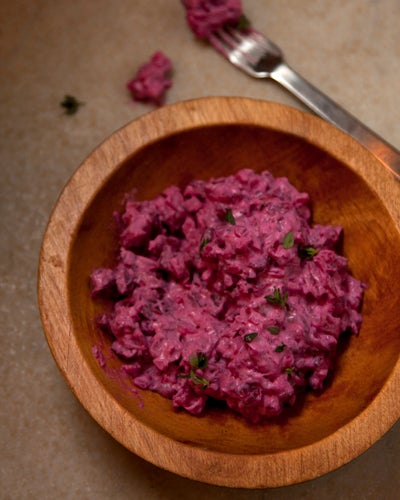 This Swedish dish is a Christmas classic. Maxime Iattoni
SHARE

This recipe was developed by Marcus Jernmark, chef at Aquavit in New York City, as part of the restaurant’s traditional julbord spread for Christmas. “Herring salad with beets is very holiday-oriented,” Jernmark says. In Sweden, “it’s a fixture on the Christmas table — and the Christmas table only.” Jernmark hypothesizes that the dish originally came to be as a way to use up scraps from the other herring preparations and pickled beet salads that dominate the table this time of year. “Regular beet salad is diced a little large, and most herring salads use larger pieces. This is fluffy, creamy — pulsed, almost like it’s been in a food processor. It’s perfect for scraps.” It’s now such a fixture of the Swedish Christmas spread that it’s made from scratch, as in this recipe, which uses unsweetened whipped cream for body.