We get dozens of cookbooks each week at SAVEUR, and every month we share our favorite new releases—books that, through one avenue of greatness or another, have earned a place on our over-stuffed shelves. This month, we found escape in Mediterranean and Thai cooking and got down and dirty with books on foraging and food systems. 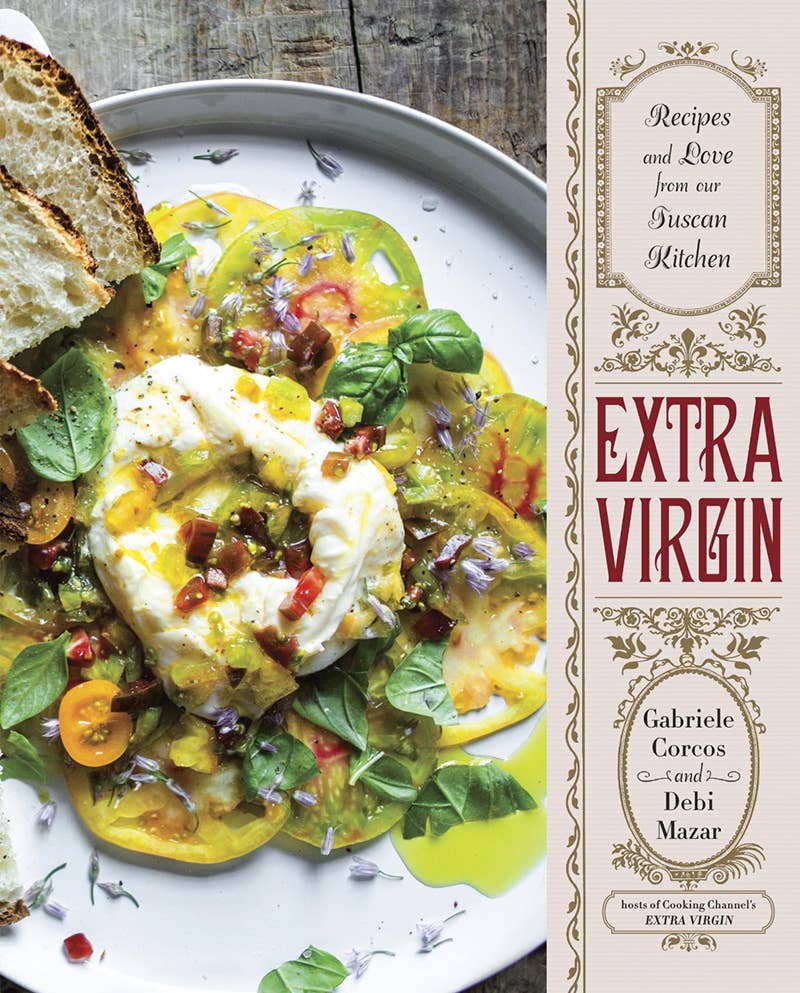 Extra Virgin: Recipes and Love from our Tuscan KitchenSHOP NOW

By Gabriele Corcos and Debi Mazar
When Italians want to compliment a woman on her fidanzato, or boyfriend, they often say, "Ai scelto bene"—you've chosen well. Most people would agree that actress Debi Mazar (Goodfellas, Entourage) chose exceedingly well when she fell in love with and married Gabriele Corcos, a handsome Italian from a generations-old family farm in the hills above Florence who happens to love to cook, especially the Tuscan specialties he learned from his nonna. Debi is no slouch in the kitchen, either, though she initially was more attuned to the southern Italian cooking she grew up with. Their union spawned a melding of culinary influences, a Cooking Channel show called Extra Virgin, the website Under the Tuscan Gun, and this debut cookbook (not to mention two adorable daughters). The book is as much a chronicle of their love story as a primer on Italian home cooking. In addition to more than a hundred recipes—from the simple pepper and potato stew that reminds me of my own Neapolitan heritage to the classic Tuscan bread and vegetable soup, ribollita, to an elaborate Sicilian-inspired dish of baked pasta wrapped in eggplant—there are sweet snippets of the couple's life in Brooklyn and Fiesole. If ever there was a romantic cookbook, this is it. And underlying it all is Debi and Gabriele's passion for the real purpose of cooking: to provide for the ones we love. —Camille Rankin

Available May 6 from Clarkson Potter, $32.50
Buy Extra Virgin on Amazon 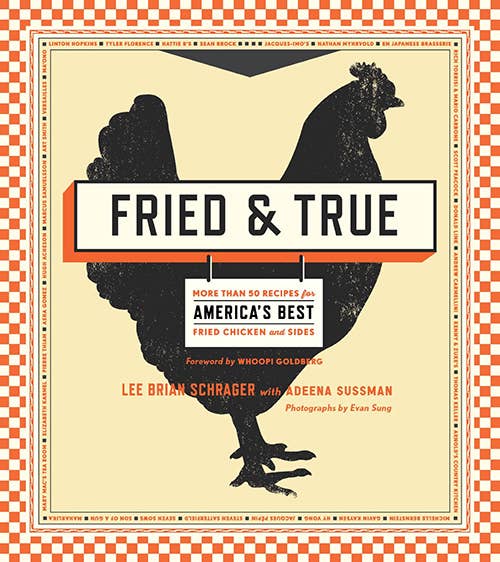 by Lee Brian Schrager with Adeena Sussman
For most of my life I wasn't really a fan of fried chicken; I just didn't eat it that often growing up. As I've gotten older I've gotten a bit wiser, and now I can't get enough of the dish. I'm thrilled for the release of Fried and True: 50 Recipes for America's Best Fried Chicken and Sides, by Lee Brian Schrager with the help of Adeena Sussman—a veritable bible of fried chicken. The duo travelled the country in search of regional specialties and fried chicken originals and have assembled recipes for more than 50 takes on the dish from restaurants all over the U.S., from Parm's fried chicken cacciatore in New York to the fried chicken sandwich with pickled coleslaw and Red Rooster aïoli from Son of a Gun in California. The book also offers some fried chicken 101, including cooking tips, a rundown on tools, and a lesson on breaking down a chicken. With gorgeous photos and a narrative that is both entertaining as well as informative, this book is one I will turn to again and again for all of my fried chicken cravings. —Farideh Sadeghin 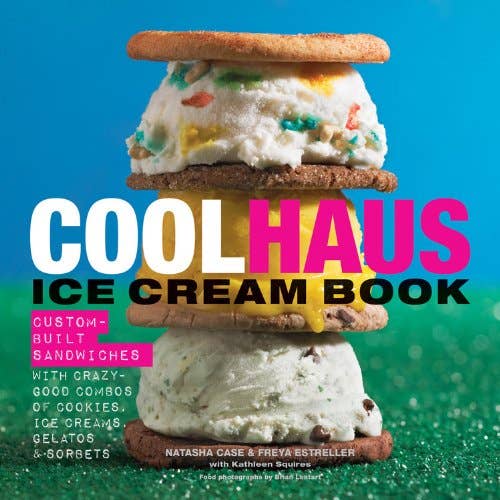 By Natasha Case & Freya Estreller, with Kathleen Squires
A few years ago, some friends who lived nearby worked for Coolhaus, the mobile ice cream sandwich shop that sold their wares from silver and hot pink former postal trucks. I loved finding any excuse to visit, because their freezer was always well-stocked with delicious cookies and ice creams in the brand's famously quirky flavors. Now, even if you don't have an insider hookup, or happen to live in one of the one of the four lucky cities where Coolhaus trucks roam the streets (LA, New York, Austin, and Dallas), you can still stock your own freezer with these addictive goodies thanks to Coolhaus' first cookbook. Inside, alongside the inspiring story of would-be architects turned ice cream entrepreneurs Natasha Case and Freya Estreller, you'll find ice cream recipes from the classic to the wacky—Blueberry Cobbler, Nutella Toasted Almond, Olive Oil & Rosemary, Whiskey Lucky Charm—and equally creative cookies for sandwiching, including Vegan Ginger Molasses, Peanut Butter with Cap'n Crunch, Pumpkin Pie, Double Chocolate Sea Salt. The book includes suggestions for pairings, but I think it's more fun to make up your own, as you can do at their trucks. The combinations are endless, so get baking! —Cory Baldwin 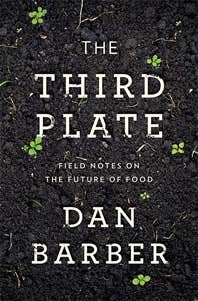 The Third Plate: Field Notes on the Future of FoodSHOP NOW

by Dan Barber
I've enjoyed the bits and pieces of writing by Dan Barber that I've read over the years almost as much as I enjoyed the one unforgettable meal I had at Blue Hill, his restaurant in the West Village. Yet I approached this book with a bit of trepidation. Often, books about sustainability and America's food system are depressing and difficult to get through—but I should have realized I was in better hands. Somewhere in the first section, during a discussion about the structure of soil, I realized that I was completely engrossed. From that point on, it was a fight to read more slowly; I didn't want this book to end. Barber's idea for the future of our food system is a somewhat nebulous vision that involves a shift in the way we eat, farm, and think about food. He advocates moving from the "second plate"—his name for the free-range, farm-to-table, locavore style of consuming that is popular today (the "first plate" being the meat-centric meal we think of as classically American)—to the "third plate", an integrated system based on ways of farming and eating that have been around for centuries. In one particularly fascinating section of the book, he looks at the production of jamón ibérico in the Spanish dehesa. The complex system that produces one of the world's most coveted delicacies is, he points out, two thousand years old—nothing if not sustainable—and creates many delicious by-products. The Third Plate is impeccably researched, well-written, and achieves its aim: to make us reconsider not only what we want to put on our plates, but how it got there in the first place. —Kaylee Hammonds

Available May 20 from Penguin Press HC, $29.95
Buy The Third Plate on Amazon 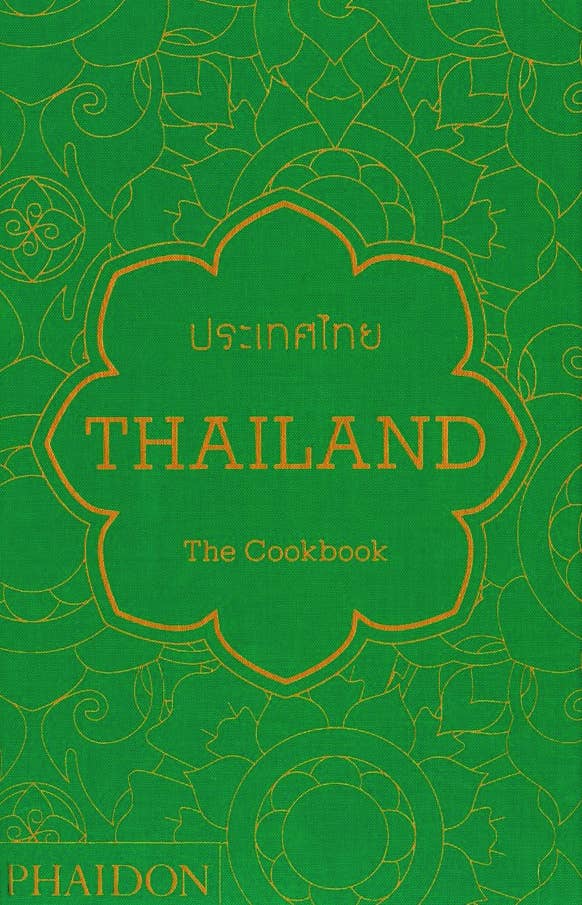 by Jean-Pierre Gabriel
Author and photographer Jean-Pierre Gabriel traveled around Thailand for over 3 years, exploring every region and alleyway, discovering the flavors, the people, and the recipes that make up Thai cuisine. The result is a compilation of over 500 iconic recipes and 200 images in Gabriel's breathtaking book, Thailand: The Cookbook. From spicy pork liver salad to mangosteens in syrup, the recipes capture your attention and draw you in with their authenticity and depth, while the mouthwatering, vibrant photographs transport you to Thailand. Instructions are simple to follow and come out perfectly—fried noodles in coconut milk with shrimp and the spicy stir-fried pork are favorites so far, and I can't wait to eat my way through the rest. —Farideh Sadeghin

Available May 5 from Phaidon Press, $49.95
Buy Thailand: The Cookbook on Amazon 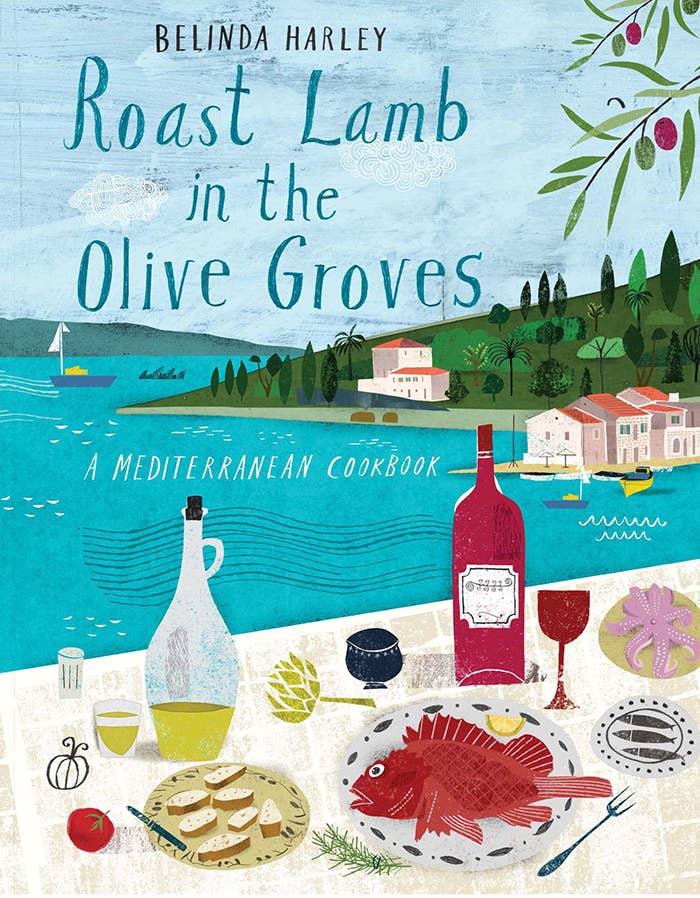 Roast Lamb in the Olive Groves: A Mediterranean CookbookSHOP NOW

by Belinda Harley
As someone who grew up on balmy islands in the Mediterranean, winters in the Northeast are always a shock to my system. This spring is proving no better. My usual escape, sense memories of mountain trails perfumed with wild herbs and a view of cobalt blue sea, is not working, so instead I've curled up with a cookbook: Roast Lamb in the Olive Groves. Belinda Harley, a British journalist known for her writing about artisanal cooking and organic food, has turned a year spent on the Greek island of Paxos into a luminous collection of stories and recipes detailing the simple, ancient methods the islanders have been using for generations. The food is fresh and local by nature, with a unique melding of Greek and Italian flavors and techniques: whole spit-roasted lambs, freshly speared octopus, hortopitas (called "simple weed pies" in the book), and dolmades made from grape leaves picked off kitchen garden vines. It is locavore culture in the truest sense of the word; roaming through the hills gathering bitter greens is no foodie trend on Paxos but rather, a way of life that has carried on for hundreds of years with little variation. My favorite element of the book is the social interaction Harley has with the people of Paxos. She became truly enmeshed in island life and it shows as she shares the locals' legends, gossip, and reverence for their storied past and fears for the future. As I read her vivid recollections of friends gathering on warm summer evenings to share a chilled glass (or two) of local wine, I'm transported away from this chilly, rainy New York spring to that happy place where food and community meet. It's a warmth I can feel. —Laura Grahame

Available May 13 from Hardie Grant Books, $39.95
Buy Roast Lamb In the Olive Groves on Amazon.com 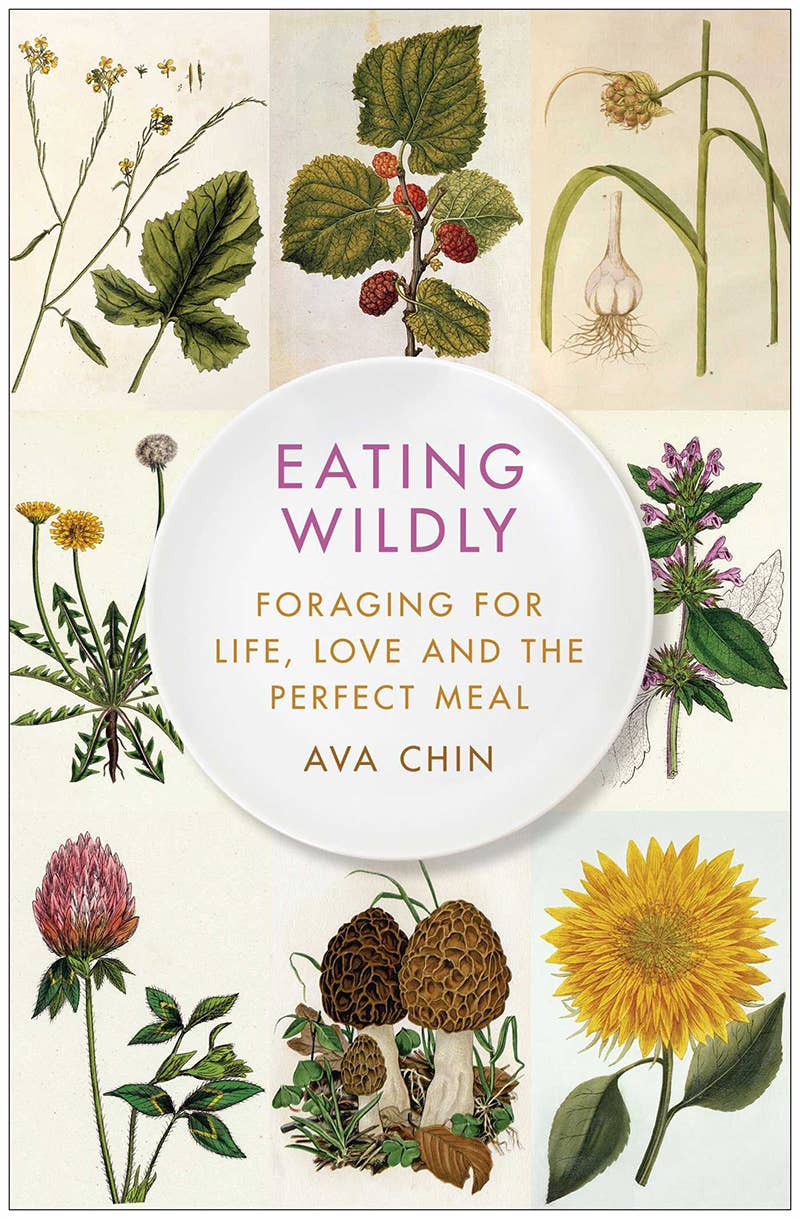 by Ava Chin
Despite growing up in the country, the most foraging I've ever done is plucking figs from a tree whose branches hung down over a public sidewalk. Yet as I paged through Eating Wildly, New York writer Ava Chin's memoir, I found myself imagining the armfuls of morels and wild garlic I'd be cooking with after my next jaunt through Prospect Park. Much like the story she wrote for SAVEUR in issue #138, her book is a touching account of a life spent amidst the flora of New York City, one of the last places you'd imagine could provide a retreat into nature. But for her, hunting for mushrooms, blackberries, dandelions, and other wild produce is a respite from the general messiness of life and a place she returns to again and again when confronted with adversity, whether it's in the form of a difficult breakup or an ailing relative. The book is an entertaining and completely human account of a life, interspersed with recipes for foraged dishes like wild greens pie, field garlic & hummus, and mulberry-balsamic jam. Not only do I feel like I've gotten to know a new friend after reading it, but I'll never look at the park the same way again. —Laura Sant

Available May 13 from Simon & Schuster, $25.00
Buy Eating Wildly on Amazon.com 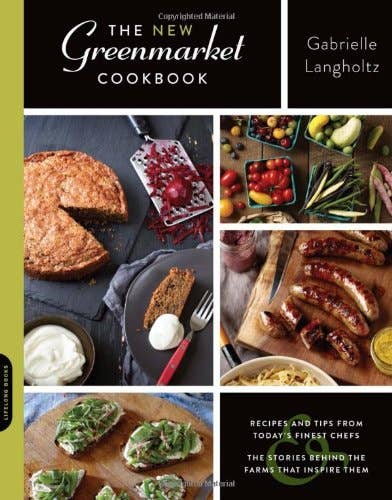 by Gabrielle Langholtz
I was introduced to this love letter to the Greenmarket by SAVEUR's editor-in-chief James Oseland, who wrote the foreward to the book, and like myself, has looked to the market for cooking inspiration since his first days in the city. Written by Gabrielle Langholtz, the book is made up of recipes and stories from chefs, writers, mixologists, and artisans who over the years have done the same, interspersed with profiles on the farmers who make the trek to NYC from upstate New York, Connecticut, Long Island, and beyond. Armed with a whole year's worth of seasonal recipes for their bounty—including Pichet Ong's Lemon Thyme Panna Cotta with Rhubarb Compote and Lemon Thyme Shortbread, April Bloomfield's Fennel Salad with Goat Cheese and Hazelnuts, Michael Anthony's Flat Iron Steak with Freekeh and Peppers, and an apple cider cocktail from Jim Meehan—I'm already planning to increase my weekly market visits to cook all the recipes I've bookmarked. —Cory Baldwin