This is the Lamborghini of Cast Iron Skillets

We're in love with the smart, sleek, and smooth pans from Stargazer Cast Iron 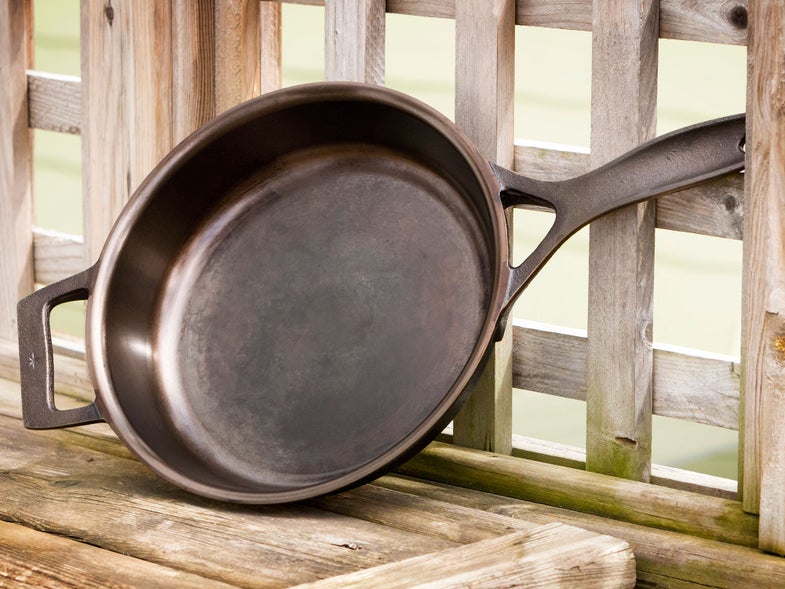 The skillets arrive a beautiful coppery color, lightly seasoned and ready for use, but fresh enough that they'll continue to season and darken as you use them. Stargazer Cast Iron
SHARE

Owning a cast iron skillet can mean committing to a long-term love-hate relationship. For all their charms—steady heat retention, deep dark searing powers, and durability—pans made of cast iron are also insufferably heavy, prone to rusting, and can be downright confusing to clean.

Turns out, their basic, frozen-in-time designs actually aren’t all that well thought out either: stumpy, scorching hot handles; rough cooking surfaces; and what’s with the dysfunctional pour spouts? After collecting and studying vintage and contemporary pans galore, Peter Huntley, a dinnerware industry design veteran, found these repeat quirks and shortcomings enough to drive him to found Stargazer Cast Iron in 2015 with the goal of updating and improving on the classic design.

His first product, a 10½-inch skillet, is about a pound lighter than many of the leading skillets (it’s 5.2 pounds to be exact, and you can actually pick it up one-handed), but still retains heat just as well, allowing for hardcore searing on even the most hulking of proteins. Huntley designed it with a fully flared rim, which allows you to pour out food and liquids from any side, and a smooth finish so the bottom and sides require less oil for nonstick cooking (hello, fried eggs). The skillets also arrive a beautiful coppery color, lightly seasoned and ready for use, but fresh enough that they’ll continue to season and darken as you use them.

But to me, the pan’s greatest charm is its the long forked handle, a simple but genius tweak that means it stays cooler for way longer so you can move it with ease on the stovetop. Of course, all of this raises the price a bit (his skillets run for $80 bare and $88 fully seasoned). But for a pan you’ll keep your whole life, the premium is worth it.

I spoke with Huntley about how he went about designing his growing line at Stargazer, and why we should all relax about our well-loved pans and treat them less like precious, high-maintenance pets.

The skillets arrive a beautiful coppery color, lightly seasoned and ready for use, but fresh enough that they’ll continue to season and darken as you use them. Stargazer Cast Iron

Alright, so why the obsession? What drove you to start collecting cast iron pans and rethinking their design?
I used to work in the dinnerware industry where I did some design and product development in ceramics. I had heard all this buzz about cast iron like everyone else has lately, and I owned some cookbooks that said it was best to make certain recipes in cast iron, so I went shopping for my first pan and wasn’t thrilled with what I found. A lot of them had a rough surface, which turned me off because I thought, “How do you even get that clean?”

Is there a point to that rough surface? Or why do so many cast iron pans have it?
One reason is just pure cost-cutting. For us, the cost of smoothing out that inside surface pretty much doubles the cost of making the pan. The other part of it is that old cast iron wasn’t sold pre-seasoned, but to implement and automate that process today, some of the bigger companies have the pans hang from a hook on a conveyor belt, pass through a spray booth where seasoning gets sprayed on, and then placed in an oven where it gets baked on. The rough surface helps the oil stick, since it would slip right off a smooth surface. That was one of the hurdles for us: on a pan with a smooth surface, the oil has to be pretty much applied by hand to be done right. All of ours here are done by hand.

There’s so much contradictory information out there on ‘the right way’ to season something.
Nonstick cooking benefits aside, a good seasoning will kind of protect the skillet—it’s really about protecting the iron. But people in general get a little too caught up in seasoning. Cast iron has these supposed rules people are worried about, and I think some people end up babying their cast iron more than they need to. The seasoning is an ongoing thing, and people shouldn’t be afraid of what’s going to hurt it and what’s not.

So how do you do yours?
We suggest doing it in the oven because on the stovetop the handle won’t get hot enough to be seasoned. We do it upside down, first at 225°F without oil and then at 475°F using a very thin layer of oil with a high smoke point, to prevent any oil from pooling in the bottom of the pan.

A longer, wider handle that forks where it meets the pan keeps cool during cooking and gives you better gripping power. Stargazer Cast Iron

What else did you change about today’s common skillet models besides the surface texture?
Even on vintage cast iron pans, the handles were generally too short and stubby, and you could only get one hand on there. I found with a pot holder I could barely even get a grip on the helper handle because it was so small. I wanted [handles on both sides] you could grip onto, and since I noticed the old ones I found that were cracked were almost always cracked right at the edge of the handle, I made sure there was plenty of material there and that it could take some abuse.

Our design also keeps the skillet cooler longer. Depending on the type of stovetop and the size of the burner and how long you’re cooking, for the most part it remains cool enough for the bare hand.

The pour spouts were part of the look of cast iron pans, but I don’t know if they are actually that functional, or how much people even pour from them. Even if you do, the liquid will still kind of dribble down the side. So we changed that out for a flared rim, which does a pretty good job of keeping drips under control.

Is it possible to ruin a cast iron pan? Or what are some things you definitely don’t want to do with or to it?
The short answer about ruining a pan: it’s very difficult. People call all the time and are worried about damaging their pans and have all these questions. I reassure them that they’d have to really want to destroy the pan to get it there. In terms of what you cook, just stay away from acids in general, which can strip away some of the seasoning. Definitely don’t cook anything in a wine sauce or tomato sauce right off the bat on the fresh factory seasoning.

I’ve heard of warping happening with electric stoves where people go straight up to the highest setting with a cold pan. That can cause the pan to flex a little bit or the center to raise and the sides to bulge out. But short of cracking the pan—which you’d practically have to drop it from a skyscraper to do—or submerging it for many months in water, in which case the rust would have eaten into it like a shipwreck or something, it’s very, very difficult to destroy a cast iron skillet. Rub it with steel wool if it gets rusty. If it’s lost its seasoning, put a little more seasoning on.