At the risk of sounding like a coffee snob, brewing the perfect cup of coffee in the morning is absolutely crucial. It sets the tone for the rest of my day, and I spend too much money on good coffee beans to grind them in a machine that’s just going to pulverize them into dust and rob me of their precious, complex tasting notes.

Of all the factors that contribute to the final flavor of a cup of coffee, grind size is one of the most important—and, after purchasing your beans, the very first step. For regular, automatic drip machines, you’ll want medium grind. For my preferred brewing method, a pour-over, medium-coarse is best. With most brewing methods, grinding coffee too fine can slow the brewing process and extract mostly bitter flavors—which is fine for something like espresso. But if you want something more complex, with layers of flavor, and a rich mouthfeel (which comes from the natural oils in the roasted beans), a consistent grind is key.

To determine which grinders are the best for precise and adjustable grinds, I used a Kruve Sifter. This device comes with a variety of sieves in different sizes that ensure that the coffee you’re using is all the same coarseness. And though many grinders have set options for grinds—like fine, medium, coarse—they aren’t always accurate. 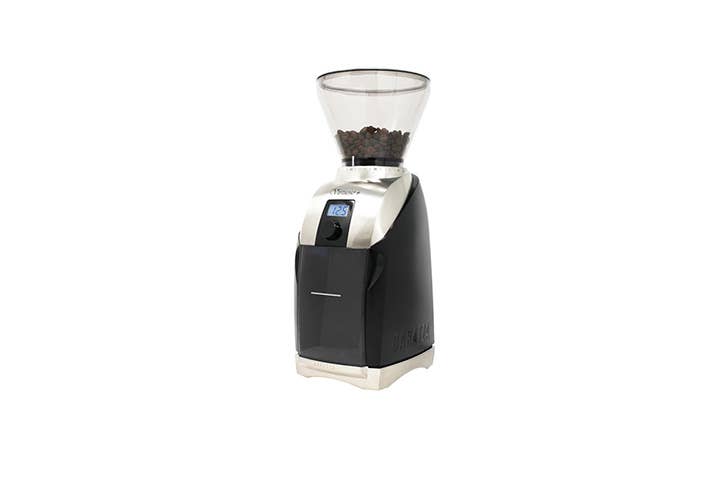 Why we chose it: The Baratza Virtuoso+ is touted by coffee aficionados as one of the best grinders on the market.

The Baratza is consistently chosen among reviewers as the best coffee grinder–heck, even my most discerning coffee friend has one at home. So it was no surprise when this grinder came out on top during testing. Even as I watched it grind, I could tell it was producing the most accurate medium grounds, just based on sight. When I sifted and weighed the grounds, this grinder produced a whopping 90 percent correctly sized grounds–the highest of any of the grinders tested. The hopper holds 8 ounces of beans, though I personally keep my beans in a vacuum-sealed container, so this wasn’t of use to me. The grind size is selected by twisting the hopper, and you can select the grind time with a dial. This is where things might get tricky for novice users. The machine grinds beans at a rate of 2 grams per second, so if you choose to keep your beans in the hopper, you’ll need to do a bit of math to figure out how long to grind based on how many grams you need for your chosen brew method. Of course, this may not be an issue if you make coffee the same way every time–set the machine up once, and then you can just hit start every time you need fresh grounds and let the grinder do the rest.

I love how quickly this machine grinds–it takes about 15 seconds to grind what I need to make my morning carafe of pour-over. The machine is also relatively quiet, which is its own kind of blessing, especially for those early starts when everyone else is still asleep. With the huge range of settings and the consistent grind, this machine is great no matter how you brew your coffee from super-fine espresso to extra coarse for French press and cold brewing. The major drawback on this machine is the price–it’s among the most expensive grinders I tested, but it’s hard to argue with the results. 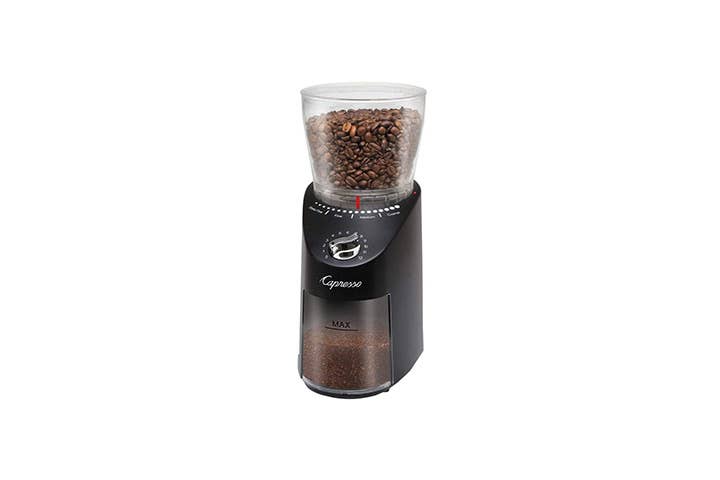 Why we chose it: The Capresso Infinity Plus is one of the highest-rated, best-selling grinders on Amazon.

The Capresso Infinity Plus has one of the highest capacity hoppers of all the machines tested, which is a plus if you like the convenience of having your beans already waiting to be ground in the machine. This machine had a pretty decent ratio of medium grounds at about 70 percent, though not as good as our Best Overall pick. Of the three winning grinders, this was the loudest, but that wasn’t a dealbreaker for us. The interface is pretty simple with just 16 grind settings, but the timing mechanism is a bit more intuitive than our Best Overall pick–you simply select the number of cups you’re brewing and the machine grinds exactly what you need. Between the price and the intuitive controls and settings, the Capresso Infinity Plus is a great value, especially for beginners. 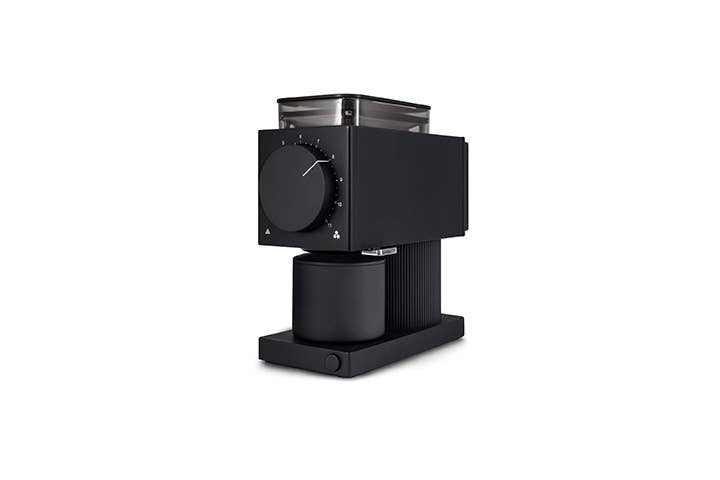 Why we chose it: While Fellow is a relatively new company, they’ve made their mark in the coffee industry with high quality, stylish products.

Look, I just really love the Fellow aesthetic. Clean lines, black matte finish, minimalist design–this grinder is gorgeous. The grind is as consistent as our winning pick at 90 percent medium grounds, but I wouldn’t recommend this for folks wanting to make espresso–it tends to struggle with finer grinds, which might be a dealbreaker for some. I tend to need coarser grinds since I typically brew pour-over and cold brew, and the occasional batch of drip coffee. Users favoring the convenience of a high-capacity bean storage hopper will also be disappointed here–the machine is designed for folks who favor grinding exactly what they need from fresh beans every time. So, if you’re like me and prefer storing your beans in an airtight vacuum-sealed container for optimum freshness and flavor, this is the machine for you. At a whopping 13 pounds, you’ll want to keep this grinder in one spot since it’s a bit cumbersome to move around. Why so heavy? The folks at Fellow packed this machine with sound dampeners, making it the quietest grinder I’ve ever used. This was also the most expensive grinder I tested, and the features that add to its cost may not be dealbreakers for everyone, but I highly recommend the Fellow Ode to folks who are really finicky with their coffee and appreciate the aesthetics. 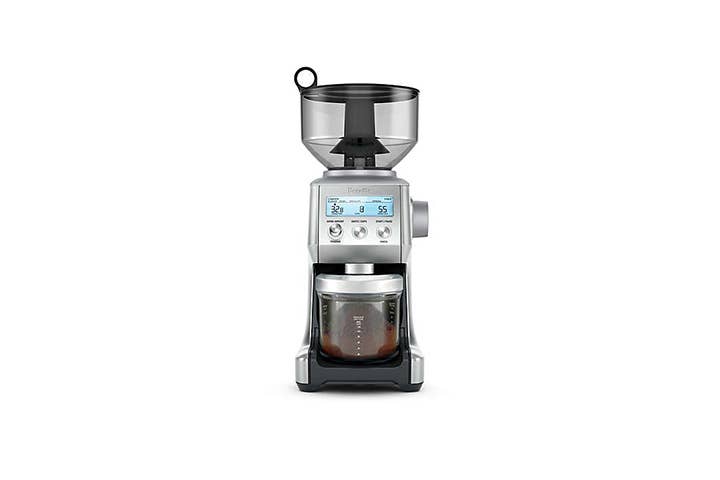 This is a pretty decent grinder and might have been one of my top picks if it could grind a bit more consistently. It performed better than our Best Value pick at a ratio of about 74 percent medium grounds, but it struggled with coarser grinds. The digital interface was among the most intuitive of all of the grinders tested, so I would definitely recommend this machine to beginners who are willing to splurge a little. The Breville grinder also had the largest bean storage of all the machines tested with a capacity of 18 ounces. Like the winning grinders, the Breville Smart Grinder Pro comes with a one-year warranty. 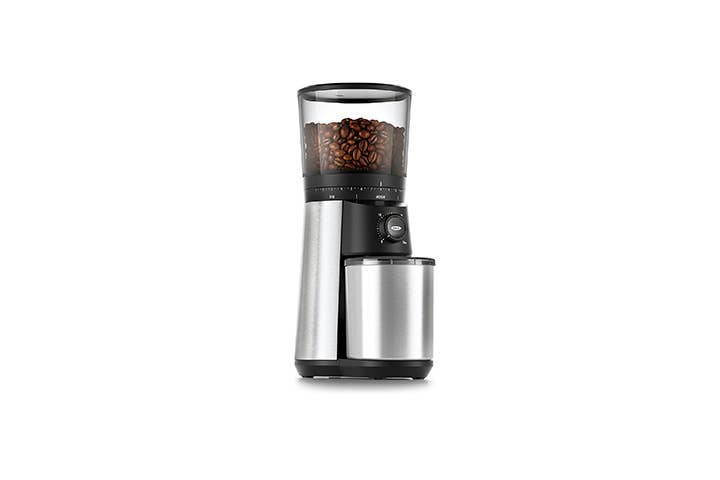 I really wanted to like this machine, especially the model with an integrated scale. The model with the scale had the highest capacity bean storage hopper, large enough to hold a whole pound of beans, a grind selector that lets you choose between grams, cups, and a manual mode. However, I found that the scale wasn’t terribly accurate when I was weighing the grounds before sifting to see the ratio of medium to fine particles. The regular model without a scale holds 12 ounces of beans. Both grinders were consistently able to grind at a ratio of 75 percent medium grounds to fine particles. However, both were also the messiest of all the machines I tested and would shoot grounds all over the counter during grinding, which I had hoped was user error. Unfortunately, upon checking the machine and looking at other reviews, this is a common issue with these grinders. Both models of OXO grinder come with a two-year warranty, which was the best of all the grinders tested.

We chose these coffee grinders based on recommendations from coffee aficionados and fellow professionals, personal experience, and from testing through Amazon best-seller lists.

After cleaning and setting up each machine based on the manufacturer’s instructions, I used each machine to grind enough coffee beans for a single cup of pour over coffee (25 grams). I then weighed the grounds on a kitchen scale to check the final weight, then sifted them using a Kruve Coffee Sifter and guide to verify the grind size. I weighed the medium-sized grounds and compared this to the total weight to determine the ratio of medium grounds to fine particles. Two of the winning machines were able to consistently grind at a ratio of 90 percent medium grounds to 10 percent fine particles. This was the biggest factor in determining the winners, but consideration was also given to things like noise, size and weight of the machine, grind settings, and cost. I repeated the process multiple times with each machine, grinding about 3/4 pound of coffee per machine and averaging the results. Since drip coffee is one of the most common brewing methods, I mostly looked for machines that consistently produced medium grounds, but consideration was also given to machines that could consistently grind well on other settings.

It was surprising to see the range of weights between all of the machines, from 4 pounds on the low end to 13 pounds on the high end. I was also surprised to find that the lighter the grinder, the louder it seemed to be, while the heavier grinders were the quietest.

Having lots of grind settings is great if you plan on using different brew methods, from espresso to French press to drip. However, it’s important that each grinder be able to accurately and consistently produce grounds that match those settings.

Coffee grinders need to be cleaned regularly to prevent grounds from clogging up the burrs. I typically clean mine once with the included brush every couple of months, and this process should be as simple as possible.

Nobody wants a rude awakening from a super loud coffee grinder in the morning–that’s what the caffeine is supposed to be for, right? We looked for machines that ground the coffee quickly and quietly.

Q: What is the difference between a blade grinder and a burr grinder?

A blade grinder works similarly to a blender–it has whirling blades that essentially chop the coffee beans. Burr grinders have two gear-like mechanisms that crush the beans at various widths to allow specific grind sizes. Blade grinders are much less accurate, while burr grinders tend to produce a more consistent grind.

Q: What grind size should be used for regular drip coffee?

Medium is the most recommended grind size for drip coffee machines. The grounds should be roughly the coarseness and texture of sea salt.

Q: How long does a coffee grinder last on average?

It mostly depends on how much coffee you grind in a week. On average, with regular cleaning and maintenance, a coffee grinder with steel burrs should be able to grind about 500 pounds of coffee before the burrs need to be replaced. If you grind about a pound of coffee a week, that’s just about 10 years of grinding!

If you’re a gigantic coffee nerd like me—as in, meticulously weighing beans and water, heating to a precise temperature, and engaging in the twee ritual of making pour-over every morning—you’re going to want a consistent-grinding power house like the Baratza Virtuoso+ or the Fellow Ode. If you’re a little more casual about your coffee, though, the Capresso Infinity Plus will absolutely do the trick. Whatever your caffeine routine is, you can’t go wrong with any of our top picks.