The following is a modified excerpt from Jeff Koehler's Where the Wild Coffee Grows: The Untold Story of Coffee from the Cloud Forests of Ethiopia to Your Cup, which is on sale as of today.

At the counter of a stylish, independent coffeehouse on Seattle’s Capital Hill this summer, I mulled over the options for “personalizing” a morning latte. 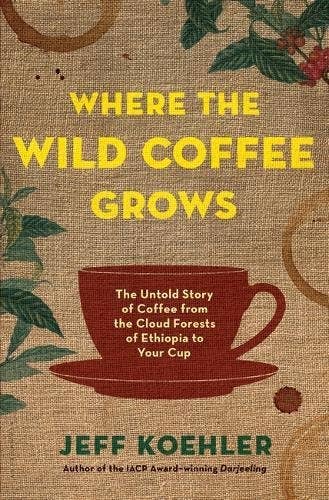 There were three sizes, three kinds of milk plus another four lactose-free alternatives (soy, almond, coconut, and, being Seattle, hemp), and three strengths from extra shots. If my math is correct, that’s 63 ways I could have ordered my drink. As well, the café offered 20 flavors to squirt into the coffee, a cold option over ice, and three varieties of roasted beans to chose from. Theoretically, there were actually thousands of unique ways to have my latte.

The menu was not exceptional. Nor was the fact that the majority of the customers ordered their coffee to go. Almost everyone else sat alone (including me).

Coffee drinking in America is largely an individual experience, with cups tailored to taste and enjoyed solo.

Not so in Ethiopia, the home of Arabica coffee, as I learned while working on a book about the beans' origins, Where the Wild Coffee Grows.

Some Ethiopians might add a bit of sugar (or honey) or salt, or even a dollop of butter, but there is a single version of the drink brewed in a bulbous terra cotta coffeepot called a jebena over charcoal, poured into identical handle-less demitasse cups, and served to everyone. Outside of certain city cafés with espresso machines, there are no options on sizes and or with milk.

Even more important, I learned that coffee is never drunk alone.

Drinking buna remains a communal rather than solitary activity. The common phrase for getting together, to talk, is buna tetu, which literally translates to "drinking coffee." This captures both aspects of its significance: a meeting rarely lacks coffee, and coffee rarely lacks company.

Ethiopia is one of the world’s largest producers of coffee. Yet it exports less than half of what it grows. To put that another way, it consumes more than half its own production. That’s around 500 million pounds of coffee for a population of nearly 100 million, a particularly impressive quantity as nearly half the population is under 14 years of age. (By contrast, Kenya consumes just three percent of its production, while Colombia exports over 86 percent of its coffee.)

Coffee is not just the national drink but its staple. Buna dabo naw goes a popular expression: “Coffee is our bread.”

Interwoven in the country’s distinctive fabric, coffee is an incomparable strand in Ethiopian life. “It is so much part of the culture,” wrote the social anthropologist Alula Pankhurst, “that it is a symbol of sociability, a metaphor for social relations and a vehicle for spiritual blessings.” It is everywhere, seemingly all the time.

Nowhere is that more true than in the southwestern region of Kafa where Arabica grows wild in the montane cloud forests.

Coffee has long been central to Kafa’s culture, and it retains unparalleled importance on numerous levels today. “People,” Mesfin Tekle, the leading local expert on Kafa and its coffee forests, said, “consider coffee is their identity.”

Kafa is officially a “zone” within Ethiopia’s Southern Nations, Nationalities and Peoples’ Region, a large state and one of the most culturally and linguistically diverse areas in Africa. Kafa measures some 4,250 square miles, a bit smaller than Connecticut, with an overwhelmingly rural population of 850,000. (Its capital, Bonga, by far Kafa’s largest city, is home to just 27,000 people.)

Kafa’s isolated highlands are a mosaic of deep valleys, dense forests, and hamlets of subsistence farmers. Nearly every home is surrounded by enset trees and a garden of field peas, fava and haricot beans, cabbage, and onions. Those living around the forest gather long pepper, dig for pods of wild cardamom, and hang rudimentary cylindrical hives high in trees for honey to make murky, home-fermented tej (mead).

Coffee, though, is the cash crop. Eighty-five percent of Kafa’s people rely directly or indirectly on coffee for their livelihood, including those living in Kafa’s boggy lowlands, according to Mesfin. In the highlands, where Arabica grows naturally, it is close to 100 percent.

Locals forage for it in the wild and grow it in their gardens, buy it, sell it, hoard it until prices go up, and, in the meantime, drink numerous cups of it a day. Even toddlers sip the drink. “When kids start walking, talking, and touching everything, they simultaneously start taking sips of coffee,” as one Kafa resident put it.

“I cannot have more than three cups of coffee,” Mesfin joked one afternoon in Bonga. “But the rural people can have eight or nine cups in one day”—two or three times at home, and the remainder with friends in their homes.

Indeed, every invitation includes coffee. “If coffee is not part of an invitation,” one Kafa author counsels, “it is said that the invitation is incomplete.”

But even that is not needed.

If you smell coffee being prepared, there is nothing strange about simply walking inside for a cup, Mesfin had told me during my first trip to Kafa. There will always be extra coffee and plenty of cups on the low table. “You don’t need to feel ashamed or embarrassed. You go into the house and they will serve you coffee.”

You won’t be able to “personalize” the drink, though. Don’t bother asking for decaf or expect a small pitcher of hemp milk to add. (Anyway, the tiny cups will filled to the brim.)

But there’ll always be enough for one more cup of coffee, a stool, and likely some snacks. (Savory not sweet: popcorn and puffed barley are traditional coffee companions.) Have a seat, take a small cup of buna in the palm of your hand, and join the conversation.

Reprinted with permission from Where the Wild Coffee Grows: The Untold Story of Coffee from the Cloud Forests of Ethiopia to Your Cup. Copyright © 2017 by Jeff Koehler, published by Bloomsbury USA.