How to Temper Chocolate

How and Why to Temper Chocolate

When it's all too much, and humanity is rounding the corner toward irredeemability, I think of the cacao bean. Somewhere between now and a billion years ago, some hairy visionary gazed upon this bitter, homely fruit and foresaw a Snickers.

It's a chilly night in San Francisco and I'm being coached at seeing even further, beyond Mars. My instructor is Todd Masonis, the jovial co-founder of small-batch chocolate factory Dandelion Chocolate and a luminary in the emergent bean-to-bar movement of confectioners who don't just make treats, but create chocolate itself from scratch. Over the next three hours I will learn how to roast, crack, sort, winnow, and grind humble beans into a superior, post-industrial hunk of chocolate. All my life, chocolate has essentially been an MRE, but it turns out I can make it myself, get involved on the ground floor, understand that ground floor, and tweak it as I please. Imagine learning you could build your own car. It's like that, except edible.

Masonis and I are at the back of Dandelion HQ, and along one wall are burlap sacks marked Belize, Liberia, Madagascar, and so on, filled with beans. They are not interchangeable: Instead of using additives and strange, unpronounceable ingredients to alter the flavor of his chocolate, Masonis relies on the distinct taste of the beans—ones from a shady spot in the Caribbean or a nifty farm that does something cool with acidity—to provide variety.

I opt for a kilo from the Dominican Republic bag in the corner—it has traces of peanut and honey and cherry, I'm told. At some point, farmers in the country's Cibao region macheted shiny, football-like pods from a tree, extracted the beans, and then dried them, a process that happens simply on the hot road in some countries. (Notes of asphalt, Masonis cautions.) The beans are then sold to a fermentary, where yeast feasts on sugar in the fruit to create alcohol, and bacteria eats the alcohol to create acid, and the acid penetrates the bean to create its unique flavor, which I shall now coax forth.

Masonis is a recovering techie, having traded the (wildly successful) start-up life for some magic beans and a certainty that chocolate can be improved in this country. A few years ago, a civilian with such designs would've been laughable—as was once true for winemakers, coffee brewers, and microbrew masters, he points out. Today an aspiring chocolate maker needs only an oven, a hair dryer, and a bean grinder called a melanger to blow away sweet-toothed loved ones at holiday time. Okay, a melanger will set you back $200. But it's great for making Indian idli and dosa batters, which require rice and dal to be crushed just so, as well as nut butters, marzipan, tahini, and anything else that benefits from a smooth grind and a little warmth. And compared with the millions you once needed to be your own Wonka, it practically pays for itself. (Or, you know, you sort of forget about the $200 after a while.)

Hair-netted and eagle-eyed, Masonis and I pore over a tray of beans, removing any that look uncool—broken, moldy, fungusy. Because a Dandelion chocolate bar comprises only beans and sugar—no extra fat, no emulsifiers that often give chocolate bars their smoothness but butt the purity of flavor—perfect fruit is key. Check out the braininess, Masonis says, splitting one with a special bean guillotine. Tiny fermentation-formed rivulets carve up the inside. The braininess is good.

Masonis wasn't always like this. As a kid he loved Hershey's, like everyone. But once you experience the good stuff, he says, you realize chocolate can have more flavor complexity than wine or coffee. We knew this once, but that knowledge vanished with industrial uniformity and scale. Now it's being found again.

Ordinary humans can roast their beans in the oven. Humans-turned-chocolate-professionals use a hacked coffee roaster and discuss things like crystal structure while they wait. We set it for 18 minutes but rely on our noses: These unappetizing pellets somehow start smelling like brownies. From there we need only crack them open, remove the shells, and winnow away any fibrous husks to reveal the pure, shiny bits of bean known as nibs.

After we weigh some variables—and I pretend to understand those variables—Masonis and I agree on a 70–30 chocolate-sugar ratio. (Some beans stand on their own better than others. But really, the ratio is just a pathway to personalized experimentation.) Into the melanger go both ingredients. What looked like clumps of mud five minutes ago now looks encouragingly like peanut butter. It will churn all night and in the morning I'll come fetch a container of actual, actual, actual liquid chocolate, which I'll be able to cool and make into bars, use as a dip, or mix with hot milk for the most sublime hot chocolate in the land. 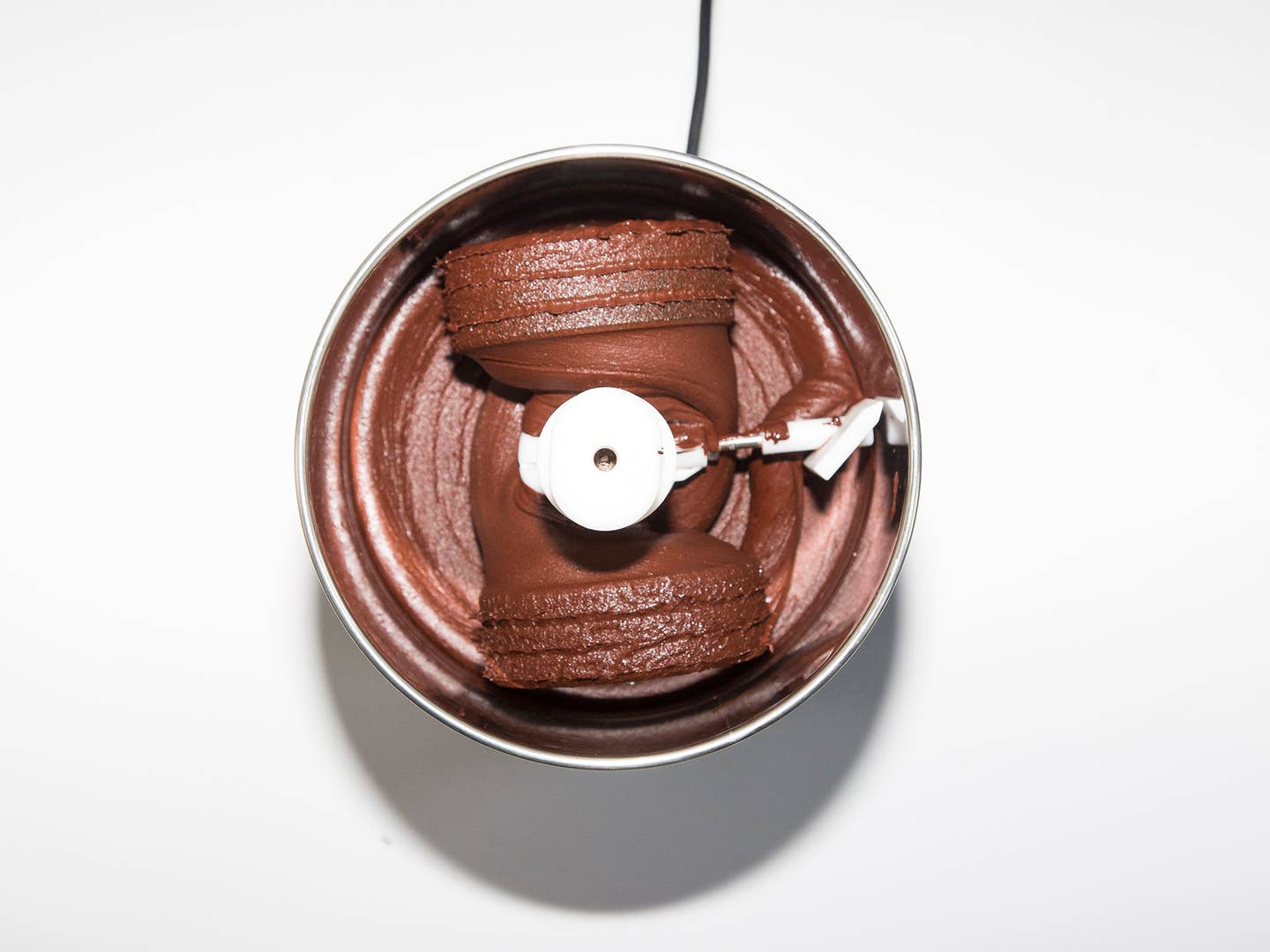 Why You Need a Chocolate MelangerSHOP NOW

The thing about grating limes is, don't grate your knuckles,” I tell my six-year-old, Cora. She grates her knuckles. We rummage, find a Band-Aid. Two minutes later she's grating again, and I'm rigging a makeshift double boiler.

It's a Sunday morning and we are gilding all those chocolate lilies I brought home. Cora and I are low-brow—give us M&Ms—but today, we'll dip dried mango pieces in the melted chocolate, and dried banana, and pretzels, and a basil leaf, and one of Cora's chewable vitamins (science!). We'll sprinkle it with grated lime and roll it in coconut. We'll experiment with chile powder and turbinado sugar, and when that voice rises up—can't we just eat the chocolate plain?—we'll squelch it and dunk our ingredients with Cora's novelty training chopsticks, which have a diplodocus on top. Then everything goes on a tray to chill in the refrigerator until it sets.

During my brief apprenticeship at Dandelion, I asked Masonis why chocolate has such a hold on people. On the Monday night I was there, the customers who were streaming in looked not just happy but rabid.

"I think chocolate is romantic for people, and maybe there's an element of childhood nostalgia, too," he told me. "Also: theobromine"—chocolate's most potent chemical compound.

Hey, whatever works. Some hours after our dipping spree, Cora and I creep to the fridge and slide out our trays. Pasta, salad, pie: These things people make in their homes. Chocolate? Chocolate comes in a wrapper on a shelf. And yet. The confections we've made are delicious and nuanced, sweet but not too sweet—and real, that great hallmark of food. Next time, maybe I'll try fruitier beans, see what less sugar tastes like, maybe roast for an extra minute. For a food with two ingredients, the customization options are entertainingly endless. But for now, on this maiden voyage, even our screwy ones look excellent. And all of this started as joyless little beans.

“When I was in the software world, nobody ever came in and said, ‘I love software!’” Masonis told me. “But chocolate? It just makes people happy.”

To buy beans from around the world, visit chocolatealchemy.com, where whole beans, raw or roasted, are availalble by the pound starting at about $10.

Next, find out how (and why) to temper chocolate »
Get the recipe for Homemade Chocolate Bark »
See Todd Masonis make chocolate from scratch »