It’s the Summer of Melon Cocktails

And we've got two recipes to prove it 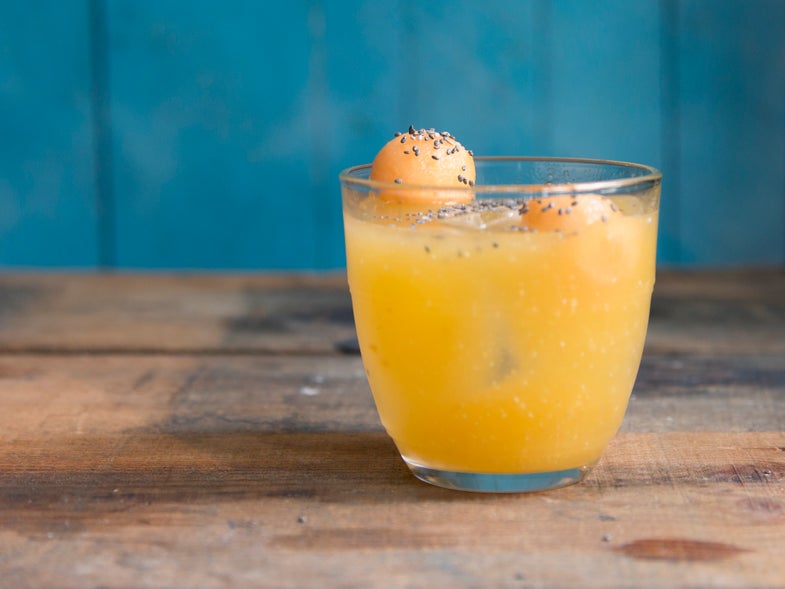 Tequila, agave nectar, and cantaloupe purée get shaken up in this summery cocktail from Houston's The Pastry War. Get the recipe for Bala de Canon ». Matt Taylor-Gross
SHARE

Watermelon has enjoyed renewed popularity in cocktails, especially mixed with smoky mezcal in a play on barbecue flavors, as of late. But now two other melons—cantaloupe and honeydew, those stars of breakfast buffets everywhere—are taking off on bar menus too. Many of the melon drinks are bright and juicy as you might expect. The mint-plumed Starbuck Swizzle at the Franklin Mortgage & Investment Co. in Philadelphia, features a mixture of honeydew, lime, and pineapple juices to sweeten and brighten the boozy base of gin, Green Chartreuse, and Bonal, a French aperitif wine. In the Nuke Laloosh at Indianpolis’s Black Market, cantaloupe juice is paired with rum, Yellow Chartreuse, and a splash of white balsamic vinegar. Sweet cantaloupe and honeydew are natural partners with tequila. At Houston’s The Pastry War, cantaloupe puree is mixed with Tequila Cabeza and lemon juice, and garnished with melon balls and chia seeds in the the Bala de Canon. For the Calavera Catrina at The Lucky Liquor Co. in Edinburgh, chunks of cantaloupe are shaken with Ocho reposado tequila, Cointreau, orgeat, and lime juice.

Bartenders are also going beyond melon chunks and juice, making shrubs, infusions, and syrups from the sweet fruit. At the Sacramento’s bar-barbershop hybrid Bottle & Bartlow, a honeydew-cucumber shrub enlivens a sprightly mix of gin, lemon, and prosecco. Gin is infused with honeydew and melon at New York’s Dead Rabbit Grocery and Grog and then mixed with dry vermouth, and a touch of falernum syrup, for a melon martini. At Atlanta’s Holeman and Finch Public House, the gin-based Fabulous Moolah sweetens a mix of lemon, Avezè (a French aperitif made from gentian), and lemon bitters with honeydew melon syrup. And at the Broken Shaker in Chicago, honeydew melon is used in homemade tonic syrup for the seasonal Gin & Tonic.