If you’re a beer enthusiast—and judging from the fact that you’re reading this, we’re betting that’s likely—you’re clued into the craft brew scene that’s swept across the U.S. in recent years. But since you can’t be in two places (or more) at once, a beer subscription box is a convenient and exciting way to taste old favorites and new releases, no road tripping (or standing in line) required.

“The appeal of beer subscription boxes has to be the ease of shopping for good craft beer without leaving the confines of home,” shares Scott Peluso, the creative behind Instagram account Lorenzo the Beer Cat. “Plus, it allows customers to purchase beer that may not be readily available to them in their current market or location.”

And Geriz Ramirez, general manager of Other Half Brewing Co. in Brooklyn, New York, agrees that subscriptions are a great way to discover the latest breweries that keep popping up. So, whether you’re looking to expand your access to small-batch brews, or you’re just starting out as a craft connoisseur, we’ve rounded up five beer subscription boxes, plus one focused just on cider, worth trying.

A Few Things to Consider

For beer boxes, there are often two main options: customizable or curated. With Tavour, for instance, you can toggle between both, electing to either build your own box with what’s available, or opting to let the company make picks for you based on what you already love. “In my opinion, a craft beer subscription box should have a great mix of styles from lagers to stouts and sours to IPAs,” says Ramirez. But customization doesn’t have to stop at hand-picked beer—you’ll also want to consider how often you’re up to receiving shipments (once a month or every other month?) or how many cans and bottles per box (popular memberships offer 8- to 12-packs, though this may impact cost).

The main appeal of a beer subscription box is proper packing and shipping. One of the biggest complaints that Ramirez hears from other beer enthusiasts is that when their product arrived, it was either warm or damaged. “Many companies use courier services that take a few days to arrive; as beer is a perishable item, properly packaging the beer and prompt delivery have to be a priority,” he notes. In an ideal world, Ramirez adds, you should go with a service that safely ships with ice packs, and within a two-day delivery window.

The benefit of signing up for a monthly subscription, explains Ramirez, is the fact that you often have the opportunity to press pause (whether the upcoming box features something you don’t want, or if you simply need a break). “This way, they are not sitting at home with month-old beer that they haven’t tried yet,” he contends. Plus, beer journalist and ​​founder of the Diverse Beer Writers Initiative Beth Demmon notes it can be expensive for all parties if you aren’t taking advantage of each box. “Shipping multiple bottles or cans of anything can get very costly for smaller producers,” she says. 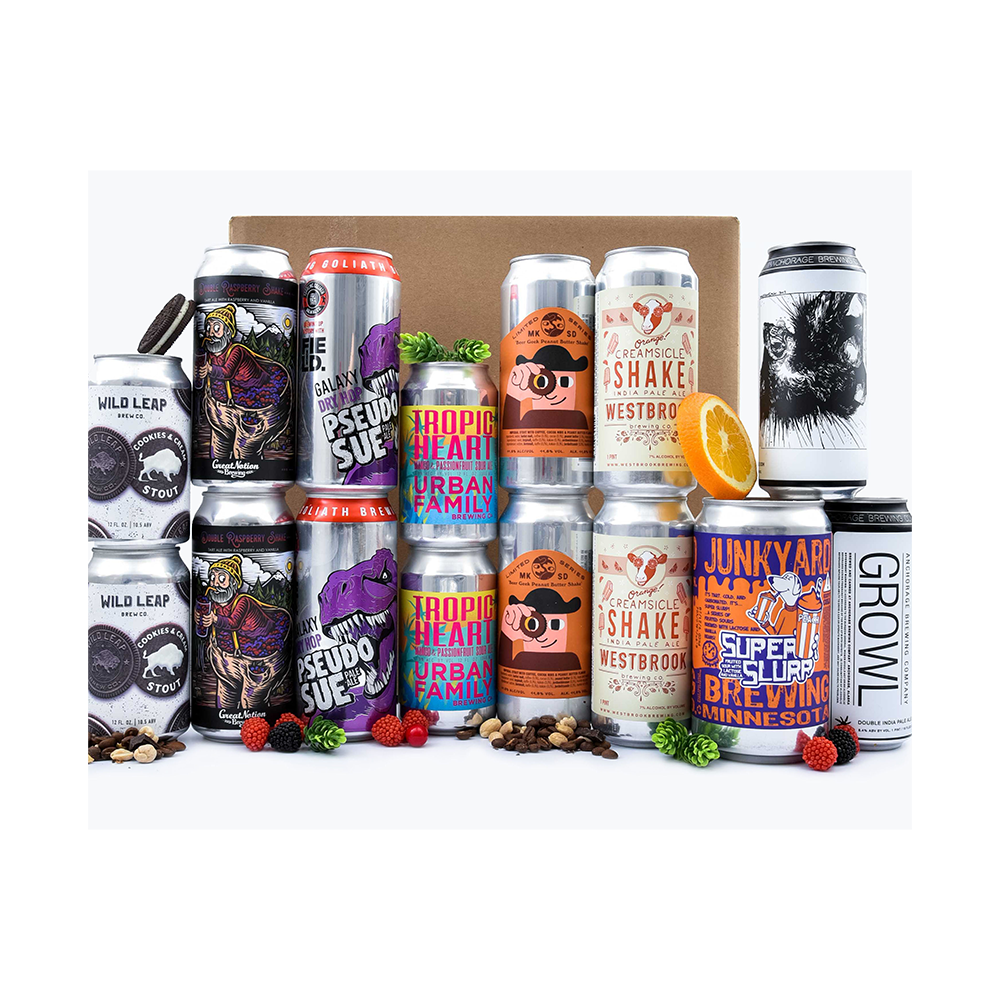 Tavour is one of the most popular beer subscription boxes on the market today for its sheer variety, which is exactly what Peluso says he's seeking from this service: The convenience of trying a broader spectrum of beer styles at home. “As far as Tavour goes, they reward frequent customers with access to hard-to-find, rarer craft beers that they procure and that very few people can actually acquire,” notes Peluso, pointing out Anchorage Brewing’s A Deal With The Devil, a wax-dipped, small-batch barleywine that was added on in 2020 with a score of 100 on Beer Advocate. The Seattle-based company has gained a substantial following over the past few years, especially during the pandemic, thanks to its variety and customization. All you have to do is download the app and fill your box with as many bottles or cans that you want (or are willing to pay for) and it will ship at the end of each month. The app will also alert you when new breweries or beers are added. 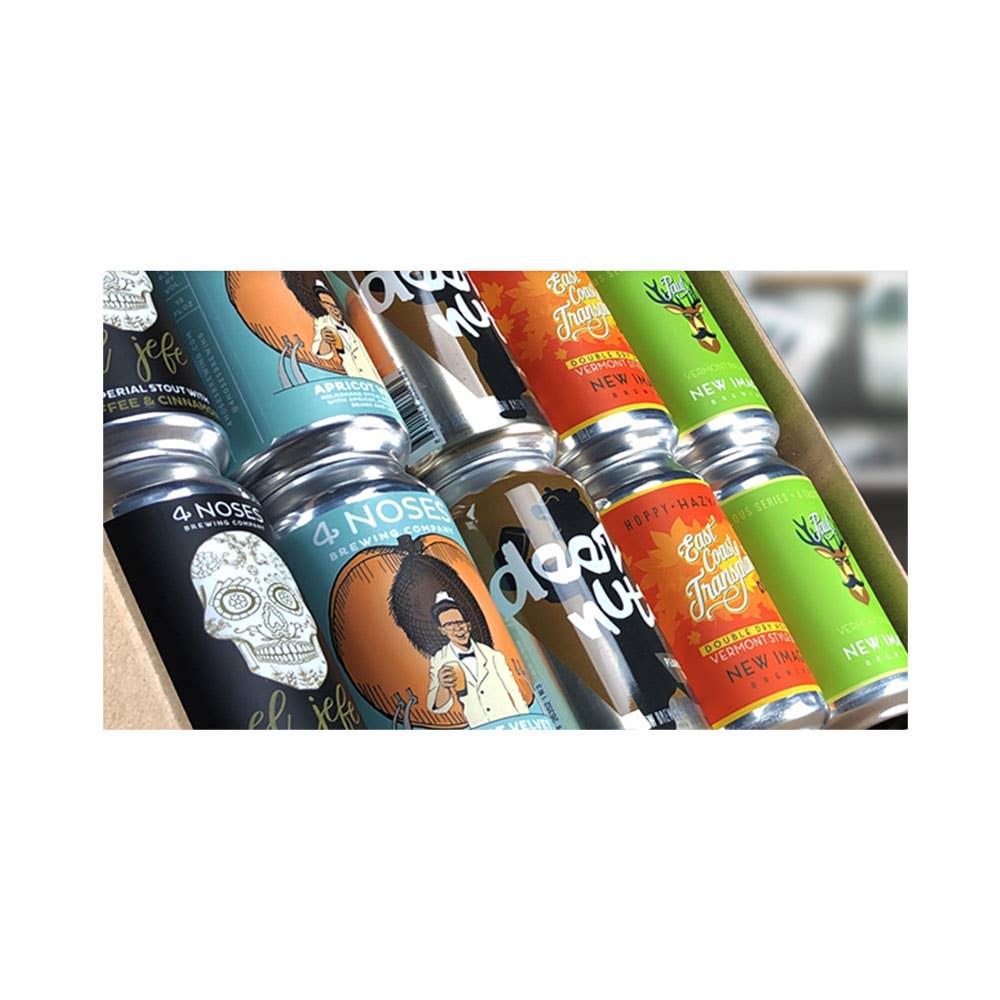 Starting at just $4 per drink and $5 flat shipping, the Beer Drop is a monthly subscription (though one-off orders are also allowed) featuring award-winning microbreweries in Colorado that sends a mix of five different styles and 10 cans total. In fact, that’s how the whole thing starts—fill out your flavor profile and the Beer Drop will customize an individual order just for you (though rest assured you can change up the final selections at the end before a shipment is sent). Flexibility also comes in the form of being able to modify, skip, or cancel at any time, though the regularly rotating monthly selection of new small-batch options will likely keep you hooked. 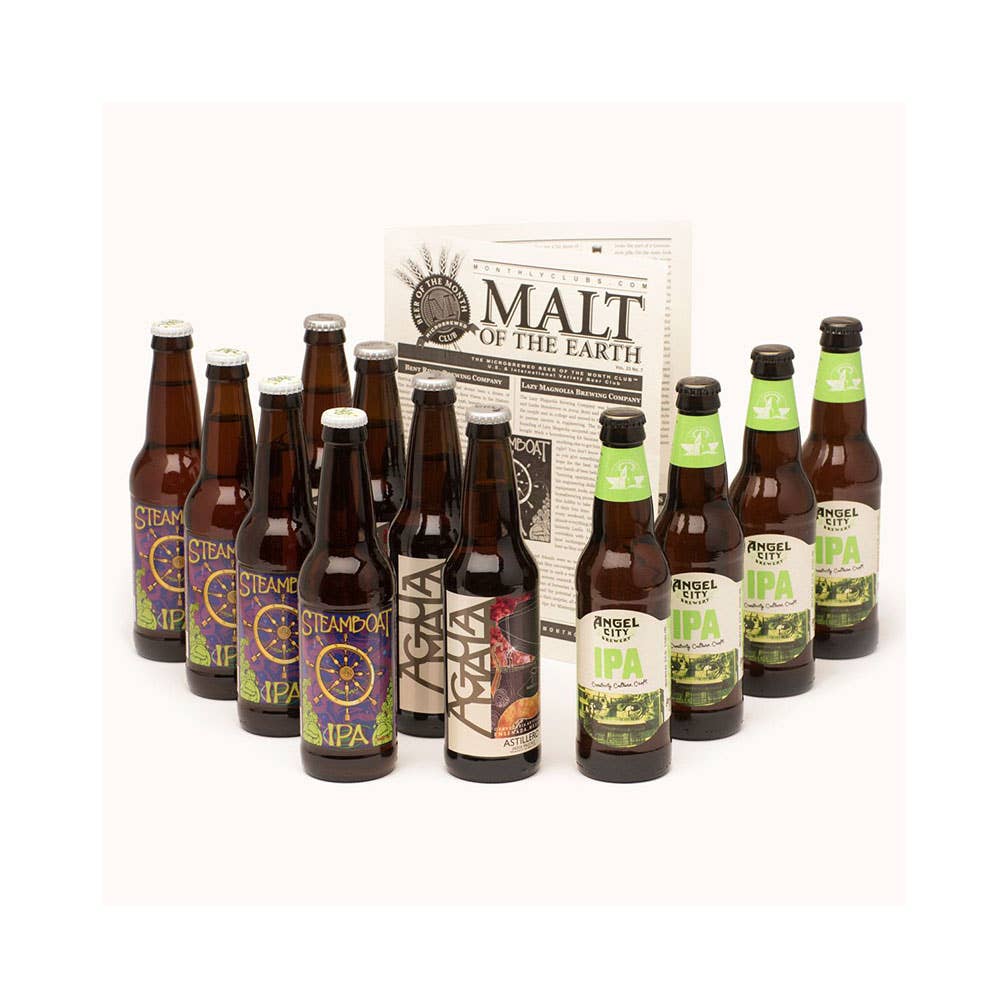 For those head over heels in love with haze, the Hop-Heads Beer Club delivers twelve, 12-ounce IPAs in every shipment. We’re talking everything from doubles to sessions and other hop-forward styles, like pales and red ales, too—and not just from the U.S., but all over the world (making it the only one on this list that sources globally). Beer of the Month Club, which first started shipping beers in 1994, created this special subscription for those who can’t get enough bitter, hoppy beers, especially when it comes to experimental and rare finds. (If you’re really feeling adventurous, going through the Beer of the Month Club means you can combine up to five unique clubs into one membership.) Choose between a monthly, every other month, or quarterly membership that can be paid for in full from the start or per shipment. And rest assured that the selection process is rather rigorous: Being in the business for 25 years means a tasting panel of brewmasters with a collective 100 years of experience in the industry. 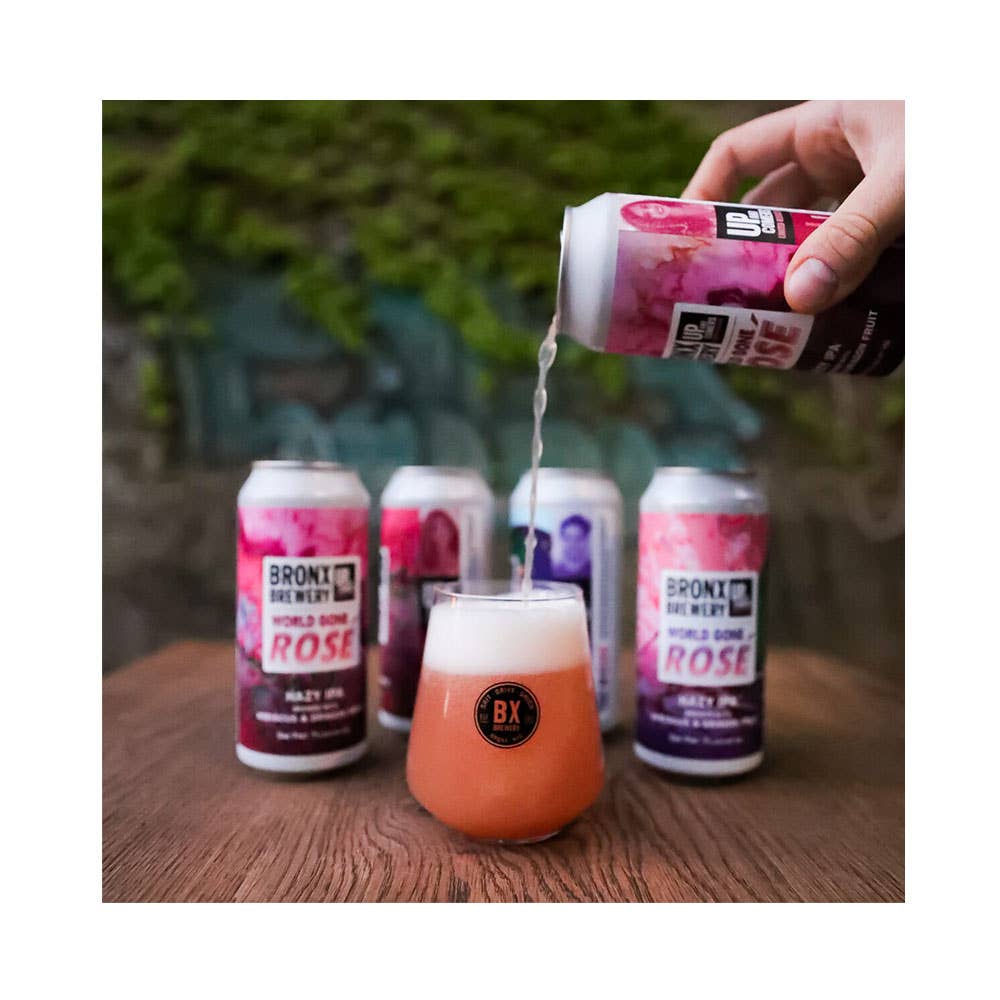 Sometimes, a subscription box may be the best way to secure a limited release or once-in-a-lifetime cans. In response to the pandemic, The Bronx Brewery in New York City started offering their own take on memberships. While they've always offered the option to pick-up on location, it saw an opportunity in shipping cans (for $15 extra) beyond the five boroughs and across the whole state. So, if you’re lucky enough to live in New York and love surprises, this box is a must. No matter if you choose between the 4-, 8-, 12-, or 24-pack, each delivery includes new releases, or what the brewery calls its “Up and Comers”. Every Up and Comers can features the artwork of a local artist, and other benefits of subscribing include first access at merchandise drops, virtual tastings, and discounts on products and events. But maybe the best part is knowing that purchases are giving back to the local community. “In March and April we did a beer called Bollywood in the Bronx—it was mango-lassi flavored—and some of the proceeds went to a non-profit called SapnaNYC,” explains Brooke Keene, e-commerce director (SapnaNYC serves low-income South Asian immigrant women). Not located in the Empire State? There are a number of other breweries that do the same, and all it takes is a call to ask. For example, Ramirez is an annual partaker of Horus Aged Ales and Side Project Brewing for access to bottles before public sales. 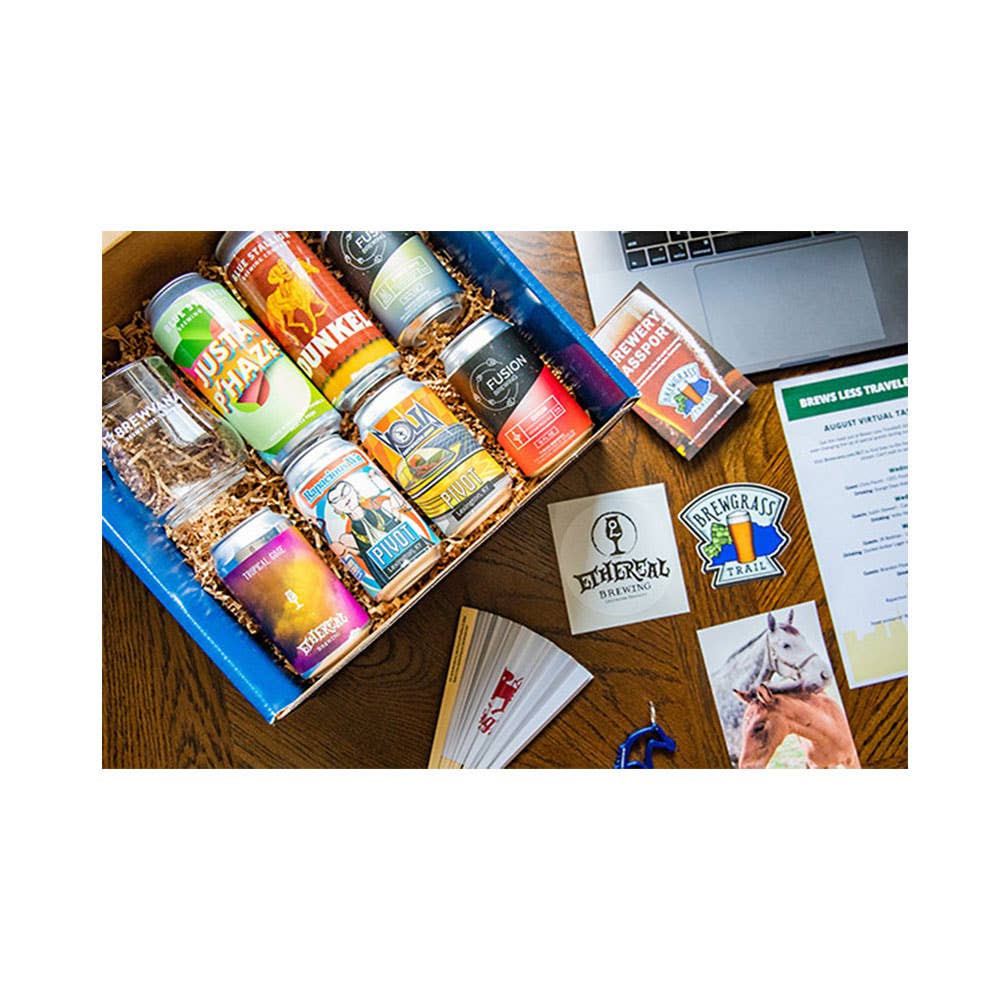 If you’re into collectibles and all kinds of goodies, you should sign up for Brewvana’s Brews Less Traveled Beer Club, or the virtual equivalent of a tasting tagalong. The club features a different city in the U.S. every month, showcasing six styles from at least four eclectic breweries, and comes with limited-edition barware and surprise souvenirs (past boxes have included snacks and koozies). Brewvana hosts a virtual tasting every week with the featured cans or bottles, but they also have a podcast in case the 8:30 p.m. EDT time doesn’t work with your schedule. For $20 more, you can get double the amount of beer with each shipment, and a longer subscription—six months—will help you save in the long run. 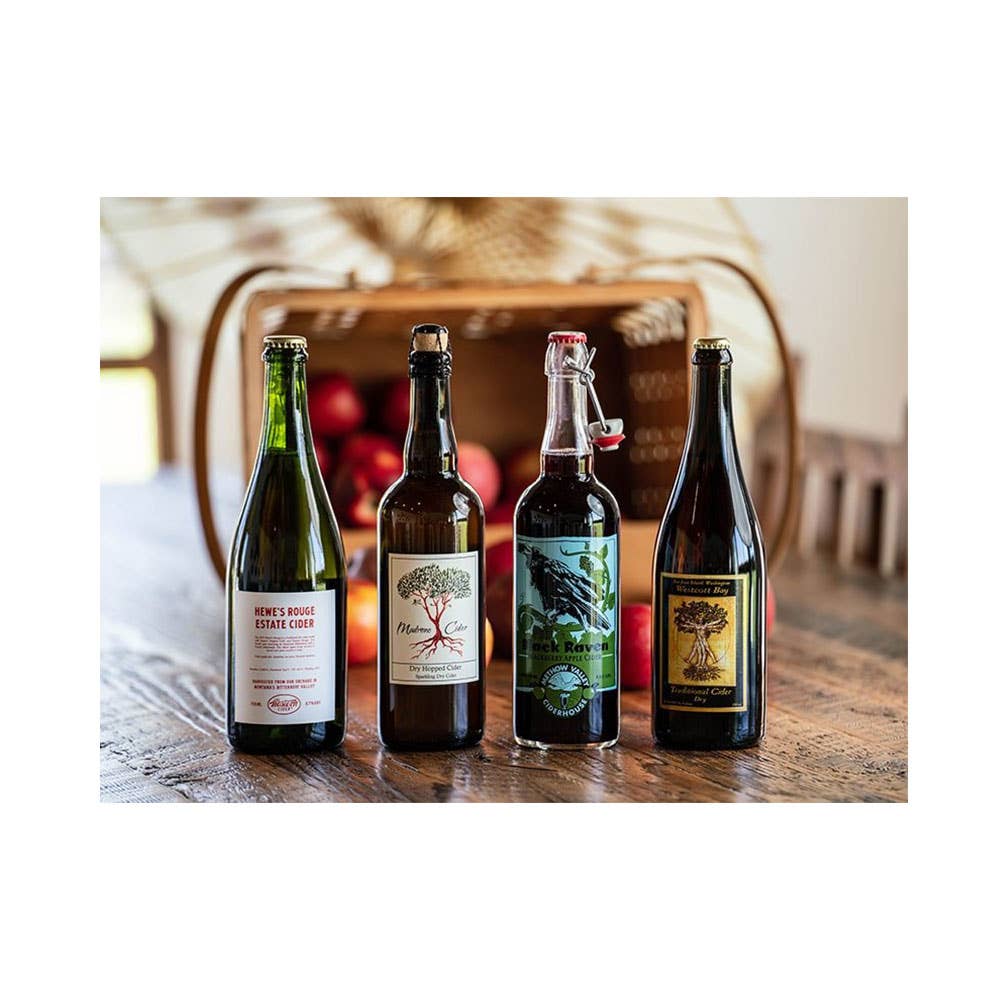 If Demmon is being honest, she sees a great benefit in going with a cider subscription, and ‘tis the season to be delving into a variety pack of artisanal options. For $130, she recently scored 10 bottles through Northwest Cider Club, which sources products from 100 independent cider makers from all over Oregon, Washington, Montana, and Idaho, as well as nearby British Columbia. “I chose Northwest Cider’s box because it’s a lot of cider for a reasonable price, and it also gave me access to some awesome ciders I wouldn’t normally be able to get at my local bottle shop,” she shares. Shipping every quarter, you’ll receive seasonal special batches selected by the Northwest Cider Association.

There are definitely a few regulations around beer subscription boxes to be aware of—generally speaking, you won’t be able to receive a delivery in Alabama, Utah, Kentucky, and Mississippi, as these states do not allow any alcohol deliveries whatsoever. Other locations with limitations include Arizona, Delaware, Indiana, Missouri, North Carolina, West Virginia, and Vermont. Additionally, many boxes cannot be sent to Alaska or Hawaii. Our recommendation is to look into your local laws or double check each offering’s shipping terms and conditions. Last, but not least (and it may go without saying), the order must be placed by someone 21 years of age or older, with some states requiring a signature upon delivery.

Q: What are the benefits of a beer subscription box?

Aside from access to new releases, rare, or exclusive brews, a subscription box also often comes with extra goodies, and it's an easy way to recreate the tasting experience of a tap room at home. The Bronx Brewery, for example, always includes tasting notes to learn about what you’re receiving.