Everyone heard about the wild jumps in sales of flour, yeast, and hand sanitizers during the pandemic, but another product enjoyed a big bump during everyone's reintroduction to their pantry: canned salmon. In 2020, the category sales rose by more than 30 percent before tapering off to just 10 percent more than pre-pandemic levels in 2021.

"Good canned salmon can be incredible," says Bryan Jarr, the owner of Seattle's tinned fish and cocktail spot, JarrBar. He turns it into a rillette for his menu, dressed with olive oil, paprika, and lemon and mixed with apple and fennel. "It's best prepared," he says, unlike high-end canned tunas or sardines, which he serves straight from the jar. "It's a way to use a good quality salmon product any time of the year."

The consumer’s perception of canned salmon is very different from the processor's, however, points out Daniela Klimsova, a former canned salmon buyer and director at a seafood company. While consumers are generally looking for flavor in the quality, artisanal salmon or for an affordable protein from the mass-produced brands, canning is a matter of sustainability and quality for processors.

Plants are competing for fishermen and their catches in Alaska, Klimsova explains. They don't want to limit what they can buy because of capacity limitations, so canning lines run faster, reducing the risk of having to turn away a favored fisherman. Beyond that, canning is forgiving, so they're able to can fish of lower grades that really have nothing wrong with them in quality or flavor, but simply aren’t as visually appealing as frozen fillets. "If you can it, nobody cares," says Klimsova, pointing out that it allows them to create less waste and be more respectful of the resource. "It's kind of like a safety valve."

Canning makes it a safety valve for the home cook, too, creating a shelf-stable protein that fits into all kinds of dishes. The variety of styles—from standard skinless, boneless pink salmon to the big flavor of smoked fatty king salmon—opens up a world of flavor. "I use skinless boneless [sockeye] in recipes where flaky salmon is called for," says Klimsova, including quiches and hand pies. Salmon croquettes, loaves, salads and burgers all work well with the canned fish. All types of fancy appetizers and favorite salmon recipes from around the world, can be tweaked to use canned salmon straight from the pantry.

But it matters which salmon you choose: budget brands can bring off, fishy flavors, while the top ones—which commanded top prices—showed off why the very best canned salmon deserves a spot in every pantry. 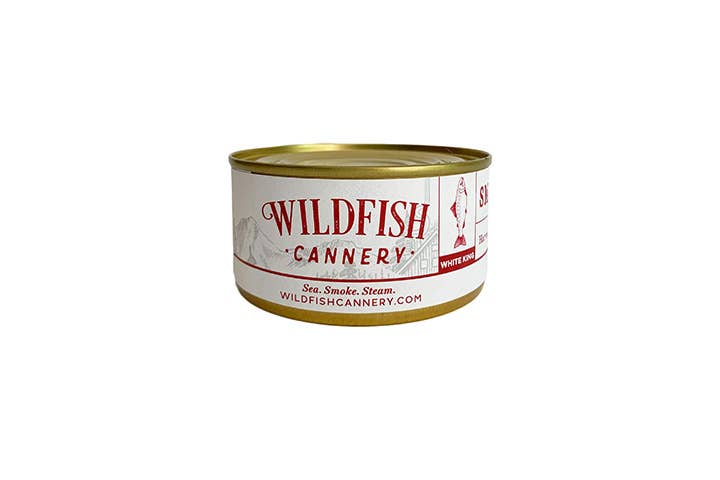 Why we chose it: Tender and flaky, this rich white king salmon actually manages to improve upon fresh salmon with balanced levels of salt and smokiness.

About 5 percent of Alaskan salmon lack the signature orange pigmentation, and though technically nothing else is different about white-fleshed salmon, this can impressed tasters more than the standard king. The moist meat flaked easily and the alder smoke balanced out the oily richness from the fattiness of the big fish. While most canned salmon is destined to be an ingredient, this one shines on its own. 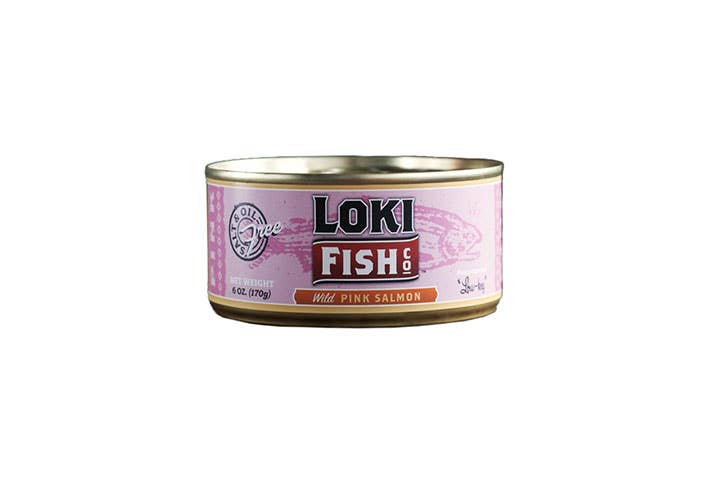 Why we chose it: This is the classic skinless, boneless pink salmon, but produced in small-batches, with an eye toward quality.

Loki, a small, family-run fish company based in Seattle, fishes in Alaska and processes in Bellingham, Washington, forgoing the standard Alaskan processing plants and operating via direct sales. The results of this care show in the quality: the taste is clear, with no off flavors or fishiness, and the big chunks of meat have a nice flaky texture. As is the nature of pink salmon, it leans a little bland, but that makes it good for use in recipes, and upgrading ($1 more) to the olive oil-canned version also ameliorates that. 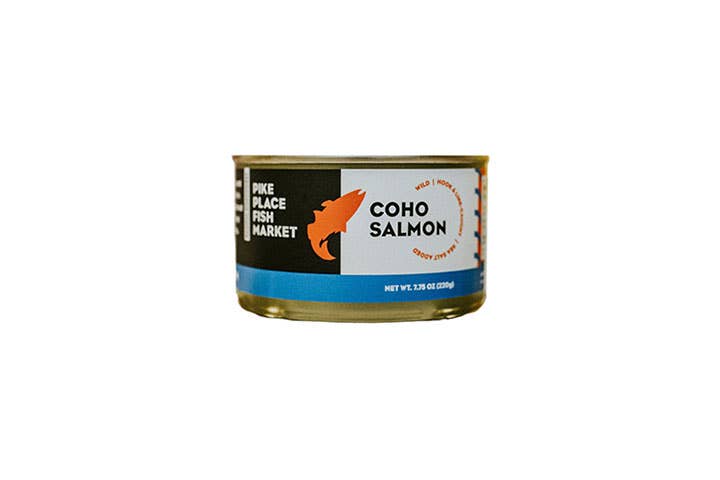 Why we chose it: The high-quality and extra flavor of this coho makes it work well as either the star of a dish or in traditional canned salmon preparations.

Mild coho shares a lot of characteristics with the classic pink canned salmon, but turns up the flavor and texture with a little extra fat. This big, nicely branded can comes densely packed with meaty, flaky orange fish. It works well in recipes because it brings enough salmon flavor to enhance the dish, but not enough to overwhelm. At his bar, Jarr taste-tested a variety of species and landed on this coho as the best texture in dishes like his rillettes. "The king was a little too much, and it's a lot more expensive. I love coho." 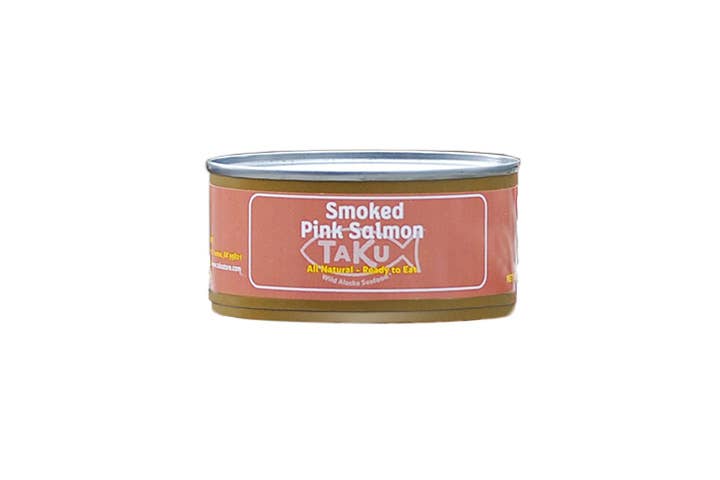 Why we chose it: Big salt and smoke gives this fish a delightfully powerful flavor.

When this can is first opened, its aroma is similar to canned smoked oysters—not because something seems off about the fish, but because the intense alder smokiness captured in the cans is more reminiscent of the tiny bivalves than of the usual gentle smoke of salmon. The soft, rich fish seems fattier than most pinks, giving it added oomph. The only downside to this can is the salt takes it just a touch over the top, but paired with something mild, like a farmers cheese, it becomes an ideal snack. 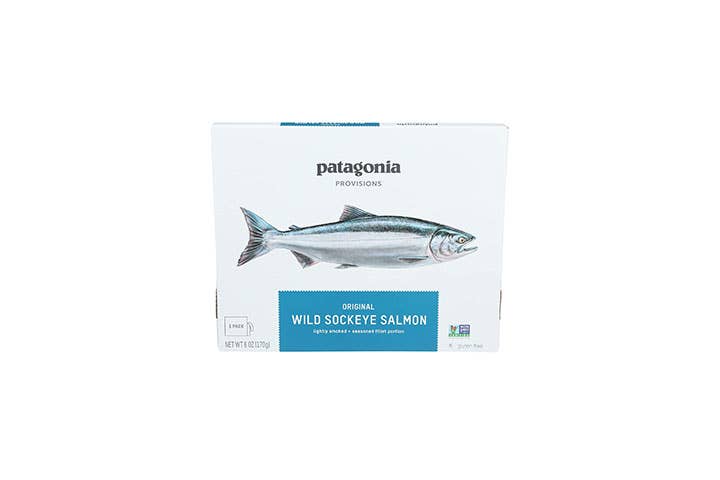 Why we chose it: This lightly smoked pouch pack mimics a freshly cooked salmon fillet in shelf-stable form.

Though slightly disingenuous to include this fish—which comes in a pouch within a box—in the canned salmon tasting, the shelf-stable, lightly smoked format mimics the idea of canning and produces a similar product. It does have one major advantage: it looks just like a nicely cooked fillet of salmon. Though the similar "flavored" products were misses in the tasting (nearly imperceptible flavor, and what was there was not great), the "original," with just a tiny hint of smoke, makes an excellent addition to a charcuterie board or ingredient in any recipe that might normally call for cooked salmon. The disadvantage of the pouch is evident upon opening, leaking salmon juices everywhere if you are not careful.

We tasted almost 30 different canned (and jarred and pouched) salmon products on their own, then tested the best in prepared dishes to whittle the field down to our five favorites. The initial products were either suggested by our expert sources or sourced by our market editor, who researched the category with eyes on quality, price point, variety, and sustainability. Ultimately, we only included wild-caught salmon.

Features to Keep in Mind When Shopping for Canned Salmon

The easiest way to make sure you always buy sustainable salmon is to stick to wild American salmon. "If it's from Alaska," says Klimsova, "you don't have to worry." After succumbing to overfishing in the middle of the 20th century, the combination of self-regulation and strict fishery management in the U.S. has ensured Alaskan fisheries don't repeat history. While much progress has been made at salmon farms around the world, very few are sustainable, and even then, the fish they produce lacks the richness and flavor that makes salmon so good.

In Alaska, nearly all salmon are caught via gillnet or purse seine, and it is highly regulated by each fishery. Purse seine generally catches pink salmon, while gill nets catch sockeye, keta, and coho. Purse seine basically captures a large group of salmon at once, making it efficient and effective, with little damage to the environment. Gillnets get set up in the path of the fish, letting them swim in and get stuck (by their gills, naturally). Larger gillnets were controversial for their large bycatch and depleting of stocks in previous eras, but today's Alaskan gillnets are smaller and used for very limited seasons, to keep them more sustainable.

The five main species of wild Pacific salmon on the market are pink, keta, coho, sockeye, and king (also known as Chinook). Pink, the cheapest and leanest, tends to be the most common species found in cans in the U.S. Canned skinless, boneless pink salmon is most popular in the South, and most canned salmon buyers are older than 55, says Klimsova. The affordability, shelf-stability, and mild flavor have long made it an easy protein option. The other main species used for canning is sockeye—though much of that harvest goes to Canada and the UK. Keta, also known as chum or dog salmon, tends to show up less in cans, in part because of the smaller harvest—it made up just six percent of the 2021 harvest in Alaska. Similarly, coho makes up just one percent and king just a fraction of that. "They're just too valuable," explains Klimsova. "And there aren't enough to make it worth running the canning line." However, when they do make it to a can, the results are delicious.

The majority of canned salmon in the U.S. is skinless and boneless pink salmon, though the skin actually holds much of the fat—and thus flavor—so is worth seeking out when possible. Sockeye is canned somewhat more commonly with the skin and bones on. The bones in canned salmon are edible, though add some texture, so many people choose to remove them before eating. Beyond that, it can be in fillets or chunks—the former more likely in packaging outside of traditional tins, like jars or pouches.

Traditionally, canned salmon comes in the tall cans, which hold 14.75 ounces, or the half-size 7.5 ounce cans, explains Klimsova. But the surge in popularity has brought artisan canners putting salmon into a wide variety of tin sizes, as well as small jars and lightweight pouches. As we wrote in the canned tuna taste test: While BPA-lined cans became the food-packaging concern de jour in the 1990s, the reality is that the chemical used in some cans is not a major concern. “Studies pursued by FDA’s National Center for Toxicological Research (NCTR) have shown no effects of BPA from low-dose exposure,” wrote David Neimanis for Heated in 2020. The glass jars have the advantage of being BPA-free and looking nicer, but the added weight makes them more expensive for shipping. However, some companies using smaller canneries like Loki do note that they are BPA-free, if it is of concern.

Canned American wild salmon is the most common in the U.S., but you will sometimes see cans from Thailand, many of which may use Russian fish. The Russian salmon fishery has newer, fancier equipment, says Klimsova, but the disadvantage of the Thai canned fish (regardless of the origin of the fish itself) is that it all has been frozen prior to the canning.

Q: Is canned salmon as healthy as fresh salmon?

Q: Does canned tuna or canned salmon have less mercury?

Canned salmon has much less mercury than most canned tuna, says Klimsova, because of salmon's shorter lifespan.

Of the many recent taste tests, canned salmon has the tightest correlation of price to quality: in general, the more you pay, the better the canned salmon (and vice versa). While we aimed to choose favorites across price ranges, the reality was that super-budget brands simply couldn't compare to even the mid-range cans. If price is the most important factor, just pick the cheapest wild Alaskan brand on the shelf and feel comfortable knowing it is still meeting good sustainability standards and full of nutrition. But if you're willing to pay a little more, upgrading your canned salmon gives you the freedom to use it like you might freshly cooked salmon.