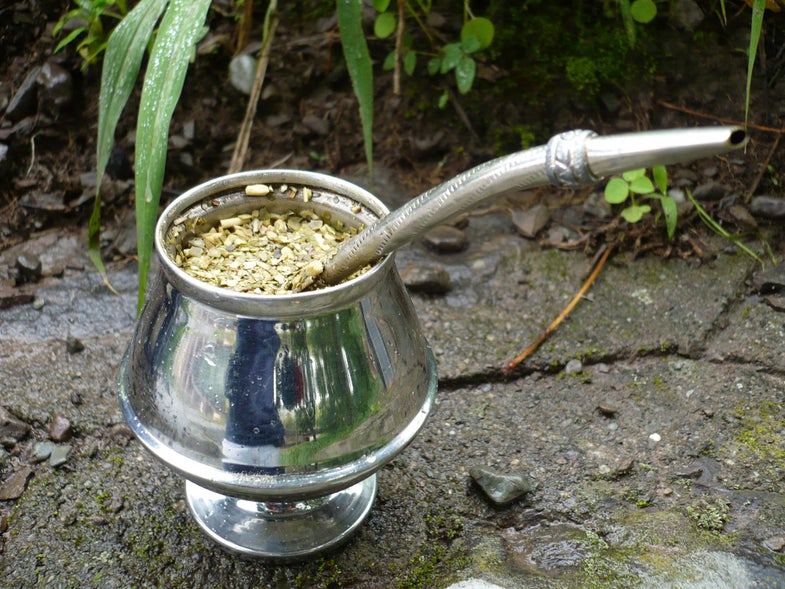 In a land where ordering coffee with milk seems highbrow, yerba mate (pronounced mah-tay) is the drink of the people. This herbal infusion, the dried leaves of the Ilex paraguariensis holly bush, packs an earthy, funky, bittersweet bite. It shares the grassiness of green tea, but with a more potent, stimulating kick, and a lower caffeine content than coffee means fewer withdrawal headaches and gentler jitters. If you’re looking for a coffee alternative that still packs a wallop, mate may be what you’re looking for.

Ubiquitous in Argentina and also popular in Bolivia, Paraguay, and Uruguay as well as parts of Brazil, Chile, and Ecuador, mate is more than just a beverage. It’s a social experience, something to share with a crowd. During a year in Buenos Aires, I grew accustomed to passing a communal cup around while getting lost in conversation, somewhere pleasantly between caffeine-buzzed and tea-blissed-out. And it became a common sight to watch mate-drinkers cram all their gear under their arms on their morning commutes, no big deal.

Preparing and sharing mate has a ritual component, too, not unlike the practice of making your morning cup of coffee. The traditional setup calls for hierba (the leaves that the Argentines pronounce “shhhhierba”), a thermos full of hot water, a bombilla (a metal straw that ends in a metal filter to keep leaves out of your drink), and a gourd (a drinking vessel made from a dried calabash squash and often lined with stainless steel). Of course, you can always use loose leaves in a teapot, or, even more convenient, mate tea bags, but the ritual of making and sharing mate is half the fun.

To begin, the person preparing the mate will fill the gourd a third to halfway full with the hierba, then pack it down and pour hot—but not boiling—water over the top, at around a 45 degree angle to fully moisten the leaves without disturbing them too much. (Water in excess of about 175 degrees will produce a brew too bitter even for the most ardent espresso-lovers.)

Then it’s time to take your first hit from the mate gourd. If you’re sharing with others, just remember one thing: do NOT touch the bombilla with your fingers—it’s a sign of a disrespect for the host, and the metal straw can singe your fingers. There’s no concern, though, about sharing germs, so just go in and slurp with care, going slowly to keep from burning your tongue. It shouldn’t be more than a few gulps before you hear the gurgling sound of an empty gourd; at that point, it’s time to pass the gourd back to the host or hostess to refill it (mate, like many teas, can be re-steeped several times). You and your fellow materos will continue to chat and sip until either you run out of water or it’s time to move the party to another location.

In the excitement of your first mate experience, you may lose track of time and forget just how many rounds the gourd has made around your circle. That’s a good sign. You’re getting hooked.