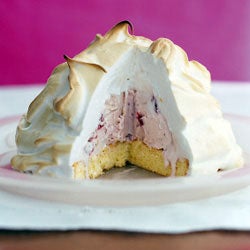 Baked alaska is a stunt that began as a joke. Actually, it could well have been one of the many jokes made at the expense of President Andrew Johnson’s secretary of state, William H. Seward, after he bought Alaska from Russia for just over $7 million in 1867. Wags called the distant northern territory Seward’s Folly and Seward’s Icebox, so it was probably inevitable that someone would create a snowy dessert—consisting of ice cream covered with lightly browned meringue—and dub it baked alaska.

Although the name first made its way into print in the original (1896) edition of Fannie Farmer’s The Boston Cooking-School Cook Book, the idea of baking ice cream inside an insulating sandwich of sponge cake and meringue had been around for much of the 19th century. Thomas Jefferson dabbled with a “hot” ice cream pudding in 1802; the chef of the Chinese mission in Paris may have cooked ice cream in pastry in 1866. But the underlying science, showing that the air in egg whites (and cake batter) acts as insulation, we owe to that genius of practical thermodynamics Benjamin Thompson, known as Count Rumford, who paved the way for baked alaska with his work on the resistance of egg whites to heat in the early 1800s.

The French serve a similar dish, omelette norvegienne, thought to have originated around the same time as baked alaska. Instead of resting on sponge cake, their ice cream sits on Grand Marnier-soaked genoise. After the meringue is browned, the dessert is often flamed with Grand Marnier at the table. Whichever dessert came first, the tipsy faux-Scandinavian French or the teetotaling, anti-expansionist American, either is a good trick that can (indeed has to) be thrown together at the very last minute—and guarantees a warm reception from the chilliest of guests.