The Fine Madness of Eggplant

History has been unkind to the bitterly delicious eggplant, but it's still one of the world's most popular vegetables. 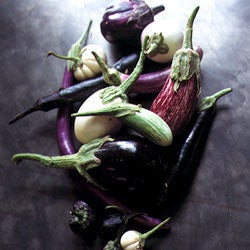 When I was a kid, we grew eggplant in our backyard garden in the San Fernando Valley, and I can remember my father drop-kicking one over the fence one day so that my mother wouldn’t notice it was ripe and try to serve it to us. “These things are just purple footballs,” he remarked at the time—though what he really objected to wasn’t the vegetable’s shape so much as its inevitable bitterness at the dinner table. My mother, it seems, knew only one way to cook eggplant: She fried it. Unfortunately, she didn’t know enough about the stuff to salt it first, thereby leaching out some of its bitter taste.

Eggplant has had a reputation for bitterness for many centuries. According to an ancient joke, for instance—told more than a thousand years before my parents planted their garden—a Bedouin in ninth-century Baghdad, when asked his opinion of eggplant, replied, “Its color is like unto a scorpion’s belly, and its flavor is as the scorpion’s sting.”

Well, maybe it loses something with the centuries, but that’s certainly how a lot of people think of eggplant even today—as something unpleasantly, almost stingingly, bitter.

In Southeast Asia, however, where eggplant (Solanum melongena) was originally domesticated, people value bitter flavors. The Thais even add a tiny eggplant relative called pea eggplant (Solanum torvum)—about the size of a marble—to soup, curries, and chile sauce, precisely because of its intense bitterness and tartness.

The eggplant’s history began innocuously enough. Technically a fruit and not a vegetable (though almost always eaten as the latter), eggplant was apparently first cultivated more than 2,500 years ago, somewhere in the area between Cambodia and southern China, by the Dong Son—a people who never developed a writing system, and consequently never got as much press as their more literate neighbors. When the eggplant reached India, somewhat later, something unfortunate happened to it: It became associated with madness. Possibly this was simply a matter of word similarity. The Sanskrit for eggplant is vatingana, which looks as if it has something to do with the Sanskrit word for “wind,” vati. In India, insanity is commonly compared to flighty and unpredictable currents of air—it’s called the “wind sickness”—and thus the eggplant’s reputation suffered.

The eggplant was still associated with madness when it reached the Near East in the early Middle Ages. Even today, if somebody contradicts himself in Egypt, his listener is likely to say “Adi zaman il-bitingan“—”Uh-oh, it’s eggplant season.” The Tuaregs of the Sahara have told anthropologists that if you eat eggplant twice a day for 40 days, you’ll go crazy. They swear that somebody tried this once and at the end of 40 days he walked around naked, saying, “I’ve eaten eggplant twice a day for 40 days and now I’m insane.” (Either they really believe this or they like pulling the occasional anthropologist’s leg.) The insanity thing reached even into Italy, where the name vatingana, having passed through Persian, Arabic, Spanish, and several dialects of southern French, eventually turned into melanzana—which many Italians apparently thought derived from the words mel insana, “crazy apple.”

Nor was insanity the only problem eggplant was accused of causing. As early as the ninth century, Arab doctors warned against it, saying that it brought on melancholia, liver problems, inflammations of the mouth, cancer, and even freckles. If you insisted on eating it anyway, they recommended that it be served with vinegar—which doesn’t sound like nearly strong enough a measure. European doctors later added leprosy, enduring fevers, and very bad headaches to the eggplant’s catalogue of supposed effects. The problem here probably wasn’t linguistic, but rather had to do with the eggplant’s spongy, unwholesome look when raw—not to mention the fact that some observers correctly guessed, from the appearance of the plant, that eggplant is related to the deadly nightshade, which of course is poisonous. (Its other relatives include tobacco, the potato, and the tomato.)

But ultimately the eggplant triumphed. The watershed event may well have been in the 9th century at the lavish wedding of Lady Buran, daughter of Al-Mamun, the caliph of Baghdad—when, for the first time (at least in the public eye), eggplant was prepared in a way that mitigated its bitterness. The next thing you knew, the 10th-century Arab poet Kushajam was boldly writing, “The doctor makes ignorant fun of me for loving eggplant, but I will not renounce it. / Eggplant has a flavor like the saliva generously exchanged by lovers in kissing. / No one loathes it but a fool, and none but the cultured love it.” Almost overnight, the eggplant was on its way to becoming the Near East’s favorite, the sayyid al-khudar, or “lord of vegetables”. Whole communities seemed to spend the rest of the Middle Ages devising new eggplant recipes. The Turkish city of Denizli, for instance, boasts of the fact that its cuisine includes 35 traditional eggplant dishes.

The most common eggplant in America, and in much of Europe, remains the familiar big purple-skinned variety, which ranges in shape from almost round to an elongated globe. Rapidly becoming more popular here, though, are the smaller, thinner, gently curving Japanese and Chinese eggplants. In other parts of the world, there are almost endless variations on the thing: The same shapes occur, but they may be green or white or multicolored. Some eggplants are white-skinned and almost exactly the size and shape of the egg after which they are named in English. Some are faint purple-pink. Others are orange and the size of Ping-Pong balls, or long and skinny and almost black. One orange-skinned Thai variety is covered with fine, dark hairs. There are also a lot of half-wild cousins of the eggplant in the neighborhood, at least half a dozen of which are eaten—for instance, Solanum aculeatissimum, whose round, yellow orange fruits are either roasted or thrown into curries in Thailand.

Today, the eggplant is widely eaten not just in the Middle East and Asia, but in Africa, southern Europe, and Latin America. Often, especially in stewed dishes, it is combined with its cousin the tomato—for instance, in that elemental Mediterranean classic, ratatouille—which also involves zucchini and sweet peppers. In many countries of Eastern Europe, a popular appetizer is a seasoned eggplant puree called by the local name for caviar (for instance, ikra or ajvar). The capaciousness of some eggplant varieties practically demands that they be stuffed, and this is usually done with meat or with a combination of meat and chopped-up eggplant flesh. In Spain’s Balearic Islands and Catalonia, it’s even sometimes filled with fish. Another Spanish recipe, on the other hand, reverses the process—and stuffs meatballs with chunks of eggplant.

The most unusual preparation of eggplant in the world might very well be the Greek specialty called gliko melitzanis, or candied eggplant. This is one of those teeth-rattlingly sweet things Greeks like to nibble with their coffee—and, to tell the truth, it is generally so saturated with sugar syrup that you sort of have to take their word that it’s eggplant.

In the United States, after a long period as an “ethnic” specialty, Solanum melongena has enetered the mainstream. Folks even turn it into terrines and elegant soups. And it’s been a long time since anyone has made any cracks about scorpions.