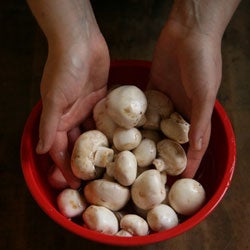 I hadn’t given button mushrooms much thought until one evening many years ago when I was a teenager. A crowd of friends was cooking together, and when I blithely went to wash off a carton’s worth of mushrooms—a practice I’d always followed—my friend Lydia looked at me with horror. “You’re never supposed to wash mushrooms,” she said. “You’re supposed to brush them clean.” Lydia tended to be one of those people who always knew better, so it was with some satisfaction that I later discovered instructions to wash button mushrooms in recipes by such leading lights as Julia Child and Pierre Franey. Still, some books, including Larousse gastronomique, warn against washing, and the prevailing wisdom among many cooks I know is that mushrooms are so absorbent that even a brief rinsing can leave them waterlogged. It took scientific proof to satisfy me once and for all. In an experiment described in The Curious Cook (North Point Press, 1990), author Harold McGee demonstrates that after soaking for a full five minutes, a button mushroom absorbs only one-sixteenth of a teaspoon of water. A speedy rinse, McGee concludes, causes virtually no water retention. Brushing makes some sense if mushrooms are to be used raw, as rinsing can damage surface cells and cause discoloration. But when you’re following a recipe like the one for Mushroom Moussaka, brushing each button mushroom individually would be time not very well spent. The myth of the soggy mushroom, it turns out, just doesn’t hold water.