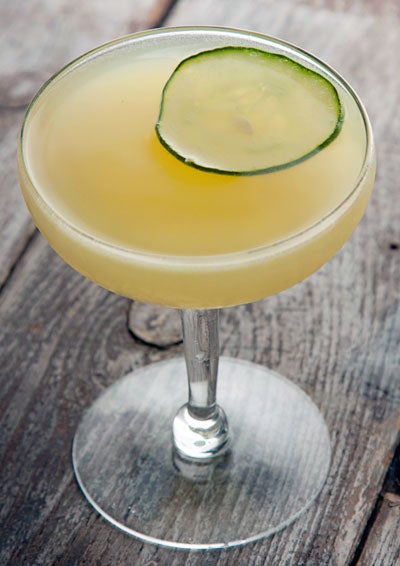 Cool, mild cucumber and sweet elderflower liqueur echo gin's floral notes in this cocktail, served at Atmosphere, the bar on the top floor of the tallest building in Beijing. With notes of apple, lime, and a bit of heat from fresh ginger, it has an effect talmost like a spa in a glass. Get the recipe for The New Airline. Maxime Iattoni
SHARE

It was hot the last time I was in Beijing. But summer is always hot in the northern capital—July and August temperatures regularly reach over 40° Celsius, which doesn’t sound too bad until you do the mental calculation and realize that it means over 104° Fahrenheit. Years ago, when I briefly lived and studied there, I rode out the heat on a bike, creating my own breeze as I sailed across the campus of Tsinghua University and through the city’s streets. At home in my host family’s apartment, I learned to love eating chilled fruit, slowly making my way through a bag of cold lychee or longans during the long, hot afternoons. And in the evenings, my friends and I beat the heat at rustic, outdoor restaurants (the only places we could afford) while drinking large bottles of cold, nearly flavorless Chinese beer.

Today’s Beijing, however, is not a place for bicycles. The streets are so crowded with luxury cars that the few people who continue to pedal their way to work wind up taking over the sidewalks. If I want to explore, I walk for as long as I can, then duck into a café or a taxi for a blast of air-conditioning so strong it shocks the system. Still, the best evening solution for the heat remains a cold beverage, though now I prefer something with flavor, and preferably with gin. On my most recent trip to the city, I found just the thing: a light, cucumber-laden concoction called the New Airline, served at Atmosphere, the bar on the top floor of the tallest building in town, in the Shangri-la Hotel China World Summit Wing. The coolness of the cucumber and a dose of elderflower liqueur echo gin’s floral notes, and there’s a bit of heat from some fresh ginger, lending an almost spa-like effect. Fresh apple and a hint of lime round out the flavor, giving the drink depth, and to my delight, enough bite to satisfy my summer craving for chilled fruit.

See the recipe for the New Airline »