Turns Out, Maraschino Cherries Are the Real-Deal Forbidden Fruit

As this new book reveals, the syrupy sweet cocktail garnish has a deadly delicious side. 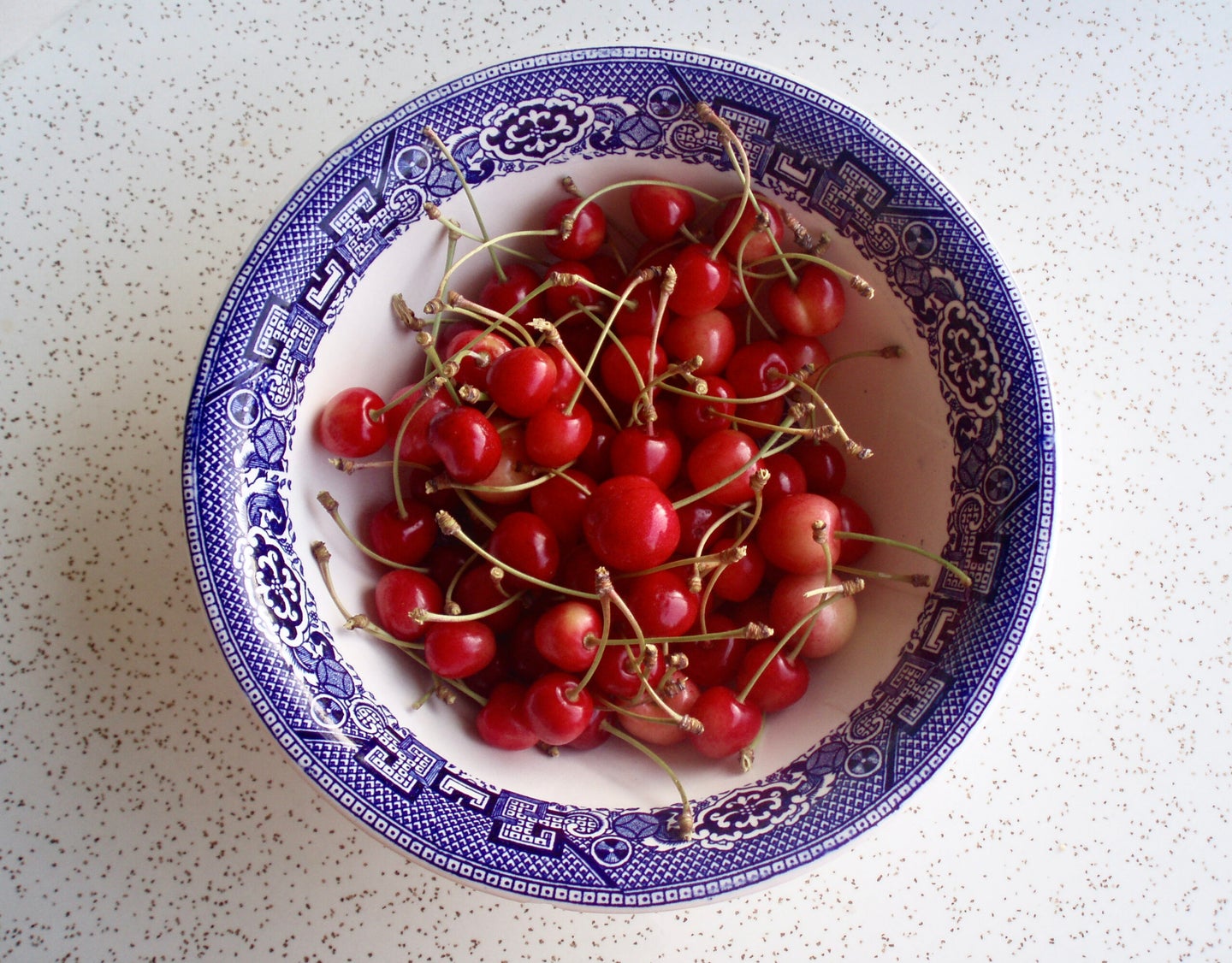 In The Book of Difficult Fruit: Arguments for the Tart, Tender, and Unruly, Kate Lebo explores “not the smooth-skinned, bright-hued, waxed and edible ovary of the grocery store.” No, her subject has a flair for the dramatic and demands patience and care to reap the benefits of, say, a rebelliously tart ume plum that’s been fermented into briny umeboshi goodness, or the notoriously funky durian left to mellow in a coconut-laced ice cream. Diving into the cultural, culinary, and curative backstories of 26 fruits, each essay and accompanying recipe is a delight to read and cook from. Here is an excerpt from her chapter on the deceptively sweet maraschino cherry.

The maraschino cherry as we know it was invented at Oregon State University during Prohibition to garnish virgin cocktails—or that’s how the story is often told.

Real maraschino cherries were historically a Croatian delicacy made of Marasca cherries, a sour variety that’s still grown and prized today. “Imitation” maraschinos have been made in the United States since the turn of the century, with a variety of nonalcoholic brines. In the 1920s, East Coast maraschino manufacturers ignored Oregon’s and Washington’s crops, because their Queen Anne variety went to mush when preserved. Enter OSU’s cherry wiz: after years of experiments, Professor Ernest Wiegand  discovered that adding calcium salts to cherry brine keeps cherries plump. After 1940, the FDA decided it was lawful to call “imitation” nonalcoholic maraschino cherries just plain “maraschino cherries” in recognition that consumers by now assumed maraschinos were “cherries which have been dyed red, impregnated with sugar, and flavored with oil of bitter almonds or a similar flavor.”

In the United States, we usually derive the bitter-almond oil from apricot kernels, not bitter almonds, unless we produce the flavor synthetically in a lab. (True bitter almonds have higher concentrations of amygdalin, the chemical that creates almond flavor, but are illegal to retail in the States because of their toxicity.) A bottle labeled “pure” bitter-almond oil bought stateside is likely made from apricots. Some chefs I’ve known further clutter the nomenclature by calling apricot kernels “bitter almonds,” which is what I now call the kernels I saved from last summer’s harvest and stored next to my nutmegs.

The pits of cherries, plums, and peaches contain amygdalin, too, though in smaller concentrations, which means their almond flavor is not as strong. It remains common for cherry-pie recipes to recommend a teaspoon of “pure,” “real,” or “imitation” almond extract to gesture toward the bittersweet flavor of cherry pits without risking their potential poison.

Reports vary on how many bitter almonds one could enjoy before regretting that choice. When amygdalin reacts with stomach acid, it splits into a nontoxic almond flavor called benzaldehyde and poisonous hydrogen cyanide, also known as prussic acid. A healthy human body can ingest small amounts of cyanide without ill effects, but higher amounts over time are poisonous. Toxicity depends on how large a person is, how healthy, and how concentrated the amygdalin content of the bitter almond. When I eat bitter almond products—all made from stone-fruit kernels, not from true bitter almonds, and so slightly less dangerous—I do not eat them casually unless they’ve been baked. I’d prefer to eat persipan (a paste made from crushed apricot kernels and sugar that tastes bitter and satisfying, like dark chocolate) by the spoonful, but I eat it by the knifepoint instead. I do not serve the “almond” extract I make from crushed cherry pits raw to children, or serve it in quantities to adults as if it were amaretto, but I do add it in small amounts to pies. An advisory on these treats seems only right; some friends blanch at the flavors they’re about to experience, fearful of cyanide no matter how small the dose.

To flavor jams, pies, and baked goods with stone-fruit pits, most recipe writers recommend blanching the kernels to be on the safe side. Others insist that blanching does nothing but degrade flavor, that the boiling point of water is 212°F and hydrocyanic acid does not dissipate below 354.2°F, so kernels must be roasted instead. This is how mahlab, a Mediterranean spice, is made. When crushed and sprinkled over pastries, it tastes like marzipan, but taken straight from the spice jar, it tastes first like pine nuts, then like bitter wood.

By kernels, I mean the nut-shaped lump you’ll find if you smash the stone of a stone fruit. Beneath the kernel’s wood-patterned skin is a white heart full of flavor. Cherry kernels are bead-sized and hard to extract whole from the crushed shell after the hammer’s done its work, but this is just an aesthetic problem. To remove the skin, blanch the kernel in boiling water for ten seconds, let it cool for a moment, and squeeze it between your index finger and thumb until the skin slips free. Then, if you’re feeling brave, eat it.

In the house where I lived my last year with W, our neighbor’s sour-cherry tree grew over the fence, which made it half ours no matter what she said. During a year of normal weather, the cherries would ripen the week of the Fourth of July. There was a five-day window when I could pick them and they’d be good. After that, they’d darken and soften and fall all over the back deck. Fallen cherries attracted birds, which attracted my cat.

W and I had cherry trees in our backyard, too. Overgrown Bing trees that bore sweet fruit, or fruit that would have been sweet if we had been able to reach it. The nameless cherries from the tree next door were far more neighborly, brushing our shoulders as we leaned against the back deck’s railing, dense and sour and no good raw, no kind of quick treat for the picker. They made great pie.

At the time, I was learning my way around a pie plate. Baking seemed like a way to be powerful but nonthreatening; a confrontation with sugar was a fight I knew how to win. In addition to picking fruit and rolling crust, becoming a pie lady meant imitating a knowing voice when writing down practices I’d just learned from a cookbook or made up on the fly because I hadn’t bought real equipment. The imperative mood was essential. In the absence of a genuine cherry pitter, the pointy end of a chopstick will do. Press the tip into the pit at the cherry’s bottom, opposite the stem end. When the pit eases loose, drag it out by the stem. Discard the stems and save the pits. You can use them and the kernels within them to make almond-flavored simple syrup, vinegar, cream infusions, and jams.

I made those serving recommendations years before I made the foods I recommended. What mattered then was the gesture of knowing, practicing how it would sound. For some of us, this is how recipe writing starts. We try on the voice of the Cook Who Knows, offer likely answers, and build authority from there.
The best cherry-pie recipe is a simple one. When fruit is high-quality, our job is to preserve its natural virtues. Start with five cups of sour cherries, one cup of white sugar, a teaspoon of cherry-kernel extract, salt, and instant tapioca, mixed and poured into a double crust that’s been glazed with egg white, dusted with coarse sugar, then baked in a hot oven. A thin layer of persipan spread over the bottom crust before adding the cherry filling adds a twinge of danger to this otherwise conventional dessert—or could. I haven’t tried making cherry pie with persipan yet, but now that I’ve written that, I will.

In my new neighborhood, a family down the block has flawless sour-cherry trees on their fence line but for some reason does not pick the fruit. Sam and I decided to ask if we could. An old woman answered the door. Her husband had planted the trees years ago. He was dead now. “I’ll make you a pie,” I said to her daughter, who translated my offer into Russian. In the foyer, a little boy was sprawled on his stomach, flushed and asleep on the bench where we would have taken off our shoes had we been invited in. “You don’t need to make her a pie,” her daughter said. “But you can pick the cherries.”

When we came back the next week, the cherries were perfect, too perfect, ready to fall and falling all over the sidewalk. We rang the doorbell to say hello. A new daughter appeared. Her mother didn’t remember us. The daughter wanted us to go away but would not say so. “I’m going to make you a pie,” I said to the old woman. “No, not necessary,” the new daughter said. “Really, I don’t mind!” I said. “Maybe we can exchange recipes.” The women did not scowl, but they did not smile, either. “Wash the cherries before you eat them,” the daughter warned. “They’ve been sprayed.”

While we picked, the boy who’d been sleeping last time ran out of the house with his sister and joined us beneath the trees. “Do you like cherries?” I asked the little girl. She refused to say. She grabbed a cherry from the dirt and threw it at her brother. A man in a suit pulled up in a minivan and said something in Russian that made them go inside and come back out with nicer clothes on. The rest of the family emerged from the house, dressed for church. “I’ll bring the pie next week,” I said as they passed by. The man smiled; the daughter scowled; the mother ignored us; they drove off. The following week, our neighbor erected a chain-link fence around her trees. Branches still arched over the ugly metal, dropping all the cherries we had not picked onto the sidewalk. They rotted there; the birds ate them; we smeared them beneath our shoes and tracked them home. The mess was appalling. She didn’t want a pie, I told myself. I didn’t make her one.

Years after I left W and our fruit trees, I started a new July ritual: make maraschino cherries the old-fashioned way, free of food coloring and calcium salts, preserved for cocktails year-round. I start with four or five pounds of fresh sour cherries and use a real cherry pitter now, a contraption that screws onto a standard canning jar and catches the pits. Sam and I drink Manhattans while we pit, served his favorite way: on the rocks with the previous year’s maraschino cherries, never citrus. I combine the pitted cherries with a bottle of Luxardo maraschino liqueur and heat them briefly, because I read somewhere I’m supposed to do that. Then I seal them in jars with some of the pits to add a dash of benzaldehyde charm. Over the rest of July and part of August, the maraschinos’ candy red will fade to a serious mauve. That’s how we know they’re ready, globes of liqueur-logged fruit that taste of what they once held safe at their centers. Summer glow and fair warning, true cherry and almost almond, the promise and poison from deep in their seeds.

Get the recipe for Homemade Maraschino Cherries »