Well-known for their TV infomercials, sleek design, and press-and-twist functionality, Nutribullets have become one of the most popular blender brands. But with so many models (that all look relatively similar), it can be hard to know which one to choose. We’ve sorted through all of the different options to find the best Nutribullet blenders for everything from silky smoothies to crushing ice. Read on to find the best option for you, whether you’re shopping for two or blending for the entire family. 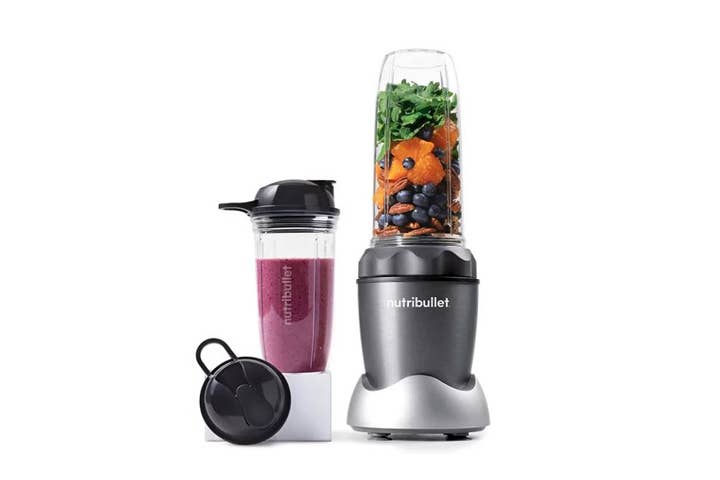 Why we chose it: A strong, powerful blender that pulverizes ice with ease.

Referred to as their “next-level nutrient extractor,” the Nutribullet Pro 1000 has a powerful motor and four sharp blades that are designed to crush ice, pulverize nuts, and fully transform tough fruits and vegetables into smoothies. Plus, we love how the blender is turned on with just a twist of the lid, and that it shuts off automatically. The blender includes two cups (32 and 24 ounces), and it will not be compatible with smaller options. Additionally, it can be a bit tricky to clean under the blades, which are sharp and should be handled with care. Overall, though, you can’t beat the power of this compact workhorse—and at less than $100, it’s reasonably priced, too! 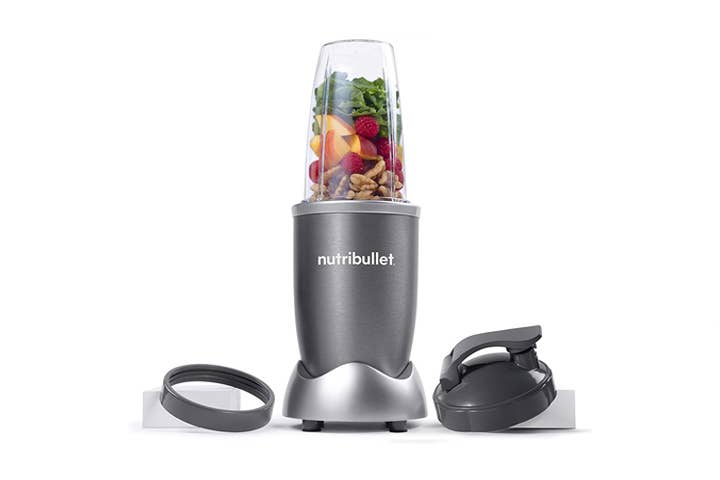 Why we chose it: A budget-friendly blender that makes perfect smoothies for one.

The original Nutribullet, is the machine that started it all. Though upgraded versions have added bells and whistles over the years, you still can’t beat the function of this blender for one. This model includes one 24-ounce cup with one lip and sealing ring, but you can purchase a compatible 18-ounce cup and lip, too. With a 600-watt motor, it’s not as strong as other models on the list, but it’s still powerful enough to blend a smoothie or milkshake with ease. Plus, the cups can go straight from the blender base to your dishwasher once finished. 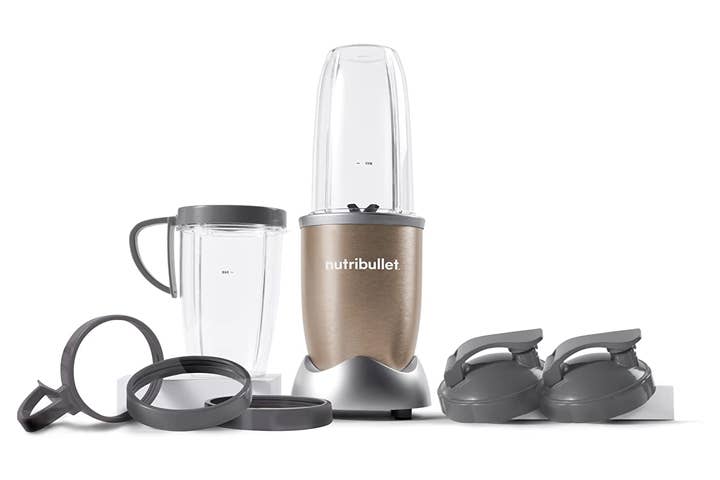 Why we chose it: A powerful blender that’s one step up from the original Nutribullet.

Ranked as our best blender for personal use, the Nutribullet Pro 900 is portable but strong, empowering users to make smoothies anywhere. While it’s not large enough for big batches of guacamole or nut butters, it’s powerful enough to blend shakes, salsas, and soups. Including two 32-ounce cups with lids, handles, and more, you’re getting plenty of bang for your buck. 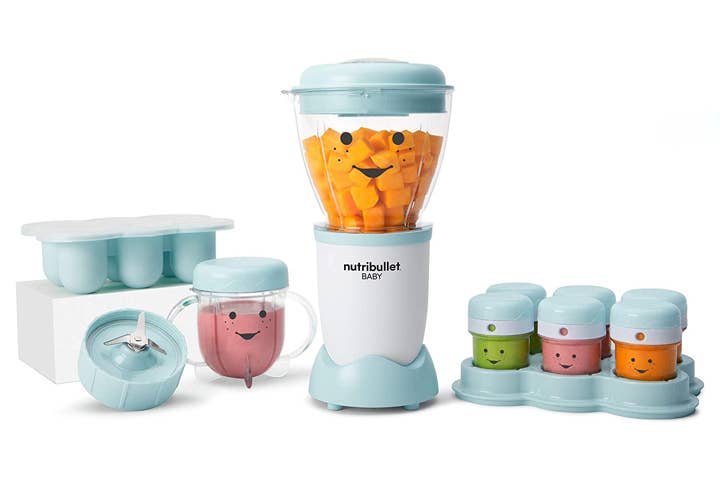 Why we chose it: A parent-friendly machine that makes homemade baby food easy.

Looking for the perfect baby shower gift? Nutribullet has you covered. This baby-friendly set allows parents to puree fruits and vegetables in individual cups, which can be covered with a lid and stored in the refrigerator. Additionally, parents can blend one big batch and divide the puree into a pre-portioned freezer tray. The motor isn’t as strong as others on this list, so be sure your fruits and vegetables are small enough to be smoothly blended. The blender doesn’t include a steamer you’ll need to cook them separately first for velvety purees. However, those who want to make their own baby food will adore this system. 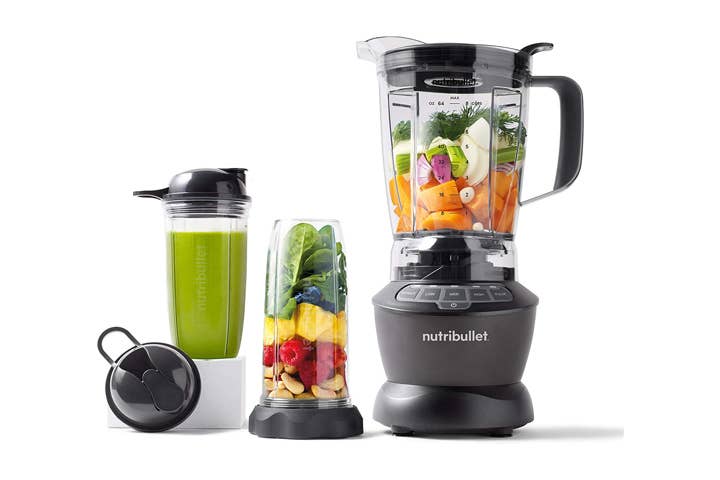 Why we chose it: With a 64 ounce cup, speed settings, and a pulse option, this blender can feed a family with the press of a button.

With the ability to hold up to 64 ounces, the Nutribullet Blender Combo outsizes every other option on this list. Plus, it comes with a single cup that can be used for personal drinks, too. Unlike other Nutribullet options, this blender includes speed controls, a pulsing ability, and a 1200-watt motor for plenty of power. It is pricier than the other blenders on the list, and it will occupy more kitchen space, but it’s a dependable blender that can be used for the whole family. 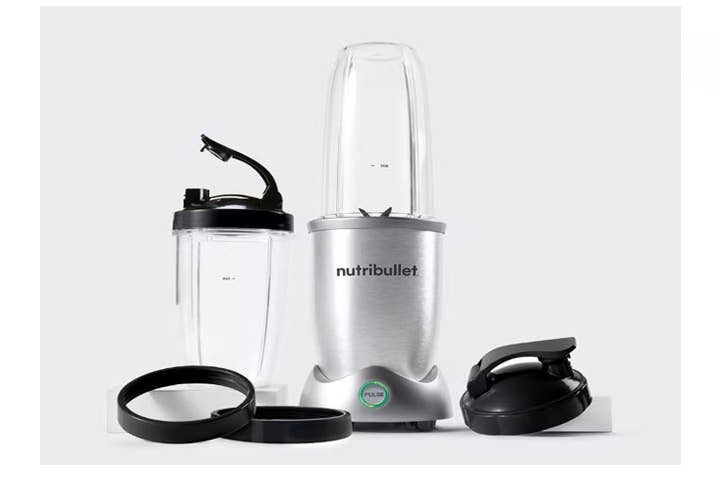 Why we chose it: A sharp, powerful blender that makes fruits and vegetables silky smooth.

An upgrade from the Nutribullet Pro, this model includes a stronger motor for plenty of power—we even gave it our “best motor” award in our list of the best portable blenders. According to the Nutribullet website, this model can pulverize “fresh turmeric root, blackberry seeds, wheat grass, kale and more.” It also includes a pre-programmed pulse function and automatic shut off, so all you need to do is add your ingredients and fire up the blender—it’ll take care of the rest on its own.

Things to Consider Before Buying a Nutribullet Blender

The more powerful the motor is, the faster and more efficiently it will run. Conversely, the lower the wattage is, the harder the blender has to work, meaning it won’t have as long a life expectancy. If you’re going to whip up smoothies regularly, look for a blender that’s at least 600 watts.

32 ounces is the standard size for most Nutribullet blenders, which is enough to make smoothies for two or three people. Anything smaller is best-suited for personal use, while bigger options are better for larger households.

To clean your Nutribullet blender, twist off the blade attachment and carefully rinse with soap and water. The blades can be quite sharp, so use caution when cleaning. Most Nutribullet cups can be washed on the top rack of your dishwasher, and the base can be wiped down with a damp cloth.

A Nutribullet is a smart purchase for smoothie lovers, new parents, or those looking for an affordable, easy-to-use blender. We recommend the Nutribullet Pro 1000 because it offers the most value for its price tag.

We researched all of Nutribullet’s available models, keeping wattage, cup capacity, and value in mind. Using these core principles, we picked the options that best fit the above categories. Every model was thoroughly researched and cross-checked across retailers, ensuring an accurate evaluation that was free from bias.