For beer enthusiasts, a kegerator is the ultimate home appliance. It allows drinkers to have a draft experience in the comfort of their own home, and for many, draft beer reigns supreme over drinking from cans or bottles.

“I personally think draft is the best format for capturing the full range of aroma and taste characteristics of most beers,” says Kayla Gibbens, assistant brewmaster at Widmer Brothers.

Plus, having a kegerator will allow you to ultimately pay less for beer and is a more eco-friendly option than buying beer in cans or bottles. “Having a kegerator in your home means that you can enjoy fresh draft beer anytime, and the cost is cheaper per serving,” says Jimmy Mauric, head brewmaster at Shiner Beer. “Lastly, it’s environmentally friendly because there’s no cardboard and no cans or bottles to go to waste.”

And while kegerators often speak to beer lovers and homebrewers, you can also use it for pouring up kombucha, cold brew coffee, soft drinks, and more.

If you’re ready to serve up some cold beverages, then read on to see our picks for best kegerators. 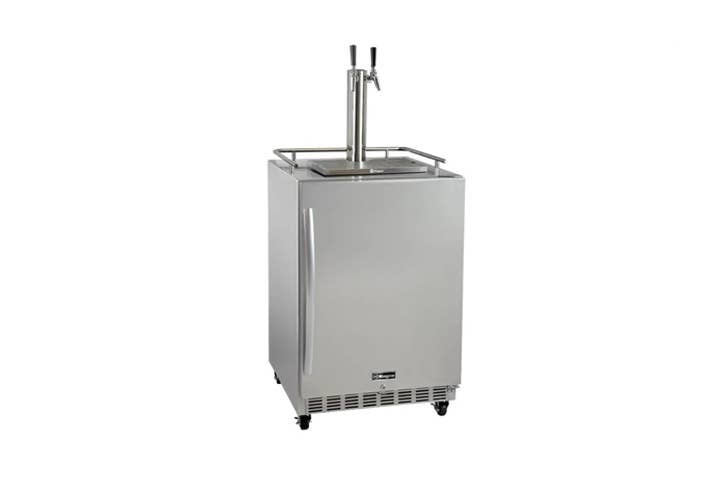 Why we chose it: Kegco is a respected kegerator brand, and this model has the works, with two high-grade kegerator taps and one of the best temperature ranges we’ve seen.

“There are several good brands out there,” says Gibbens. “I personally have a Kegco. It's been reliable, keeps beer nice and cold, and had the features I wanted.”

The temperature range on this Kegco is remarkable and contributes to making it one of the best kegerators out there. It goes from 23 degrees Fahrenheit to as high as 59 degrees Fahrenheit. Plus, it can house a wide array of keg sizes, including the Cornelius kegs commonly used by homebrewers.

What’s also cool about this particular Kegco model is that it has two Perlick 630SS keg taps, which makes it a particularly great kegerator for entertaining.

That being said, it is pricey at almost $2,300. As well, multiple buyers noted that they were missing instructions for setting up different parts of their kegerator. Additionally, many noted that the screws provided for the handle were too short, and there aren’t any hose clamps included. 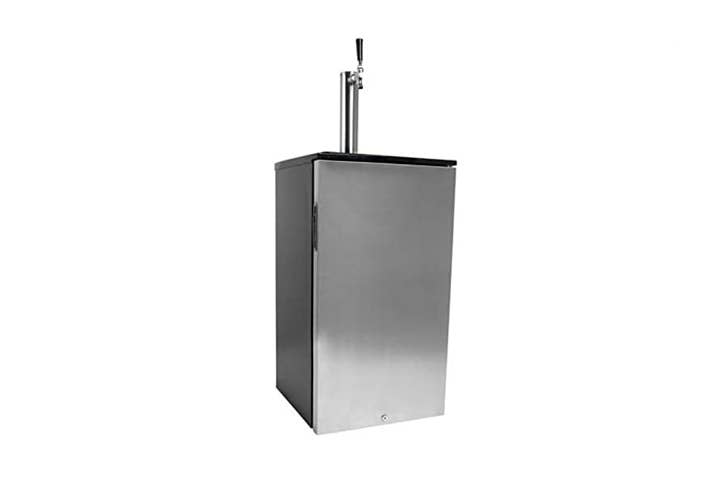 Why we chose it: EdgeStar’s Craft Brew Kegerator is compact, easy to assemble, and easy on your wallet.

At just under $540, this kegerator delivers on quality without breaking the bank. Its compact size makes it easy to fit into any room or garage, and it’s pretty simple to assemble. However, it can only accommodate two types of kegs.

Additionally, many Amazon buyers mentioned receiving a unit that was dented, though to varying degrees of severity. 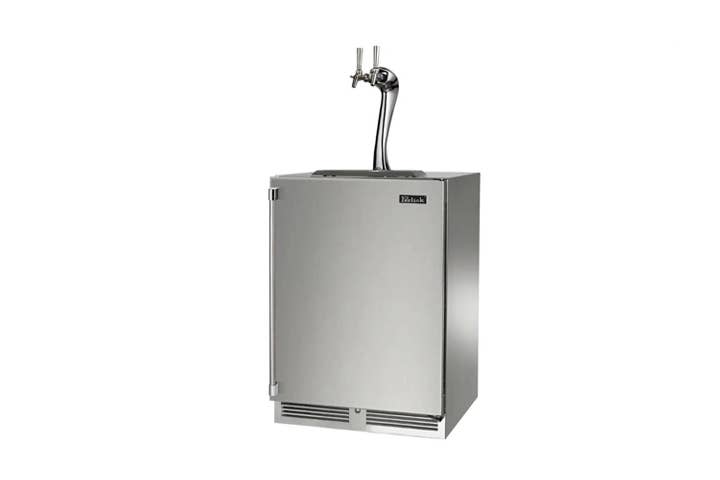 Why we chose it: A trusted commercial brand, Perlick’s kegerators bring the experience of a bar right to your home.

“Perlick is the best and proven,” Mauric says. “The Perlick Corporation has been in business for over 100 years.”

Noted for having their systems in bars, restaurants, and stadiums, Perlick also creates quality kegerators for the home. This dual tap model makes it great for entertaining, and the sleek, design-forward Adara tower will make your kegerator even more of a talking point.

If you love your beer nice and cold, this kegerator is great. But if you want to house warmer drafts, like a stout, this might not be as great, since the temperature range on this model goes from 33 degrees Fahrenheit to 42 degrees Fahrenheit.

As well, this is by far the priciest kegerator on our list, at just over $6,200.

Although not a kegerator, the NutriChef Pressurized Growler Tap System is worth a mention in this guide, especially if you want draft beer at home without investing the money and space a kegerator requires. It’s portable, weighing just under 6 pounds with a tank size of 128 ounces, and it fits well in the fridge, so you can have cold draft beer ready to go for up to two months without the beer going flat. Plus, it’s easy to put together and easy to clean.

Things to Consider Before Buying a Kegerator

This is an important one. First off, Julia Herz, executive director of the American Homebrewers Association, notes, you’ll want to determine where you want to put your kegerator, whether inside or outside, and whether you want it to be built-in or standalone. You’ll also want to consider the size of your kegerator. “How many kegs do you want to fit? How big are each of those kegs?” she asks.

Before you buy your kegerator, make sure you know how much space you can allot to it, whether in your home, garage, or backyard.

“One of the features you want to think about is, is it a standard enough kegerator that it fits your standard half barrel of beer?” Herz says. “That's 15.5 U.S. gallons of beer. You also have the ability to have kegerators that serve smaller sizes. A lot of breweries are also producing beer available through kegs that are maybe five gallons.”

Herz also mentions that homebrewers tend to keg in smaller sizes. So, it’s worth considering if you want a standard bar-sized keg in your kegerator (the half barrel), or if you want to opt for a smaller-sized keg.

Because the optimal temperature can vary for different types of beer, you’ll want to make sure your kegerator has a good temperature range so you can change the temperature properly as you move through different varieties of beer.

How long does a kegerator last?

“It has the potential to last for many years if proper maintenance is done on the mechanical side,” Mauric says.

Speaking of which, be sure to swap in new draft lines periodically. “Your draft lines should be replaced about every 5 years, [or] more often with very regular use,” Gibbens says.

How often do I need to clean my kegerator?

Pretty frequently, our experts say. “You should clean your kegerator every 2 weeks,” Mauric says. “The chemical solution needs to be run through the beer line and faucet.”

​​For the best beer experience, Gibbens cleans her draft lines between every keg. “It's a fairly easy process, and it's worth it to have the freshest beer,” she says. “Otherwise, monthly is a good practice.”

What temperature should a kegerator be set at?

It varies. “If we look at restaurant kegerators and that dispensing system, the commercial ones, most kegerator systems and beers are dispensed at 38 degrees Fahrenheit,” Herz says. “That is mostly designed for American lager, the most sold beer style-wise via draft.”

Accessories to Consider Purchasing With Your Kegerator

How to Brew: Everything You Need to Know to Brew Great Beer Every Time

Recommended by Herz, this book is great for new and experienced homebrewers alike. “It lays out everything you need,” she says, from equipment to techniques to recipes. Consider this your guide to all things homebrewing.

When it comes to determining the best kegerator for you, consider how much space and money you’re willing to invest in it. These can be pretty big and pretty pricey, so if you’re looking for a great kegerator period, the Kegco one will be a fantastic new addition to your home or backyard setup. But if you’re looking for one that is moderately priced and relatively compact, the EdgeStar one fits the bill.

We spoke to three experts about the ins and outs of owning a kegerator. They walked us through which features to look out for, best temperatures to set your kegerator at, and how to care for your kegerator. With that in mind, we conducted independent research and found the best kegerators for the different categories listed above.