How José Andres helped keep us sane, meet the folks feeding the racial justice movement, and find out our favorite childrens' snack. 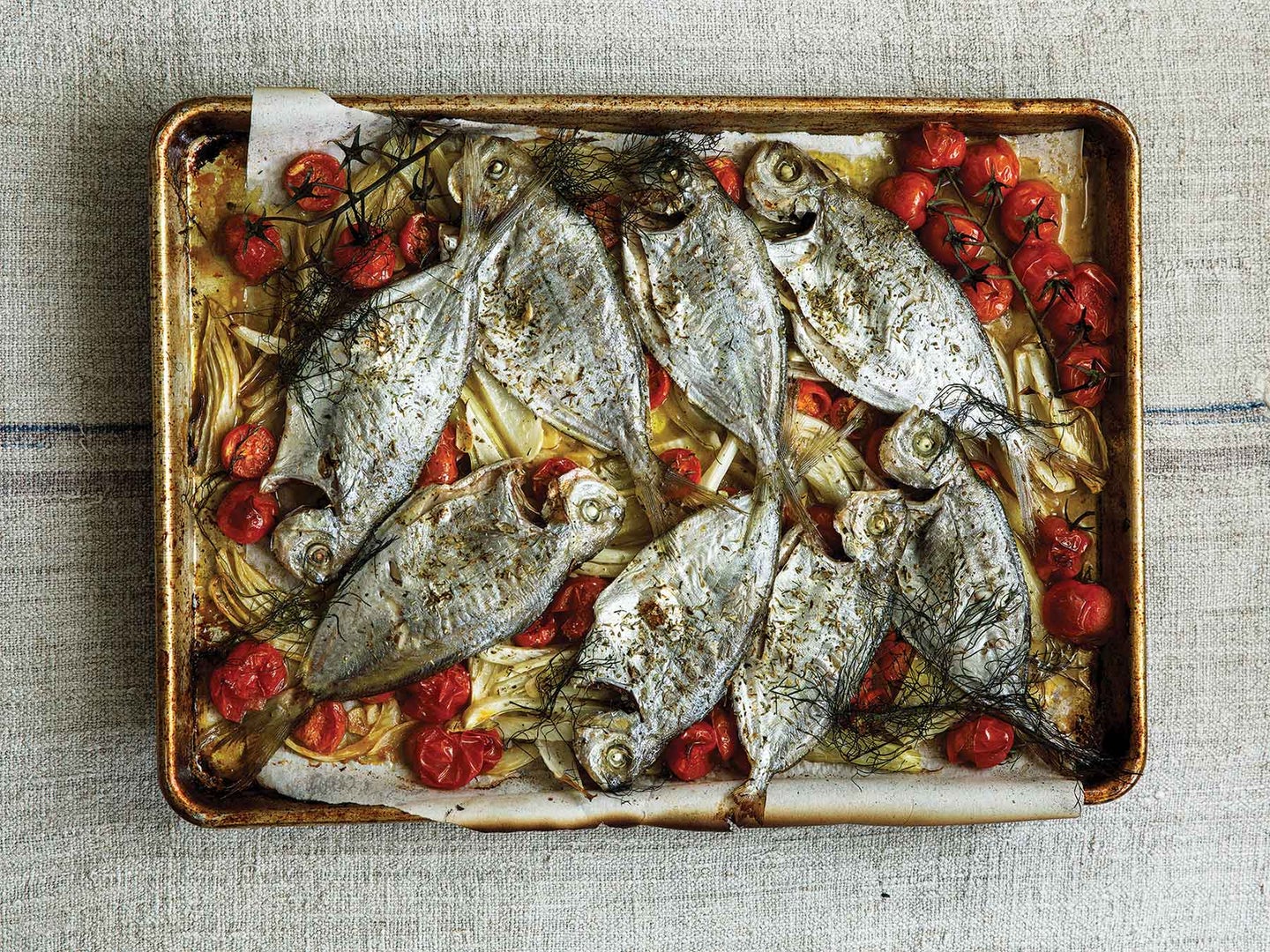 Get the recipe for Oven-Roasted Atlantic Butterfish with Fennel and Tomato ». Maura McEvoy
SHARE

Check out all items from the Saveur 100 »

11. Best Excuse for Dinner and Dancing

Amid the dark, early days of curve-flattening, when a peculiar combination of anxiety and lethargy sucked the life from every…housebound…moment, José Andrés came to my rescue. Yes, that José Andrés, the superhero chef who magically appears wherever disaster strikes, offering sustenance to those affected by cruel twists of weather, politics, or plague. Only now he was in my kitchen, doling out #recipesforthe­people via Instagram. Time both slowed down and sped up as I watched @chefjoseandres attempt a home-cooked meal from start to finish during a single song—usually selected by his three daughters (ages 16, 19, and 21), often from the musical Hamilton, and always played at a volume intended to encourage dancing. Dance he did while stir-frying ­leftovers, spilling shredded carrots and cabbage all over the stovetop, and pumping his fist in time to “Rise Up!” during “My Shot.” Suddenly, I could face my own three children with something akin to optimism. José Andrés—also stuck at home, also saddled with the nightly “What’s for dinner?” loop—had transformed the mundane into the magical. Thank you, Chef! —Catherine Tillman Whalen

I can’t bear adding to the 30.6 million tons of food waste dumped in US landfills each year. So, when New York City paused its curbside composting program this past May (­pandemic-related budget issues, they say), I went scrambling for alternatives. After a failed experiment in vermi­culture (the worms couldn’t keep up with my coronavirus ­cooking) and a frustrating experience with a backyard bin (you try maintaining the right carbon-to-nitrogen ratio), I finally discovered ­Vitamix’s ­FoodCycler. The size of a bread machine and as quiet as a dishwasher, this machine transformed eggshells, veggie peels, cheese, and meat bits into compost overnight (three to eight hours, depending on what’s in the bin). This is composting made so easy, maybe everyone will want to get on board. —Erin Scottberg

Kellie Thorn is the beverage ­director for Hugh Acheson’s Atlanta restaurants, Empire State South and By George. She’s also refreshingly down-to-earth. When Thorn does find herself sky-high, she orders the youngest cognac very little money can buy (usually a VS, or “very ­special” blend) and combines it with ­standard-issue apple juice. “I call this my airplane drink, but it’s also among my most irreverent mixes,” Thorn says. “The sweet juice softens the sharp edges of the young brandy.” Her ideal ratio: 2 parts ­cognac to 3 parts apple juice, tempered by a splash of soda if you’re feeling ­cautious and/or the flight is long.

14. Pork Cracklins Are So Last Season.

Fried fish skin has an umami factor that beats pigs, chickens, and other barnyard ­competition, fins down. At convenience stores in Singapore, we grab for Golden Duck’s fish-skin crisps, made from dory ($39 for five 4.4-ounce bags; the­goldenduck.co). Our favorite flavors: Salted Egg Yolk and the hotter Sichuan Mala Hotpot. After polishing off a bag of either, save the crumbs at the bottom to season noodle soup or boost a plain bowl of rice. —Shane Mitchell

Sustainable, a snap to clean, and strangely adorable (that underbite is kind of every­thing), itty-bitty Atlantic butterfish ($6.50 per pound; ­fultonfish­market.com) are tastiest in fall, once the species—Peprilus triacanthus—has had a chance to put on a few ounces. Cook this mild-­flavored bycatch of Rhode Island’s booming squid industry the way James Mitchell, the chef at Newport’s Midtown Oyster Bar, does: roasted in a hot oven, over a bed of ­tomatoes, fennel, and thyme (get the recipe here).

16. Food and Justice for All

I was an adult when I learned that my ­great-aunt routinely cooked for Dr. Martin Luther King Jr., and other civil rights leaders during the campaign to desegregate Albany, Georgia.

In ­social-justice movements, not everyone is called to march. Bravery and commitment can also be revealed in a homemade meal freely given in the spirit of mutual aid. From Leah Chase in New Orleans to Georgia Gilmore, who sold food to raise funds for the Montgomery bus boycott, Black women quite literally fed the front lines in every city where the ­movement of the 1950s and 1960s took hold.

I wish I could have peered into the kitchens of Allegra Tomassa Massaro and Gaïana Joseph this past summer as the two prepared sandwiches for the people protesting the police killing of George Floyd in New York City and Washington, D.C.

Massaro and Joseph, both graduates of Seven Sisters ­colleges, lead corporate lives by day: The former works in ethics compliance in D.C.; the latter is a project manager in Manhattan. Both also have Black skin. In a world where people have to be told that Black lives mean something, Massaro’s and Joseph’s achievements are no shield from bigotry or violence. They know this. So, to show solidarity, they put turkey, chicken, ham, and homemade pesto and mozzarella between slices of bread, then enlisted friends and family members, including their brothers Lorenzo Massaro and Roodharvens Joseph, to ­distribute the ­sandwiches to hungry marchers.

When the women shared their story on Instagram, neighborhood restaurants run by Black and other chefs of color offered to make food: the Bergen and Lakou Café in Brooklyn, and Sunrise Caribbean and Taste of Jamaica in D.C. Donations rolled in to pay the restaurants.

And so Massaro and Joseph’s initiative, which they christened Fuel the People, followed in the footsteps of the female bakers whose “Club from Nowhere” supported the Montgomery bus boycott—the footsteps of the great Dooky Chase down in New Orleans, and of my Aunt Lucy on Lincoln Avenue in Albany, Georgia.

The most consequential presidential election in decades is coming this November. Lines are likely to be long. People will get tired. They’ll get hungry. And it’s possible that Fuel the People will be there for them. There are so many ways to serve. —Rosalind Bentley

In Spanish, caramelo translates as “caramel.” In Mexican Spanish, it refers to a taco from northern Mexico filled with creamy queso Chihuahua and carne asada. But in the United States, Caramelo is the name of a company that turns out some of the country’s best flour ­tortillas in…Lawrence, Kansas? That’s home base for Ruben Leal, a University of Kansas administrator, whose homesickness for the ethereally thin tortillas de harina of his native Sonora, Mexico, led to this passion project. The results, small and freezable, are available in three flavors: duck fat (meaty), lard (delightfully porky), and avocado oil for the vegans. Of course, Caramelo tortillas make for great tacos, but they’re also delicious all on their own—as chewy and sweet as, well, caramel. —Gustavo Arellano

18. Looking for a Reason to Charter a Flight to Owls Head, Maine? Look No Further.

“Airport” plus “food.” Fairly recently, these two words added up to a punchline. Then Danny Meyer, Emeril Lagasse, and Rick Bayless began staking claims upon JFK, O’Hare, and LAX. Still, let’s be honest: Gordon Ramsay himself is not flipping those ricotta pancakes in Heathrow’s Terminal 5.

Casey Dominguez and Erin Armbruster, however, personally craft every single serving of lobster-corn quiche or vegetable curry served at the Salty Owl, the couple’s quirky café inside the Knox County Regional ­Airport of Owls Head, Maine (population 1,607). The husband-and-wife team’s most popular specialty—hand pies, both sweet and savory—is no surprise. “­Portable meals,” Armbruster ­explains, “are ideal for air travel.”

The shocker involves the number of repeat customers flying neither in nor out. “We had no idea,” she says, “that most of our business would come from locals. But in a small town, word travels quickly.” —Mindy Fox

19. Networking in Her Chosen Field

Lane Selman, an ­agricultural researcher at Oregon State University, spent her first five years on the job connecting plant breeders and organic farmers in hopes of developing new varieties that address practical issues, like drought tolerance and pest resistance. Then, in 2010, while watching chefs shop at the Portland Farmers Market, Selman had an aha moment. Chefs, farther down the supply chain and closer to the end user, had an entirely different set of concerns. “All of these people,” she recalls, “the chefs and the farmers and the plant breeders, needed to be talking to each other.” So she invited about 30 farmer and chef friends to evaluate nine sweet peppers in development at OSU. After sampling them raw, roasted, and sautéed, the group gave five ­peppers high marks for flavor, but the chefs saw only one viable option: the pepper with the roundest shoulders and straightest walls, traits that speed up prep and reduce food waste in a commercial kitchen. “It was so reasonable,” Selman says. “In hindsight, it seems ridiculous that I didn’t see it sooner.” The following year, she founded the nonprofit ­Culinary Breeding Network, which keeps everyone in touch through tastings held around the country, while also educating the public via funky, veggie-centric zines. One recent success story: a broadleaf kale named Simone, a vigorous grower with flavorful, multicolored leaves that are far easier to de-stem than most varieties.

20. Baby Food We Eat by the Fistful

Now widely considered a back-seat ­diversion for car-seat-bound toddlers—yet once served, alongside martinis, by Julia Child—Pepperidge Farm Goldfish got their start in 1958 as a tribute to the wife of the cracker’s Swiss inventor, Oscar J. Kambly. (The beguiling Mrs. Kambly was a Pisces.) Four years later, Pepperidge Farm brought the recipe to America, and one of our most iconic nibbles was born. Always equal parts high and low, the snack embraced unabashed sophistication in 1969, with the introduction of its sublime Parmesan flavor. Enjoy them, as Julia might have, with ice-cold gin and a dollop of caviar. —­Cara Cragan