The Elemental Ingredient in My Latin American Pantry 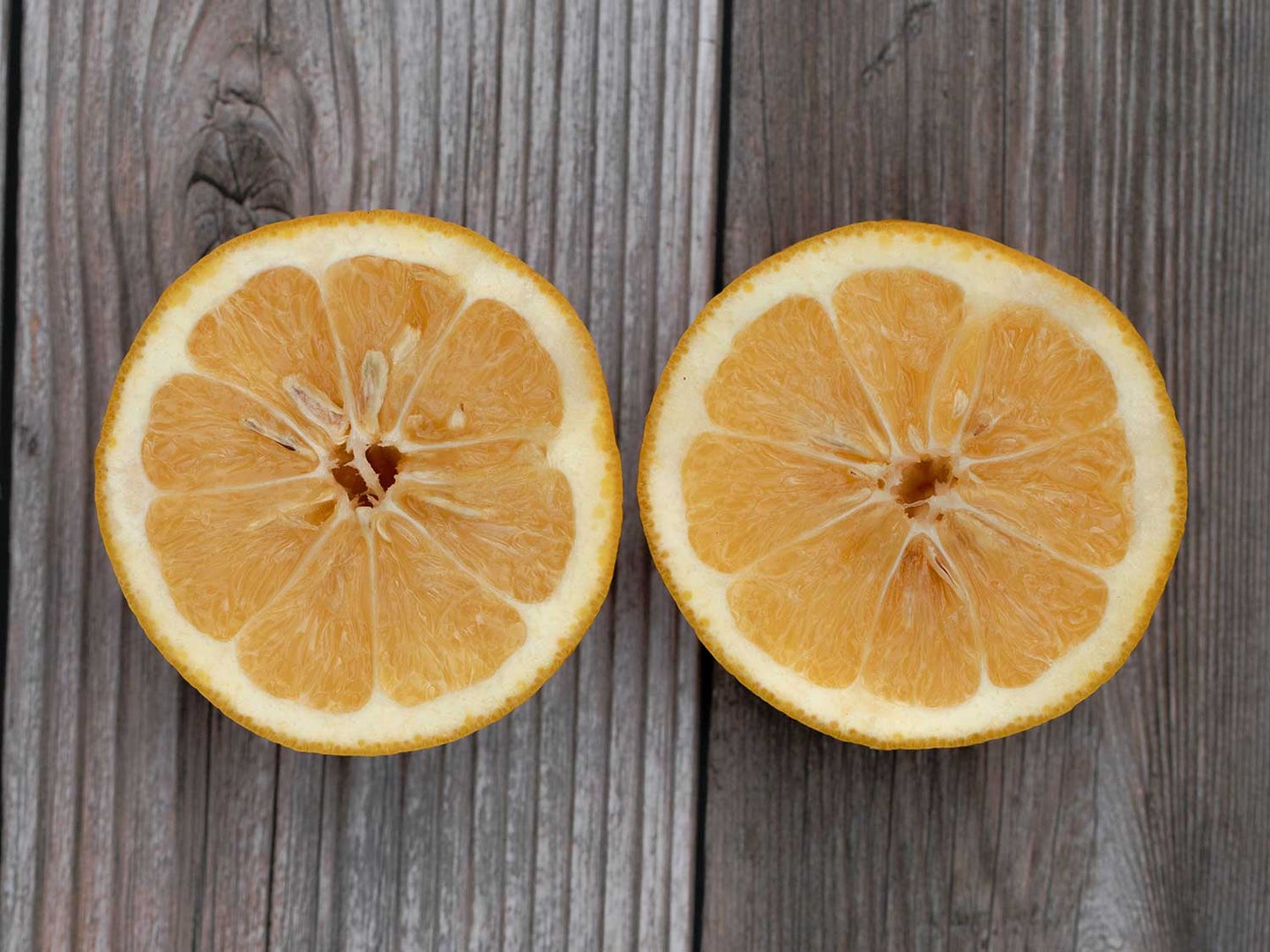 The inimitable Seville orange has a flavor and fragrance that, when used in savory cooking, is nothing short of magical. Chloe Zale
SHARE

In Latin American and Caribbean markets, next to the mountain of limes, you will almost always find a bin of wrinkly, splotchy citrus fruit. These humble orbs—Seville oranges—shouldn’t be overlooked. They impart a unique combination of bracing bitterness and subtle acidity to savory and sweet dishes alike.

For many, this roughly baseball-sized fruit may be familiar from its headlining role in orange marmalade, to which it lends its characteristic bite. Others might know it as the key flavoring agent in orange liqueurs like Curaçao and Grand Marnier. The fruit was also used in early versions of duck à l’orange. But this particular orange is, especially in Latin American and Caribbean cuisines, much more fundamental to savory home cooking.

Like all citrus fruits, the Seville orange—also known as the bitter orange, or sour orange—is best when firm and heavy, becoming soft and somewhat mushy with age. However, a bit of time doesn’t compromise the flavor and fragrance of its tart juice and aromatic zest. Many Latin American groceries (and of course, Amazon) stock bottled versions of the juice, which are often labeled “naranja agria” and are typically shelved by the vinegars and marinades. The packaged product is a decent substitute, but it lacks the lively nuance of the fresh stuff.

In a good Seville orange, oily and aromatic skin easily gives way to thick, bitter pith, followed by its heavily seeded segments. In her book Gran Cocina Latina, chef and culinary historian Maricel E. Presilla describes the fruit’s flavor as a “careful blend of lime, grapefruit, and orange juice with a small amount of grapefruit or sweet lime zest.” Ana Sofía Peláez writes in The Cuban Table: A Celebration of Food, Flavors, and History that, absent Seville oranges, “equal parts of freshly squeezed orange and lime juice can be substituted.” For me, though, the Seville orange is inimitable, with an aroma and elegant tartness that can lift flavors without turning foods sour.

Presilla, an authority on the cuisines of Latin America, suggests that the fruit likely originated in Southeast Asia and was brought to the Middle East and North Africa, where it is still used to make orange blossom water. The oranges were likely introduced in Spain by Moorish invaders from North Africa sometime around the turn of the 8th century and, for 500 years or so, long before the popularization of sweeter varieties, were Europe’s de-facto citrus. Southern Spain was historically—and still is—the center of European cultivation, and its Andalucian city of Seville gave the fruit its name.

Miami-based Miguel Massens—the Cuban American chef behind the Caribbean restaurant, Antilia—was working at restaurants in Andalucia and learning about the origins of Cuban cuisine when he encountered the fruit growing plentifully in the region; he recognized the Seville variety from the Cuban food he grew up eating. But beyond marmalade, the fruit didn’t feature in Spain’s local cuisine as he had imagined. In fact, he only encountered one paella master who used the pruned branches as cooking fuel.

As with many foods that the Spanish and Portuguese brought to the Americas, the Seville orange became an integral part of Latin American cooking. Seville orange trees were likely the first citrus to take root in the Western Hemisphere after Columbus introduced them to the island of Hispaniola (present-day Dominican Republic and Haiti) on his second voyage in 1493. Because it adapts particularly well to a wide range of climates, the fruit subsequently propagated throughout the Caribbean islands, the Yucatán Peninsula, and eventually into Central and South America.

Worlds apart from Cuban mojo, this red Canarian version—made with chiles, wine vinegar, and olive oil—is considered by many to be the ancestor of the citrusy Caribbean condiment. Monica R. Goya

Massens encountered another source of Cuban food traditions when he visited Spain’s Canary Islands. The chef was already familiar with mojo, an essential condiment and marinade in Cuban cuisine, but the Canarian mojo he tasted was different. Whereas the Cuban sauce he knew combined Seville orange juice, lard, garlic, and oregano, this Canarian version was made with wine vinegar, olive oil, chiles, garlic, cumin, and smoked paprika. Nevertheless, the connection was clear.

Many Canarians arrived in Cuba as early as the 17th century, when government officials in mainland Spain believed that the islands had an overpopulation problem. The Spanish Crown decreed that Canarians would be subject to a so-called “Tribute of Blood.” This tribute forced five Canarian families to be relocated to the American colonies in exchange for every ton of goods those colonies shipped back to Spain. In both the 19th and 20th centuries, economic struggles forced subsequent waves of Canarians to emigrate to the Americas; Cuba was usually the first stop on the voyage, and many made their home there. These immigrants, no longer able to grow olives and grapes, likely adapted their traditional mojo recipe to use locally available citrus juice and pork fat.

Seville oranges also play a significant role in Haitian cooking. Luz Bryson, a Haitian American home cook based in Atlanta, described to me how her mother uses zoranj su (the fruit’s Haitian-Creole name) “to clean meat before marinating it.” Bryson explained that “the bitterness of the sour orange not only removes strong, gamey smells from the meat, but also tenderizes it.”

Bryson’s mother is not alone: Many cooks—from Haiti and beyond—extol zoranj su’s tenderizing abilities, which are similar to those of papaya or pineapple. Chef Massens, for one, notes that the juice can “tenderize meat in the same way that lime can affect protein in a ceviche.” In fact, my own Peruvian grandmother told me that ceviche was originally made using Seville orange juice. While key lime is now the citrus of choice for most contemporary Peruvian ceviches, some regional recipes still incorporate Seville orange juice, including ceviche de pato, a hot, cooked duck dish from the northern parts of the Lima Region, especially around the city of Huacho.

However, Seville orange juice doesn’t denature animal proteins (effectively “cooking” them) as aggressively as limes, which makes the oranges more versatile. Massens laments that despite the fruit’s potential, many cooks are “stuck on it for marinades.” Its juice can replace lemon or lime in desserts like key lime pie or lemon squares; in citrus-forward savory dishes like chicken piccata; or even in a Caribbean-inspired black bean hummus.

Mandy Baca, a Nicaraguan American food historian, mentioned to me that the Seville orange is one of two ingredients brought to the Americas that form the base of the Nicaraguan flavor profile. (The other is onions.) It even appears in one of Nicaragua’s oldest dishes, a nixtamalized cornmeal and meat stew called indio viejo, which is believed to have pre-Columbian roots.

Personally, though, my favorite way to enjoy naranja agria is closely tied to the nightlife of my hometown. In pre-pandemic Miami, I always looked forward to last call because I knew we would end up at a fritanga. These informal, cafeteria-style eateries, which originated in Nicaragua, are famous for offering affordable, freshly made food like Nicaraguan tacos (similar to Mexican flautas), vigorón (cabbage slaw with boiled yucca and pork rinds), queso frito, and carne asada. Many serve food into the early morning hours, some even 24 hours a day. Miami-Dade County—particularly the city of Sweetwater—has the largest concentration of Nicaraguan immigrants in the United States, so it’s no surprise that this beloved Central American dining institution would also find a home in the Magic City.

Two favorite Miami fritangas, Yambo and Pinolandia, have been serving Miamians heaping plates of inexpensive, stick-to-your-ribs food for decades. Their specialty carne asada is a char-grilled skirt steak marinated in bright Seville orange juice and onions. Inspired by that aromatic dish, I developed my own recipe to recreate the sensory pleasures of this fritanga staple at home. With a side of gallo pinto (red beans and rice), curtido (a vinegary cabbage slaw), and fried sweet plantains, it’s the perfect meal at the end of a long night and a welcome introduction to a truly beautiful fruit.

Get the recipe for Nicaraguan-style carne asada »