One of the basic pantry staples of kitchens around the world, canned tuna is a uniquely affordable, shelf-stable, and versatile ingredient. The best canned tuna needs no garnish or fuss, while budget options star in salads, sandwiches, and casseroles.

“Really good canned tuna can be as good, if not better, than a fresh piece of fish,” says Anna Hezel, a senior editor at Taste and author of a forthcoming book on tinned fish. Because the tuna processing happens immediately after it is caught, it creates what she calls “a little time capsule,” that lets you taste the fish as it did when it left the water.

Some Americans are only familiar with the staple grocery store versions of tuna. But in Spain and Portugal, generations have worked to create the best technique for preserving—and even enhancing—the flavor of the fish. “Europeans take pride in it,” says Bryan Jarr, owner of Seattle’s JarrBar, where the menu centers on tinned fish.

Part of this he chalks up to aesthetics, noting that imported fish comes in cans with attractive labels and sizes. Even the top domestic companies, which sell the late-summer albacore that runs up the nearby Pacific Northwest coast, often end up forced into the standard round can size by manufacturing costs. “It looks the same as a cat food can,” laments Jarr.

But inside, the best canned tuna shows off “real craftsmanship and care,” says Hezel. We tasted through dozens of brands and styles from both Europe and the U.S. to find the best tuna on the market, whether you just want to snack on it alone or plan to use it to stretch a budget or a meal, as people all over the world have always done.

Oil-packed tuna helps make sure the fish stays moist by preserving it in the added fat. Hezel tends toward oil-packed tuna, though she notes if you are making a tuna salad and plan to add mayonnaise anyway, then water-packed fish works easily. Jarr also points out that, because olive oil is expensive, the oil-packed fish often tends to be slightly higher quality since it makes little sense to spend money putting good oil on bad fish. And, one of the bonuses of fish canned in good olive oil, says Jarr, is that its flavor actually improves as it ages, making it a terrific pantry item.

Neither Hezel nor Jarr worry about country of origin with their canned tuna. “Tuna runs run,” says Jarr, meaning that the same fish travel from country to country.

While BPA-lined cans became the food-packaging concern de jour in the 1990s, the reality is that the chemical used in some cans is not a major concern. “Studies pursued by FDA’s National Center for Toxicological Research (NCTR) have shown no effects of BPA from low-dose exposure,” wrote David Neimanis for Heated in 2020. While some canned tuna brands, like St. Jude, specifically call out their product as BPA-free, shoppers don’t necessarily need to factor it into their equation to figure out the best canned tuna.

While tuna is a huge tribe of saltwater fish, canned tuna mainly sticks to a few specific species.

Skipjack is a medium-sized fish, with less flavor than some of its fellow tuna. It tends to be the best option for small budgets and for mixing into dishes where another ingredient will bring much of the flavor. The smaller fish has less mercury, which is helpful if you plan to eat a lot or are trying to avoid mercury. This will also sometimes be labeled “light,” though that is not an official term and can include other species as well.

Albacore is slightly larger than skipjack. “I love albacore,” says Jarr. “I think it has amazing flavor; it’s very versatile.” Beyond that, he likes how sustainable it is, and that much of the best albacore comes from right nearby in the Pacific Northwest. This is also sometimes labeled as “white,” while Spanish albacore is called Bonito del Norte.

Yellowfin are the largest of these species. It has slightly darker, tougher meat, tends to have the highest mercury levels of these species, and is the most threatened. However, it brings big flavor, and yellowfin in oil can be a great option for dishes where the tuna is dressed only lightly.

“Look for something meaty, with distinct structure,” suggests Hezel. Most canned tuna comes from the loin. Higher quality canned tuna will be a whole slice of loin; you should be able to look into the tin and see that it is still in the original shape. If you are using the tuna to make tuna salad or something else that doesn’t rely on the texture, a can labeled “chunk” can save you some money, since that will be chunks of tuna.

The lowest budget option, flake, is—as implied—just flakes, already in pieces. However, especially in lower-end tunas, we found this had a mushy and unpleasant texture compared to  a chunk or loin piece that we flaked ourselves.

For the best canned tuna, especially to eat as a snack or on its own, look for ventresca, which is tuna belly. Like in sushi, where the coveted toro comes from the belly, this is a richer, more buttery cut of fish, since it comes from the part of the tuna that stores the fat. 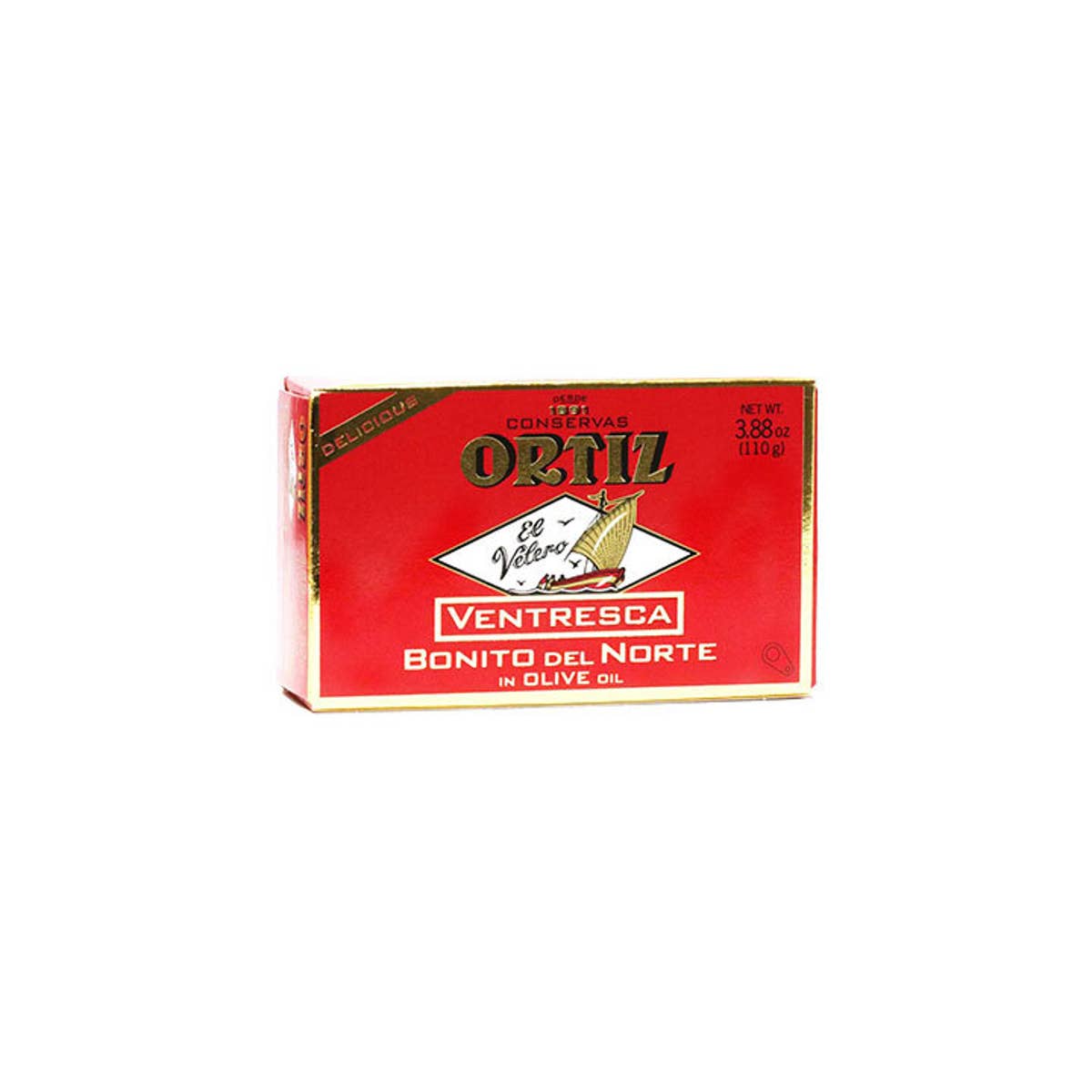 This tender, rich tuna belly, bathing in high-quality oil, pulls out of the can in silky strands. With a texture more akin to something at the sushi bar than in a can, and a complex flavor that stands up to the fruity oil, this fine product needs no condiment or fixing. In fact, the brightly colored oval can even work as an attractive, table-worthy serving vessel. 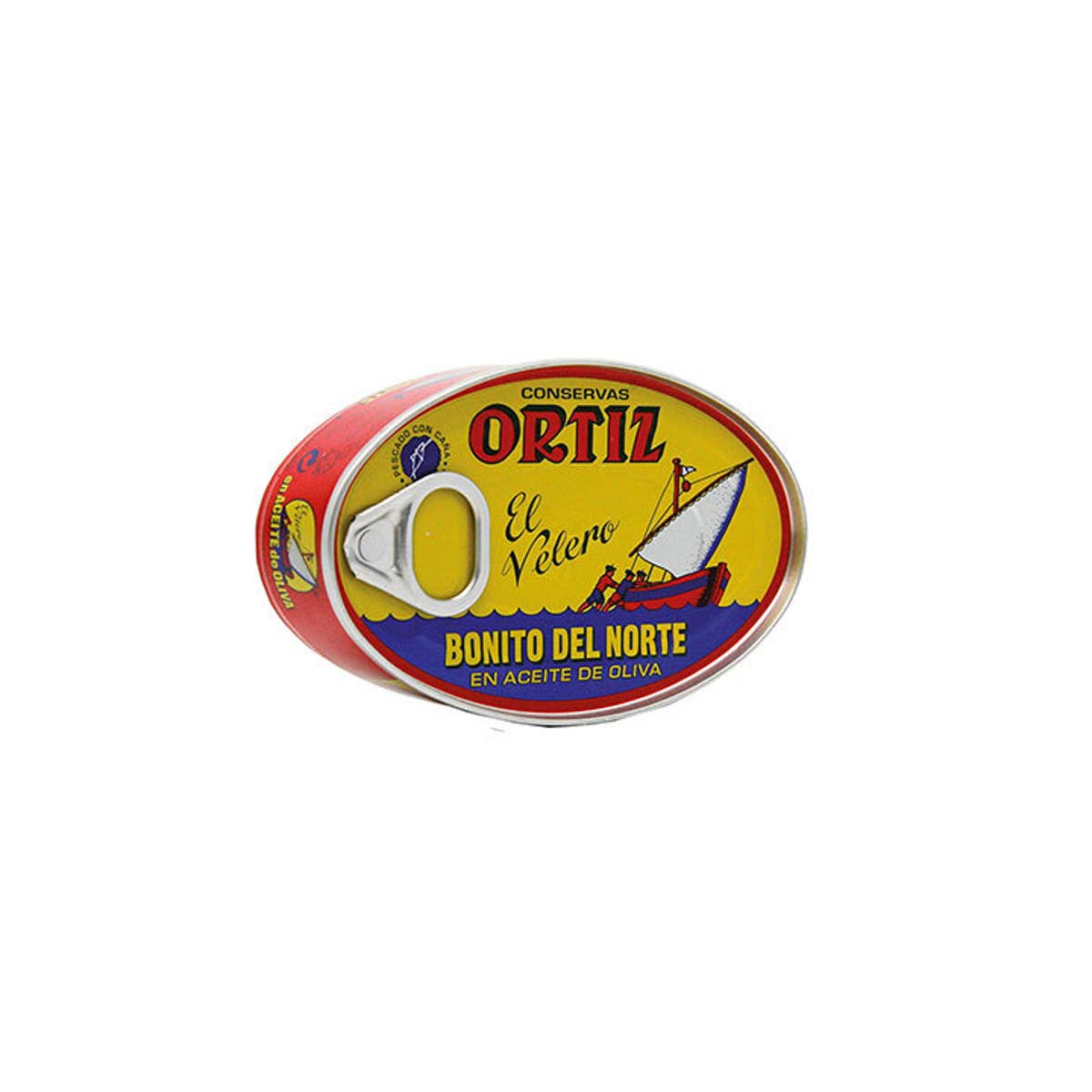 This is technically a tie with Arroyabe Tuna in Olive Oil. “They’re the same product,” says Jarr, who has visited both companies at their Spanish facilities. In the jar, they are nearly identical, though similar tin weights get you a bit more tuna from Ortiz. But the key is that both have big, full, tightly packed loins in good olive oil that flake gently off and have a clean, light flavor. Oritz stands out as slightly more affordable at $6 per tin (when purchased in a pack of four), which is about half the cost of the ventresca, but still works for something like a salade Niçoise that lets fish be the star. 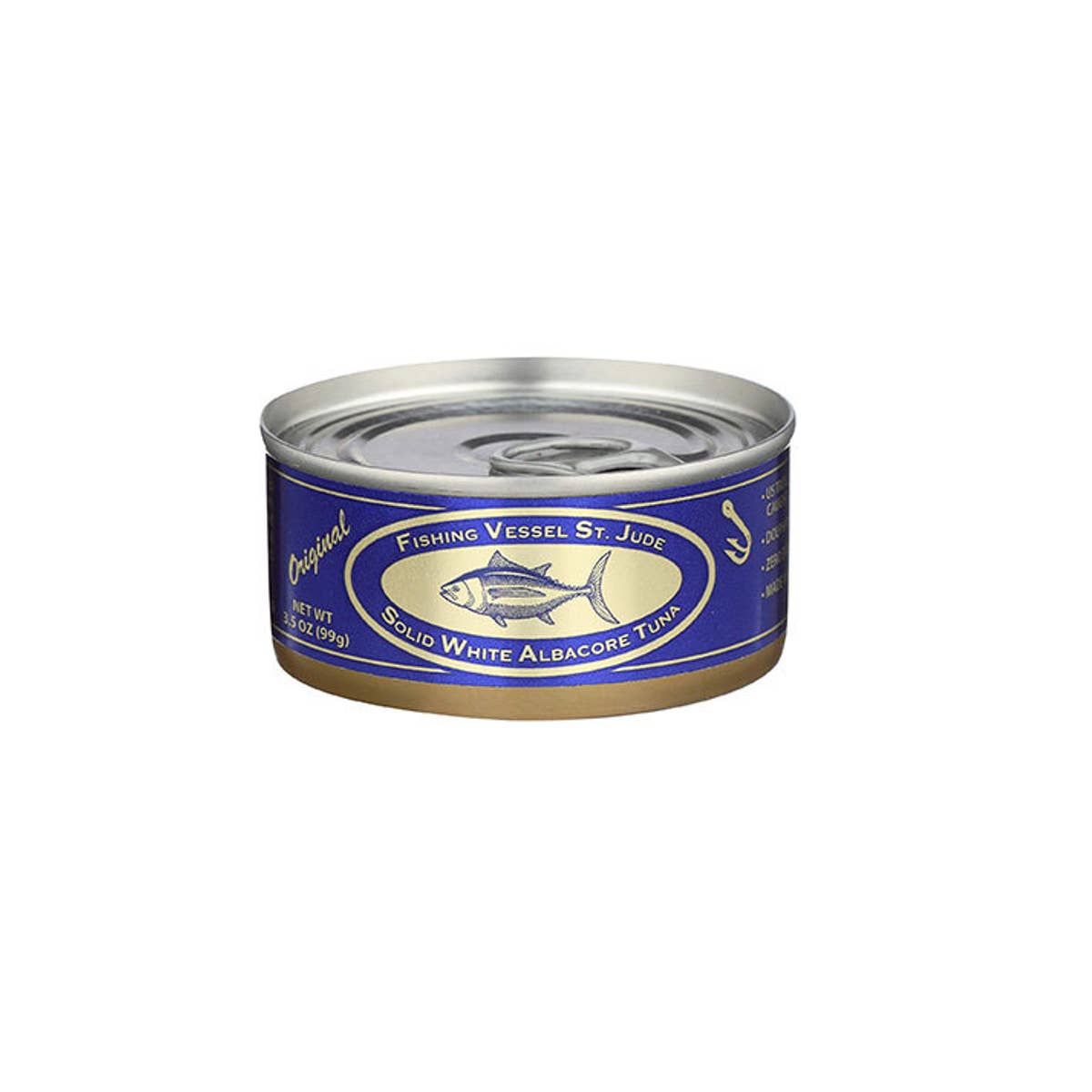 This Seattle ship follows the albacore as they run from the Pacific Northwest down to the South Pacific, returning with troll-caught tuna loins canned in its own juice that come out of the can completely intact. Even without the addition of oil, the big, almost meaty flavor of the albacore comes through cleanly. While it could work in a mayo-based dish, there’s no need to dress it beyond a hit of lemon and salt. 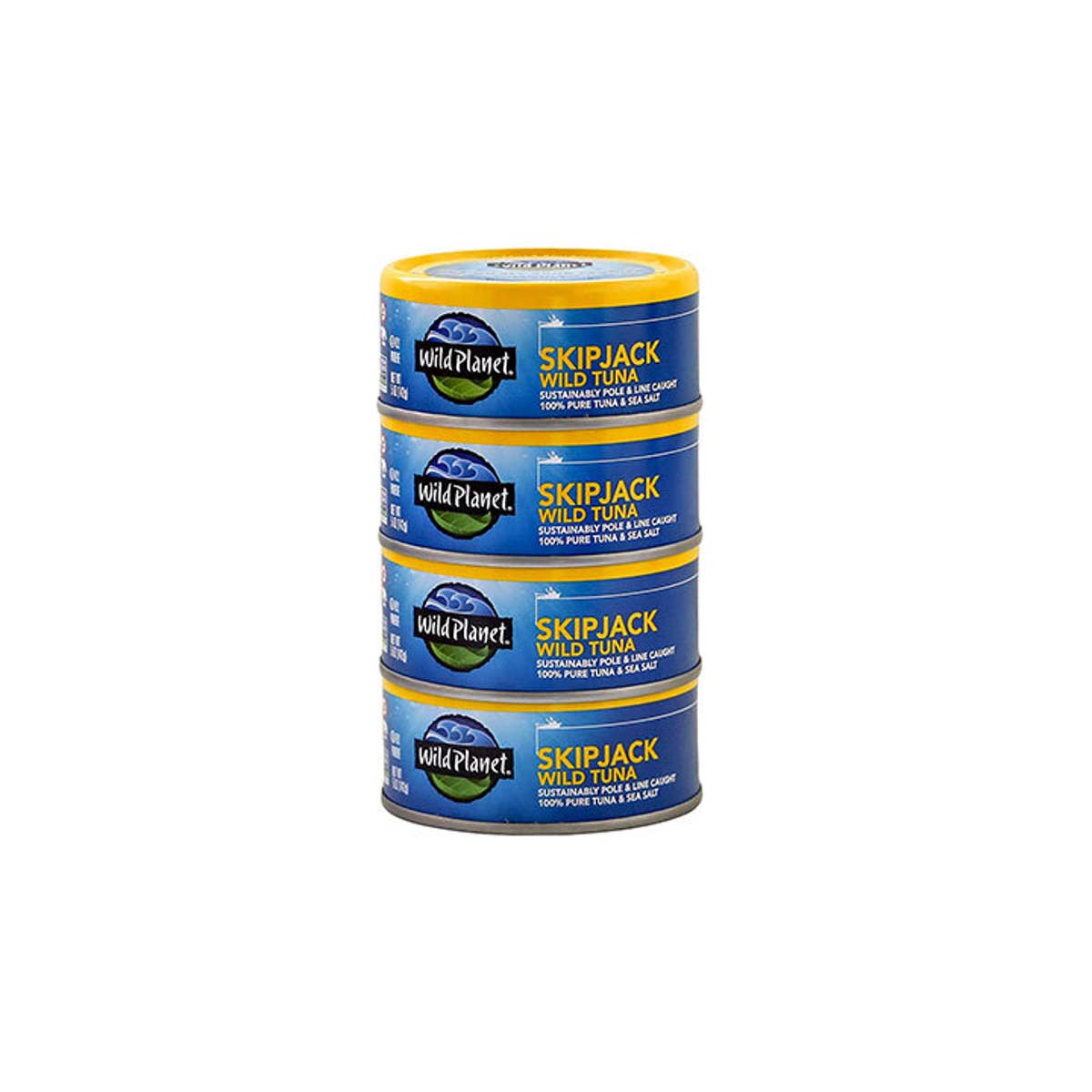 Both of Wild Planet's skipjack can options - with and without olive oil - brought significantly better flavor and texture than other tinned skipjack. The oil-free version clearly had a single loin piece with a solid texture and big tuna flavor. The tuna was fairly dry, but given that this is best used in a tuna salad or similar, that just comes with the oil-free territory. The oil-packed version also had a big loin slice with smooth texture and no off flavors. 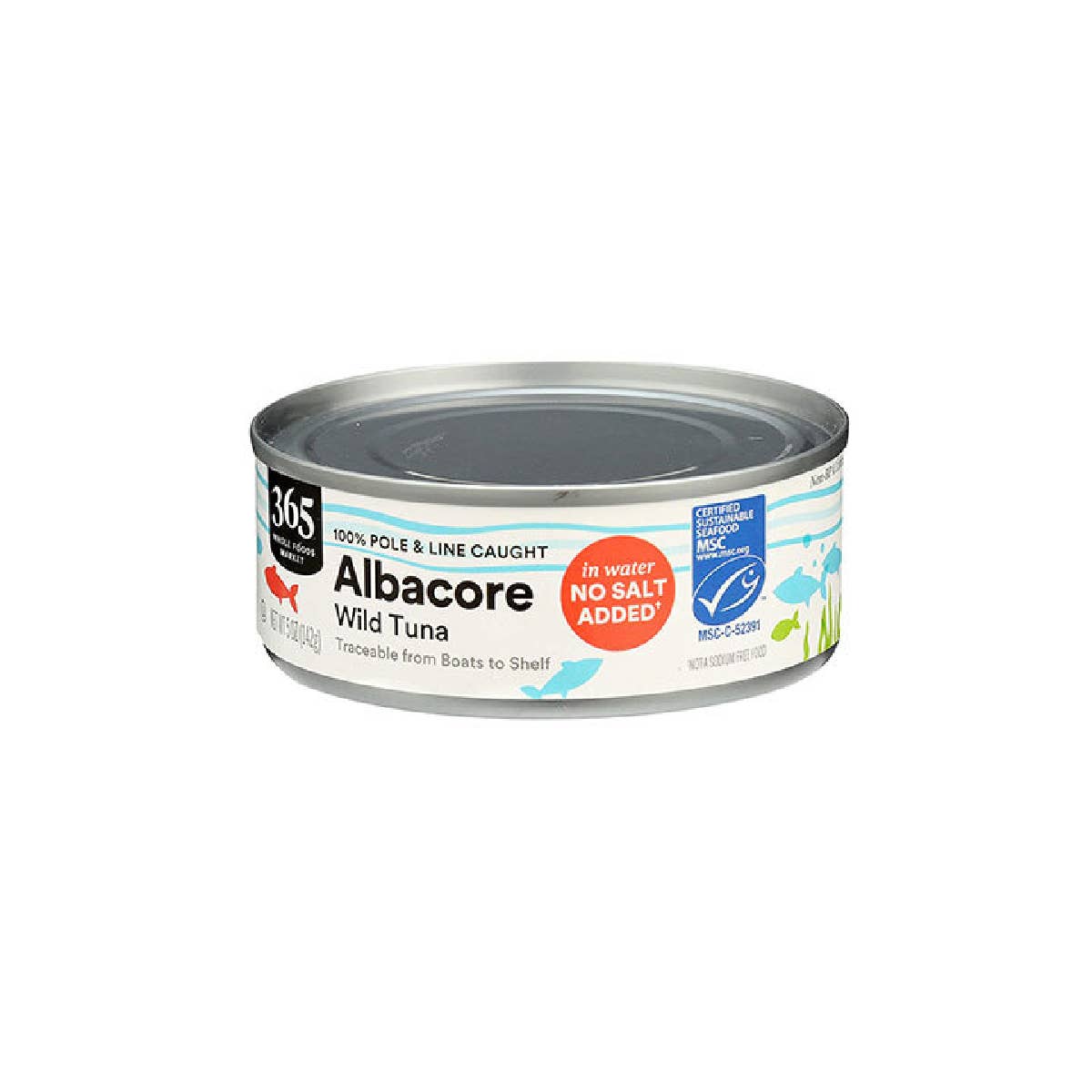 Unless you have a specific dietary restriction and need to avoid salt, avoid the salt-free tuna cans, as they were overall blander, and somehow both dryer and mushier than their salted equivalents. However, if you do need to try them, this one stood out from the bunch. Though it was flake, rather than loin, it managed to avoid getting mushy, and it was the only brand where the fish carried a strong and natural tuna flavor, even without the salt. 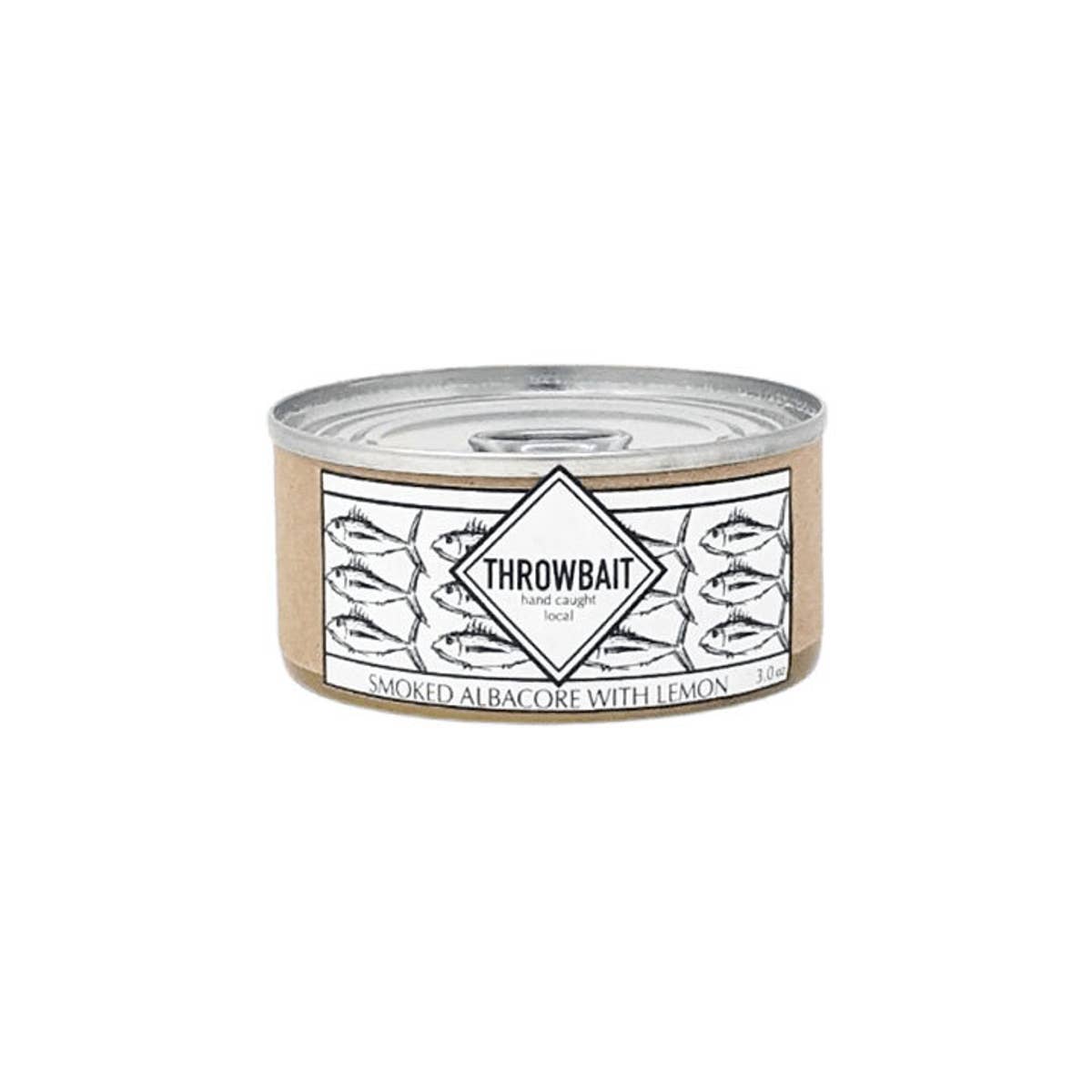 While most of the flavored tunas end up tasting like that brand’s standard tuna with a layer of flavor dumped on top—a significant step down from, say, just sprinkling some Cajun seasoning or dried herbs on it yourself—Throwbait’s version was one of the only that really improved the tuna and turned it into something not easily done better at home. The smoke pervaded the tender meat, and the lemon stayed subtle, just brightening the already excellent tuna without overwhelming.

Q: What should we look for when it comes to mercury?

“Mercury is hard because it’s this naturally occurring element that is in our water system,” says Hezel, which means it is in a variety of meat and fish. “The reason we talk about it with tuna is because tuna tend to be larger fish that live longer and eat a lot of smaller fish that have their own mercury levels.” That means that a really big fish—like a 200-pound yellowfin tuna—winds up accumulating some mercury over the course of its life. While certain brands like SafeCatch test each fish for mercury, Hezel and Jarr both recommend looking for fish that tend to be smaller or, like the Spanish bonito del norte, fished very young, so they don’t have time to accumulate much.

Q: How do we know if the tuna is sustainable?

“I like to look on the label to make sure it was line and pole caught, ideally, or trolling is another one that’s minimally invasive,” says Hezel, which makes them more sustainable. “It’s a little more precise, there’s less of a chance of catching bycatch.” (Bycatch is other species unintentionally caught in the fishing process.) For our tasting, we stuck to brands that claimed to use the above mentioned sustainable methods.

“Tuna takes what you put in there,” says Jarr. “Even just some basic seasoning can make a night and day difference.” His favorite way to serve canned albacore is with Aleppo pepper, lemon, and sea salt, which lets each diner adjust the spice, saltiness, and acid as they squeeze and sprinkle it over the fish. Both he and Hezel gravitate toward harissa as a go-to condiment with their tuna, too. But the best canned tunas need little garnish to serve alone or with crackers and olives on a snack plate, while their lower-budget brethren can sit on a shelf until a craving hits for a nostalgic favorite.