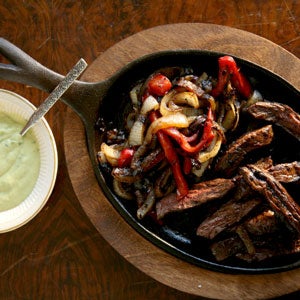 Green sauce, the spicy avocado cream sauce that is originally from Ninfa’s in Houston, is a Texas standby. The recipe for this dish is based on one that appears in The Tex-Mex Cookbook by Robb Walsh (Broadway Books, 2004).

Recipe for Tex-Mex steak fajitas with green sauce, the spicy avocado cream sauce that is orginally from Ninfa's in Houston.
Yield: serves 6-8