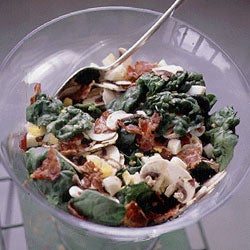 Three kinds of spinach are typically sold in the United States: crinkly savoy, which is the most common strain; flat leaf, generally preferred for salads; and semi-savoy, a cross between the two. Whichever variety you use for this salad, be sure to wash it very well—residual grit ruins a spinach salad—then dry it thoroughly. This recipe is based on one in First You Take a Leek (Charles E. Tuttle Company, 1981) by Maxine J. Saltonstall.