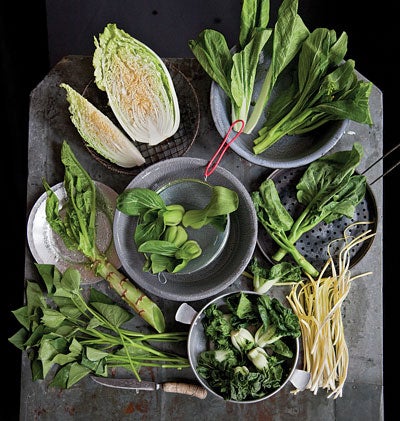 The easiest to find is crunchy Napa cabbage, which is particularly prized in China, where it’s used in everything from hearty dumplings to soups. Bok choy is also widely available in the U.S., especially the tender “baby” varieties like the green-hued, round-leafed Shanghai bok choy and the squat dwarf bok choy; you can simply cut heads of both varieties in half lengthwise and stir-fry them with meat or chicken. Increasingly, you will find more obscure types, like Taiwanese bok choy, a longer, thinner version. Another Chinese green, gai lan, also called Chinese broccoli, is popular for its broccoli rabe-like flavor and its crunchy stems, which take well to blanching or steaming. Gai lan‘s more fibrous cousin, choy sum, or oil seed rape, which is popular in Southeast Asia, has an even more bitter, mustardlike flavor and fibrous stems. Even some ingredients that are considered specialty items in Asia are making their way to our shores: spinachlike yam leaves can be found in cities like Minneapolis and St. Paul, Minnesota, where Hmong and other Southeast Asian immigrants have settled; try stir-frying yam leaves with sliced red chiles. Stem lettuce, or “celtuce,” long popular in China, has a crunchy texture and asparagus-like flavor; it tastes great raw in salads dressed with garlic, vinegar, and soy sauce. Yellow chives, which are simply green chives grown in the dark, add a cheerful color and subtle sweetness to stir-fries.