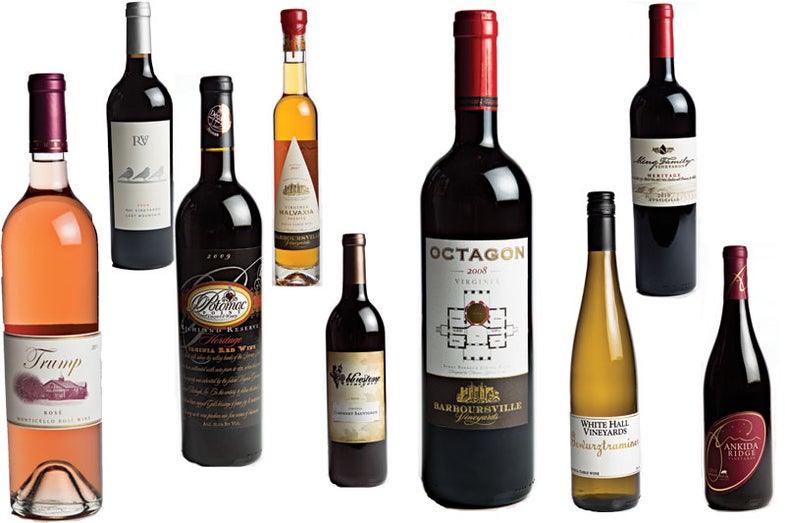 The story of vinifera in Virginia begins—and, for a couple of centuries, ends—with Thomas Jefferson. A Francophilic wine buff, the third president planted imported vines that failed, blighted by the parasite phylloxera. Contemporary winemakers have been more successful, while retaining Jefferson’s Continental bent. Indeed, it’s surprising how many Europeans you meet at wineries in the Piedmont and other mountainous Virginia areas—until you check the weather report. “The difference between a good and a great year in Bordeaux is when and how much rain comes,” says Jay Youmans, head judge of the Virginia Governor’s Cup wine competition. “Bringing over Europeans with experience with those conditions makes a lot of sense.” Where 30 years ago, red wines here had a vegetal quality, today trellising and other methods that help grapes ripen and inhibit mildew have resulted, in particular, in polished, food-friendly Bordeaux-style blends.

RdV Lost Mountain 2009 ($88) The celebrated new kid on the block, this Northern Virginia winery has worked with a consultant from L’Universite de Bordeaux to create stunning blends in the manner of that French region. This intense cabernet sauvignon-driven red smacks of liquorice and ruby port; it would be dynamite with a steak au poivre.

**Trump Monticello Rose 2011 ($14) **A blend of cabernet sauvignon, cabernet franc, and merlot goes into this crisp, minerally rose. An aroma of fallen leaves and underbrush along with a Bing-cherry, slightly floral flavor makes it a lovely bottle for Thanksgiving; it can pair successfully with the turkey and fixings as well as the pumpkin pie that follows.

**Potomac Point Richland Reserve Heritage 2009 ($29) **The winemaker is Italian, but the blend (nearly half merlot, with cabernet franc, cabernet sauvignon, and petit verdot) is all Bordeaux in this soulful red from the banks of the Potomac. Its bacony, meaty character makes it a great wine for barbecued meats.

**Barboursville Malvaxia Passito 2007 ($32) **Modern Virginia winemaking started here in 1976 when an Italian wine scion, Gianni Zonin, established a vineyard (and, later, an inn) on an estate graced with the picturesque ruins of a Jefferson-designed stately home. This lush dessert wine is made with a white Mediterranean variety that is air-dried for four months to concentrate its richness. It tastes deliriously of ripe apricots.

Bluestone Cabernet Sauvignon 2010 ($30) From the Shenandoah Valley on Virginia’s western border comes this beautiful cabernet, whose character is in perfect poise between bright acidity and dark, oaky tannins; between velvety, stewed-fruit flavors and smoky spice. It would be wonderful with a slow-cooked winter stew, especially if you save a few sips to enjoy with a chocolate dessert.

Barboursville Octagon 2008 ($50) Perhaps Virginia’s most prominent bottle, Barboursville’s flagship wine deserves the attention it gets. A big but balanced Bordeaux blend in which the cabernet sauvignon really stands out, it’s full of the energetic black fruit, chocolate, and coffee notes that pair so well with beef.

White Hall Gewurztraminer 2011 ($20)Though it might surprise wine drinkers who think of gewurtztraminer as a cold-climate grape, the aromatic white variety does well in temperate Virginia. This Charlottesville-area winery blends in petit manseng to lift the wine’s acidity. It’s less flinty than Alsatian-style gewurtztraminers, but more versatile: Its subtle, lychee-flower sweetness and hints of sage and spice make it a match for many dishes on the Thanksgiving table.

King Family Meritage 2010 ($28) Having worked throughout his native France, winemaker Matthieu Finot makes Meritage, one of Virginia’s signature Bordeaux-style blends, with an experienced hand. It shows in the bright, red berry flavors, toasty vanilla tannins, and delightful barnyard funk of this lithe red.

Ankida Ridge Pinot Noir 2010 ($35) It’s a tough grape to grow under wet conditions, but this vineyard pulls it off, creating a light-bodied pinot noir that strikes a balance between jammy California fruit and earthy Burgundian flavor. It’s a great wine for pork.

Back to 37 Great American Wines »

See nine great wines from the Texas Hills and Plains »